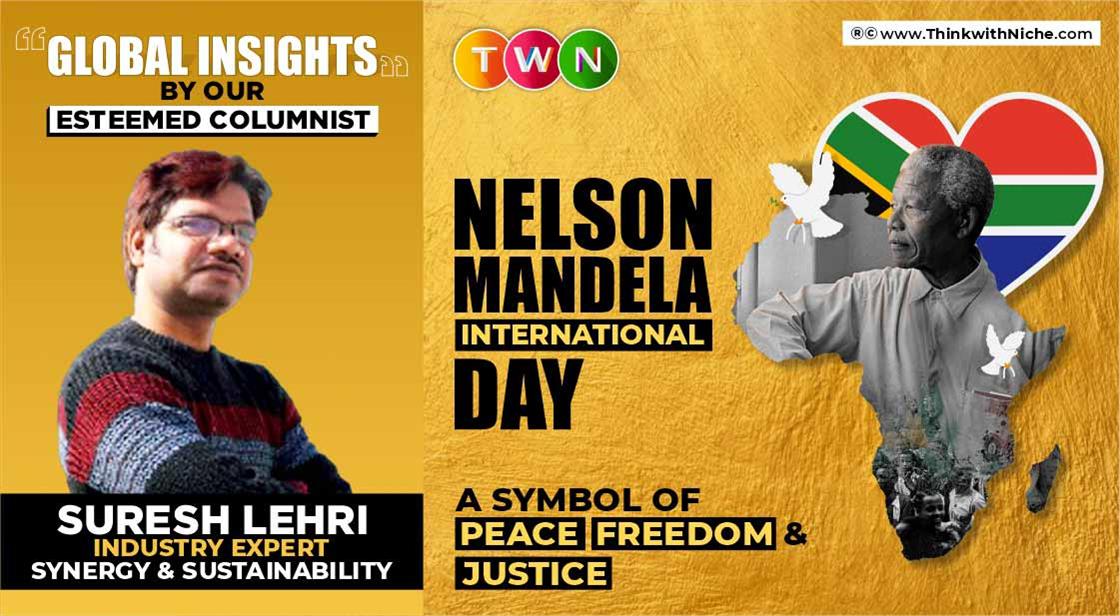 Nelson Mandela International Day is celebrated every year to celebrate the legacy of a man that changed the 20th century. It is an opportunity for everyone to reaffirm the values that Nelson Mandela embodied, absolute determination, deep commitment to justice, human rights, and fundamental freedoms. Nelson Mandela expressed a deep belief in equality and dignity for all women and men. Nelson Mandela was a great statesman and a tireless advocate for equality. He was the founder father of peace in South Africa. Mandela, also known as the "Gandhi" of South Africa, shared a special relationship with India. He was a firm follower of Gandhi's teachings. After his release from prison, India awarded him the highest civilian honor, Bharat Ratna. In 2001, the Indian government also gave him the International Gandhi Peace Price for his peacemaking efforts.

Nelson Mandela International Day is celebrated every year to celebrate the legacy of a man that changed the 20th century. It is an opportunity for everyone to reaffirm the values that Nelson Mandela embodied. Absolute determination. Deep commitment to justice, human rights, and fundamental freedoms. A deep belief in equality and dignity for all women and men. Unwavering engagement in dialogue and solidarity across all lines. Nelson Mandela was a great statesman and a tireless advocate for equality. He was the founder father of peace in South Africa. In the year 2022, the main theme of this day is 'Do What You Can With What You Have And Where You Are' to celebrate Mandela Day every day.

Nelson Mandela demonstrates the power to resist oppression, justice over inequality and dignity over humiliation in times of turmoil. He also shows us how to forgive and forget. Let us remember the lessons from Nelson Mandela's life and the essential humanism behind them as the world moves forward with the 2030 Agenda for Sustainable Development.

The Path of Nelson Mandela's Life

Nelson Rolihlahla Mandela was born in Transkei, South Africa on July 18, 1918. Hendry Mphakanyiswa, a member of the Tembu Tribe, was his father. Mandela was educated at the University College of Fort Hare, and the University of Witwatersrand, where he studied law. In 1944, he joined the African National Congress and was involved in resistance to the apartheid policies of the ruling National Party after 1948. From 1956-1961, he was tried for treason and was acquitted in 1961.

Related: Positivity Is The Key To Success

Nelson Mandela argued that the establishment of a military wing within ANC was necessary after the 1960 banning of the ANC. The ANC executive reviewed his proposal regarding the use of violent tactics in June 1961 and decided that members who wanted to participate in Mandela's campaign wouldn't be prevented by the ANC. Umkhonto we Sizwe was formed as a result. Mandela was detained in 1962 and sentenced to five years with hard labor. Mandela was arrested in 1962 along with many other leaders of the ANC, the Umkhonto we Sizwe, for plotting against the government through violence. His statements from the dock attracted a lot of international attention. Eight of the eight accused, including Mandela were sentenced to life imprisonment on June 12, 1964. He was held at Robben Island Prison off Cape Town from 1964 to 1982. After that, he was transferred to Pollsmoor Prison on the mainland.

Nelson Mandela's fame grew steadily during his time in prison. Nelson Mandela was widely recognized as South Africa's most prominent black leader and a powerful symbol of resistance to the growing strength of the anti-apartheid movement. To obtain his freedom, he refused to compromise on his political position.

Nelson Mandela was released on February 11, 1990. At the 1991 first national conference of ANC in South Africa, Mandela was elected President. Oliver Tambo, his long-time friend and colleague, became the National Chairperson.

The Greatest Freedom Symbol of Africa

Nelson Mandela, the son of a chief and a lawyer, became South Africa's first black lawyer. In the 1950s, he was elected to lead the youth wing (African National Congress liberation movement) of the ANC. Mandela was convinced that armed struggle was inevitable after the country's white minority government banned the ANC in 1960. He was inspired by the guerrilla warfare in Cuba and Algeria, and he set up a military underground organization that engaged in sabotage. He was arrested in 1962 and sentenced to life imprisonment.

Mandela, also known as the "Gandhi" of South Africa, shared a special relationship with India. He was a firm follower of Gandhi's teachings. After his release from prison, India awarded him the highest civilian honor, Bharat Ratna. In 2001, the Indian government also gave him the International Gandhi Peace Price for his peacemaking efforts.

Nelson Mandela was a practitioner of Mahatma's Satyagraha philosophy, which combines Truth Force, passive resistance, and Ahimsa, or non-violence. Mandela often referred back to Gandhiji, his role model, and was inspired to lead South Africa's independence journey by Gandhiji. Although Mandela and Gandhiji did not meet, they were connected by a passion for ending oppression and bringing about change. They took up the cause of their colonized countries and their subjugated citizens and inspired them to resist oppression. Mandela was influenced by Gandhiji's philosophy, which influenced his sociopolitical career in South Africa. Although we can't compare Mandela to Gandhiji, there are some similarities between the leaders. Gandhiji stressed moral power as a force to be reckoned with, while Mandela believed in the power and moral uprightness of moral power. Both were lawyers who spent time at Johannesburg's Old Fort prison (Gandhiji, 1906, and Mandela, 1962). Mandela was sentenced to 27 years in Robben Island prison. He was there, among other classics, for meditation and reflection. Mandela and Gandhiji were united in their conviction that all oppressed people must unite against their oppressors, regardless of their religion, caste, or ethnicity.

It's a fascinating coincidence that two of the most influential and inspiring world leaders have a connection to South Africa. The journey of Mahatma Gandhi to become a Mahatma (or great spirit) began in South Africa. He was transformed from an ordinary subject under the British empire into a charismatic leader of India's peaceful and nonviolent independence movement. Gandhiji's philosophy and convictions challenged British rule in India, eventually leading to the handover of political control to them and, later, to other indigenous populations around the globe by colonial European countries. In South Africa, Gandhiji was overthrown by the apartheid regime after largely peaceful, non-cooperation protests.

1. Mandela was born Rolihlahla. This means that Mandela is a 'pulling the tree branch' or a 'troublemaker'. His teacher gave him the name Nelson on his first day in elementary school.

2. Nelson Mandela's wife, Graca Machel was the first to marry Samora Machel, President of Mozambique. She married after her husband died.

3. Nelson Mandela was passionate about boxing.

4. Nelson was seen in Spike Lee's 1992 film Malcolm X. He was a Cameo appearance as a teacher.

5. After studying law at the University of Witwatersrand, he founded the first Black legal office in Johannesburg in 1952.

1. “Education is the most powerful weapon which you can use to change the world”

2.“What counts in life is not the mere fact that we have lived. It is what difference we have made to the lives of others that will determine the significance of the life we lead.”

3.“I am fundamentally an optimist. Part of being optimistic is keeping one’s head pointed toward the sun, one’s feet moving forward. There were many dark moments when my faith in humanity was sorely tested, but I would not and could not give myself up to despair. That way lays defeat and death.”

4.“Everyone can rise above their circumstances and achieve success if they are dedicated to and passionate about what they do.”

5.“It always seems impossible, until it is done.”

6.“Lead from the back – and let others believe they are in front.”

7."I have always believed exercise is a key not only to physical health but to peace of mind."