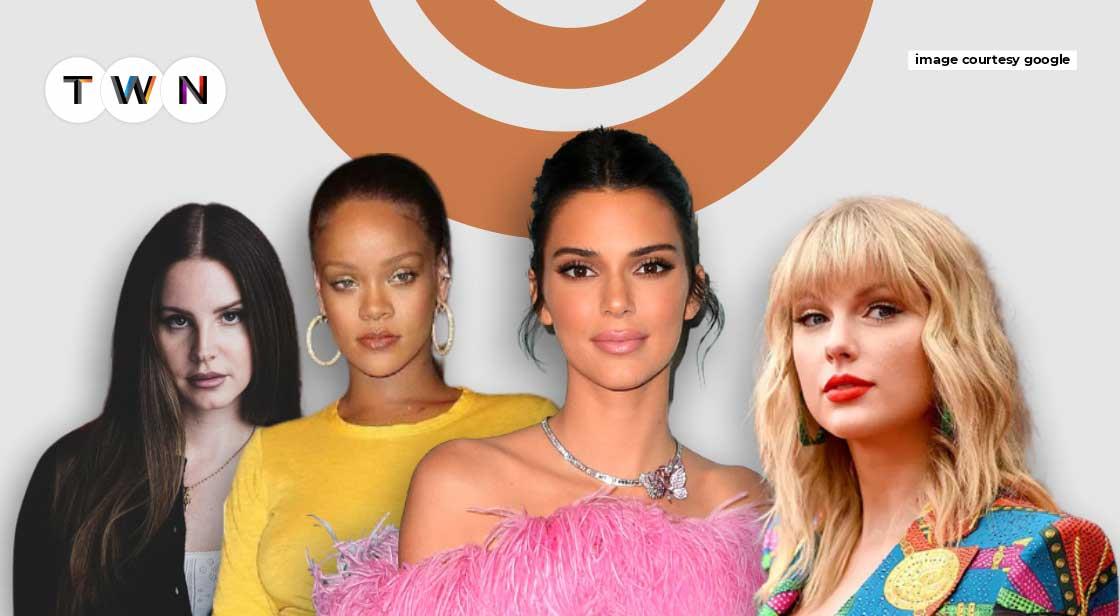 Can you name only ten of the most popular women in the world, despite the fact that women are reaching everywhere, doing well in practically every sector, and giving males a tougher time? We understand that most of you will find it challenging. So, here is the list of the 50 most popular women.

The internet and social media platforms have grown in popularity over the last decade. In response to this trend, we've compiled a list of the world's 50 most popular women on the internet, and trust me, when you will see the 7th most popular woman, you will flip. #TWN

Do you want to know who the world's most popular women are? Women, like men, are working their way to the top in every industry. We've put up a list of the 50 most popular women from around the world, along with a look into their professional lives, to help you become more aware of them. Taking a look at their life journey will undoubtedly be instructive and may help to put things into perspective.

50 most popular women's names and rankings

Her real name is Oprah Gail Winfrey, and she was born in Kosciusko, Mississippi, on January 29, 1954. She takes the top rank, and she deserves it because she was born to a teenage mother who was living in hardship.

Despite hailing from a financially impoverished household, she has grown into a strong and powerful lady who not only hosts but also produces television shows. She's also an actress, an author, and a philanthropist.

Cher was born in El Centro, California, on May 20, 1946. She is an American actress, singer, and television personality who is dubbed the "Goddess of Pop" by the media.

She has a sizable fan base, having worked in the entertainment sector for almost six decades. Furthermore, there was never a dull time in her work because she was continually experimenting with her appearance, which set her apart from her peers.

Lana's full name is Elizabeth Woolridge Grant, and she was born in New York City on June 21, 1985. She is best renowned for her lyrics, but she is also a phenomenal performer and has produced a few albums.

After putting a lot of effort into singing and publishing some of her songs, she was recognized in 2011 when her debut single, Video Games, went viral. Her current net worth is estimated to be over $30 million.

Robyn Rihanna Fenty is her real name, which few people are aware of. She was born in Saint Michael, Barbados, on February 20, 1988. On Instagram, she has a massive fan base. Furthermore, the singer began her career in 2005 and rose to prominence with her first two studio albums, Music of the Sun and A Girl Like Me, both released in 2005. She has never looked back since then and now has a net worth of $300 million and over 92.4 million followers.

Kendall Nicole Jenner was born in Los Angeles, California, on November 3, 1995. Without a Jenner on the list, it was clearly incomplete. They're well-known, and Kendall is one of them.

She is also a model with a large social media following, with over 153 million Instagram followers. She became famous after appearing on the reality show Keeping Up with the Kardashians.

She is also ranked 16th among top-earning models in Forbes magazines. Her current Net Worth is estimated to be 45 million dollars.

Stefani Joanne Angelina Germanotta, Gaga's true name, was born on March 28, 1986, in New York City, United States. Her skill was recognized in 2008 when she released her debut studio album, The Fame. Furthermore, while the singer had a successful profession, her personal life was a disaster, as she had been at war with her family since she was a teenager.

However, she and her mother eventually worked out their differences, and they now have a fantastic relationship. She now has an estimated net worth of $320 million.

We're not sure why Justin Bieber made the list of the world's 50 most popular women. In 2013, a talent manager noticed the young Canadian artist and songwriter because of his appearance. The singer quickly established himself as a teen idol, topping the charts for the first time in 47 years as the youngest solo male act.

Britney Jean Spears was born in McComb, Mississippi, on December 2, 1981. She is a singer, dancer, and songwriter in addition to being an actress. She has worked in the entertainment industry since 1992, with the majority of her work receiving critical acclaim.

However, her breakthrough came in 2008 with the release of the album Circus. Because of her celebrity, she has always been a target for the media and has been embroiled in a number of incidents. Her net worth is currently believed to be over $60 million.

Selena Marie Gomez was born in Grand Prairie, Texas, on July 22, 1992. She is a well-known performer who specializes in singing, acting, and composing. She became quite popular as a result of her role in the Disney sitcom Wizards of Waverly Place, in which she played a prominent role.

The show has also received Emmy nominations. She did, however, appear on Hannah Montana as one of Miley's contemporaries prior to the show. She has worked in the music industry since she was a child and has a close friendship with Taylor Swift.

Adele Laurie Blue Akins was born in London, England on May 5, 1988. She is a singer and songwriter from England. Her debut album, 19, was a hit, including one of the songs, Hometown Glory, written by her when she was only 16 years old.

Her following album, though, was titled 21, and it was even more successful than her first. She was also married to Simon Konecki, although the couple recently divorced in 2019.

Madonna Louise Ciccone was born in Bay City, Michigan, on August 16, 1958. She grew up in Michigan before moving to New York City to pursue her passion for dance; she is now known as the Queen of Pop.

She rose to prominence as a result of her solo album, Madonna. Following that, all of the subsequent albums garnered overwhelming praise from the public, and everyone realized there was no stopping this girl now. Her net worth is currently believed to be $850 million.

Beyoncé Giselle Knowles Carter was born in Huston, Texas, on September 4, 1981. She is a multifaceted artist who excels at singing, acting, songwriting, and directing. Since she was a child, she has been actively engaging in dancing and singing competitions. She has collaborated with notable singers such as Jay-Z and Sean Paul over her singing career.

With over 166 million Instagram followers, she has a strong social media presence. She is also the highest-paid celebrity, with an estimated net worth of $81 million in 2019.

Jennifer Lynn Lopez was born in New York City, New York, on July 24, 1969. She has been in a number of films and has also released singing records. She is the most powerful Latin actress, and she was the first Latin actress to charge $1 million for a film.

However, few people are aware that she excelled in sports throughout her undergraduate years. The gorgeous actress and singer are currently worth over $400 million.

Katheryn Elizabeth Hudson was born in Santa Barbara, California, on October 25, 1984. Despite the fact that she has been in the industry since 2000, her album One of the Boys propelled her to fame in 2008.

Her three succeeding albums were favorably welcomed by the public, and she became well-known all over the world. Her Instagram following is over 113 million, and her net worth is reported to be above $330 million.

Shakira Isabel Mebarak Ripoll is her true name. She was born in Barranquilla, Colombia, on February 2, 1977. She is mostly a singer and composer, but she is also a phenomenal dancer. She has been dubbed the "Queen of Latin Music" by the media.

She made her first appearance at the age of thirteen. She also found success after the failures of two of her albums, which were released in 1991 and 1993, respectively. She has worked in a variety of languages, including English and Spanish.

Nicki Minaj's birth name is Onika Tanya Maraj-Petty, and she was born in Saint James, Trinidad and Tobago, on December 8, 1982. Her debut album, Pink Friday, debuted at number one on the Billboard 200 in the United States in 2010.

Her second album also charted in the top five of the Billboard Hot 100 singles. She never looked back after her back-to-back victories and continued ascending the mountains, and her net worth is now estimated to be at $ 80 million.

Miley Ray Cyrus was born in Franklin, Tennessee, on November 23, 1992. Few people know that her parents named her Miley after her childhood nickname Smiley because she used to smile a lot.

It's impossible to talk about popularity without mentioning the Kardashian family. Kim was born in Los Angeles, California, on October 21, 1980. She is the only person on this list with more than 200 million Instagram followers.

She also owns her own clothing line and founded KKW Fragrance and KKW Beauty. She has also acted in some fantastic films in addition to her company. Her current net worth is estimated to be around $780 million.

Angelina Jolie Voight was born in Los Angeles, California, on June 4, 1975. She is well-liked by people all around the world, and her work is frequently praised by the media. In addition, she made her professional debut in 1993 with the film Cyborg 2.

She also married Brad Pitt in 2014. However, the couple eventually divorced. Her personal life is not particularly fulfilling, but she has accomplished great things professionally. Her estimated net worth is $100 million.

On February 17, 1981, Paris Whitney Hilton was born. Paris comes from an affluent family in New York City since she is the granddaughter of Conrad Hilton, the founder of Hilton Hotels.

She began her career as a model in New York and became well-known after the release of her album, Paris, in 2006. Her personal life, on the other hand, has always been so sensational that Forbes named her the most overexposed celebrity in 2012.

So those are some of the most powerful women in our world. You've probably noticed that most of the ladies on the list are actresses, singers, philanthropists, or models, and some are even multitalented.

However, putting a popularity ranking on them is difficult because some have a large social media following while others have a large real-life following. Nonetheless, we did our best to identify a middle ground and give you the list.