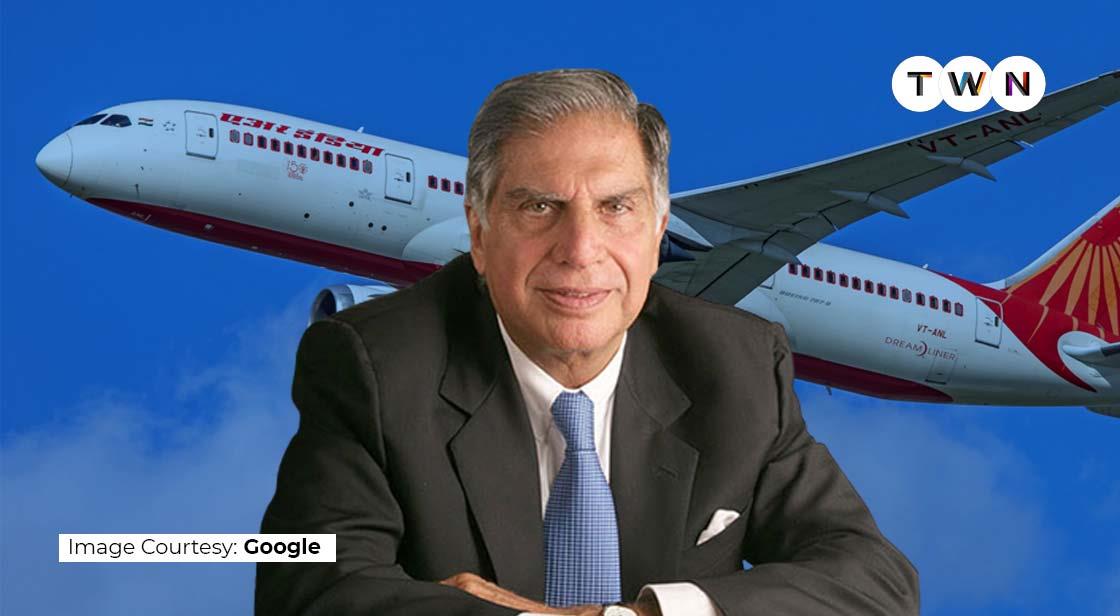 "The Maharaja Returns Home!" This statement is underlined with Ecstasy and Pride! Air India is back to where it belonged, to the TATA Sons! On 27 January, the government of India formally handed over its first commercial airlines to the TATA Sons, the oldest and trusted business conglomerates of India. As a result, after 69 years of painful separation, the TATA Sons is super delighted to welcome its prodigal back under its wings. No wonder, there is joy and celebration all around. So in this happy moment, let us fly down the memory lane with our very own Maharaja! #TWN

What is Air India without the “Maharaja?" Even he is back, complete in his grandeur with the red Turban and typical outsized mustache! So fasten your seatbelts, ladies, and gentlemen. We are ready to take off! A Tata Group Success wroth exploring!

The Contribution of JRD TATA

Established in 1932, Air India is the brainchild of the visionary and legendary businessman JRD Tata. The Tata Sons have been instrumental in laying a strong foundation for the Indian economy. It has a big contribution to the manifold development of India. JRD Tata (Jehangir Ratanji Dadabhoy Tata) was a legendary industrialist. He built on the hard work of Jamsetji Tata and converted the company into a giant. His contribution was responsible for the growth of India in the field of Agriculture, Industry, Aviation, and, Society. His vision and smart planning enabled India to become a global power!

JRD Tata was a licensed pilot and, his fascination for flying inspired him to visualize a commercial airline for India. He chalked out a plan and, very soon, it turned into a reality. India got its first commercial airline.

Airmail Carrier: In April 1932, Tata got a contract to carry airmails for Imperial Airways (British Commercial Airline). So it flew from Karachi to Bombay (Mumbai) carrying the mail.

Tata Airlines:  In 1938, it was named Tata Air Services, and later it was rechristened as Tata Airlines.

First Passenger Flight - A six-seater airplane took off from Bombay to Trivandrum. It was a monoplane built by Miles Aircraft Ltd.

TATA Airlines started to scale high in the skies of profit. The rich and famous citizens of India instantly relished the idea of commercial flight. They began to use chartered flights to fly to foreign lands. It was naturally great news for the airlines, and in just five years, the profit piled up to Rs.6,00,000/-. It was no looking back for this beloved venture of JRD Tata.

Namaste, did you meet him? The lovable gentleman clad in red attire, striped turban, and out-sized mustache? It is back as the iconic symbol of Air India! He has been the symbol since its beginning when one of the first employees, Bobby Kooka, designed this unique logo of Air India! mail Nobody knew that its popularity would be such that it would become an identity for the company.

The Maharaja symbolizes high living and graciousness. The figure that was created merely for an inflight memo pad soon became the Air India mascot for promotional messages. It succeeded in captivating the world with its mischievous personality. He can be the cheerful naughty Maharaja of Air India, a sumo wrestler in Tokyo, a lover boy in Paris, or a Red Indian! He can take any garb and play the role to finesse. His antics, puns, and expressions have made him lovable all over the world! Winning many rewards for his distinct style and universal appeal, he is like a friend to every Indian Traveler. Wherever you see his figure you instantly recognize him – “Air India!” Air India is he, happily yours!

From Tata Airlines to Air India!

Once World War II was over, the British Administration restored the commercial services in India. And Tata Airlines became a public limited company under the new name "Air-India." However, after India attained Independence in 1947, the Government of India acquired 49% shares in Air India.

First International Flight: On 8th June 1948, a flight named ‘Malabar Princess’ took off from Bombay to London Heathrow Airport, registering it as the First-ever International Air-India Flight in the annals of history.

Nationalization and the Formation of Air India

Air India began to fly in the International skies with competency. It was steadily rising in trust and efficiency all around the world. But while India was celebrating its Independence, the fear of nationalization was looming large on Air India. And the fear soon turned into a reality when in 1953, the Government of India passed the Air Corporations Act to give way to the nationalization of the carrier. Thus, the hyphen in Air India was removed, and Air India came into formation! Though, JRD Tata remained the Chairperson of Air India. Air India continued to spread its wings. Air India could now carry passengers to Kenya, Singapore, Hong Kong, Rome, Paris, and Tokyo.

Air India has to suffer some tremors also. Due to an unfortunate air crash, 213 people lost their lives and, JRD Tata had to resign as the Chairman. However, two years later, he joined again but just as a member! But the damage was done! The business suffered immense losses during his absence! In 1986, Ratan Tata stepped in as the chairperson of Air India. But the political disturbance prevented him from developing the sector of civil aviation. During the decade of the 90s, their profits decreased and, they started accumulating debts. By 2012, the debts increased to approximately 63,000 Crores. This downslide of Air India was extremely heartbreaking!

Privatization: A Ray of Hope!

The continuous decline of Air India made the Indian Government extremely worried about the debts that were increasing with each passing year. It decided that privatization was the only way to get rid of the growing debts. After many bids to privatize it, it decided to sell off 100% shares of Air India.

Air India Back under the Wings of Tata!

Air India landed to a beautiful morn of love when Ratan TATA brought the beloved company of his predecessor JRD Tata, back in the loving arms of Tata Sons. He paid a whopping 18,000 Crores for the deal!

Ready for Take-off into New Skies of Dreams!

Tata Sons have chalked out a 100-day plan to bring the ailing Air India back on track. They have decided to revamp it in all major departments and enhance your flying experience!

Debts Cleared: The Government has taken care of some part of the debt, while the Tata Sons have taken the help of the State Bank of India to clear the remaining debt.

Focus on Performance: The 100-day plan will concentrate on streamlining the flight operations. The focus would be on enhancing the Punctuality of the flight and providing complete Customer Satisfaction.

Dress Code: The dress code for the Cabin crew would be a traditional Indian Saree. As in the words of an Air India official, "The Cabin crew will be attired in mustard yellow saris with a little orange print on it. We have retained the Saree because it is a part of Indian tradition and culture." According to the official, 50% of the Crew members would also wear Indowestern Trousers with a small Kurti and scarf. Many times passengers have complained about the rudeness of the staff. So, Courteous behavior from the crew members and ground staff is on top priority as per the new plan. Another problem point is the physical fitness of the staff, which would be in control in the new era! This way, it is ready to traverse the path of excellence and efficiency and scale the skies of success!

Mentioning some recent updates on the Tata Air India, the chairman of Tata Sons, N Chandrasekaran is now officially the new Air India Chief. This happened after Ilker Ayci declined the offer. In addition to that, Air India is ready to resume their international flights too.

Related: 5 Business Lessons from Ratan Tata You Can Apply to Your Own Company

So, after staying away from Tata Sons for 69 years, Air India is back as a part of the Tata Group! It has acquired a familiar runway now! And we are sure it will thrive in this era of new beginnings. The Maharaja returns home, and we hope that he finds his lost glory very soon! Here’s to their wonderful new journey together, and we hope this bond continues forever!