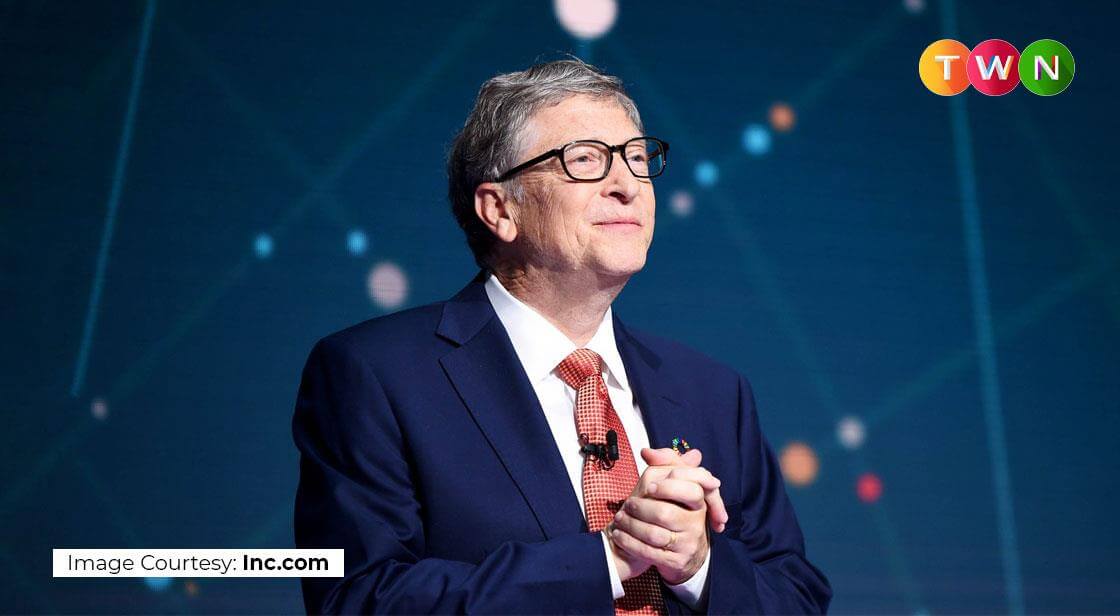 Bill Gates is an American software engineer and business entrepreneur who, with his friend Paul Allen, co-founded Microsoft, an American technology company specializing in computer software, in 1975. His success isn't a fluke. It is the result of years of struggle and failure. We’ll walk you through the inspiring and motivational success story of Bill Gates, besides his journey with Microsoft and a supporting family of his wife and children. #TWN

Bill Gates and his Success Story! It is a topic worth reading, and that is why we have written an article on it!

Bill Gates is a co-founder of Microsoft, the world's largest software company, as well as a sponsor and programmer. He established the world's largest software corporation, making him the world's second-richest man. With a net worth of more than $34.6 billion and philanthropic giving totaling more than $28 billion, Bill and Melinda Gates were America's second most generous philanthropists in 2007. Don't you want to learn about this amazing entrepreneur's extraordinary journey to success? Alright, we'll walk you through the success story of Bill Gates - The Business Giant!

A Peak into Bill Gates Success Story: Journey With Microsoft

Bill's school friend Allen discovered an article on MITS's first mass-market Altair microcomputer in 1975. However, the machine lacked software. On the other side, Bill and Allen saw this as a chance to start their own software company. When Bill Gates approached MITS, he had no choice but to lie and pretend that he and a buddy had already created the BASIC programming language for the company's idea. The company was so impressed by the concept that they were obliged to develop the Altair software from the ground up in a month and a half, using only school computers. When the machine adopted Allen and Gates' design, MITS forged a relationship with them.

Microsoft was founded two months later by Allen and Gates. Gates' mother, who had previously been on the board of a banking and telecoms company, became the manager since the young people couldn't afford to hire a large workforce. Success did not come easily, since the first five clients went bankrupt. In 1980, IBM made an order with Microsoft for the first personal computer operating system. Gates first opposed since he didn't have his own system, but he was forced to accept because IBM couldn't agree with anyone else. Bill paid $50,000 for Tim Paterson's Q-DOS operating system, then adapted it for IBM and sold it to the company under the name MS-DOS for the same price. Microsoft now owned the operating system's rights and could sell it to other computer companies. Microsoft has continued to grow since then. The number of software and hardware products has been growing, from Windows OS to Microsoft Office Suites, Office 365. Since 1975, Microsoft has controlled the software market, and most firms use Windows software. They've always kept up with change, which is why they're still the most successful software company in the world.

Bill Gates demonstrates the importance of determination, hard effort, cooperation, practice, and decision-making in achieving success. Don't be afraid to get back up and try again, whether you succeed or fail. Due to a lack of funds, Gates was formerly unable to recruit employees, but now has a net worth of $90.6 billion and leads a successful life as the world's second-richest man.

Related: A Business Strategy according to Jeff Bezos

The Thirst to do Something

Bill Gates has been fascinated by technology and programming since he was in the eighth school. Bill Gates' school's Mothers Club acquired a Teletype Model 33, which he had access to years before other schools received computers. Bill Gates' enthusiasm for computers fueled his desire to learn more about their software and hardware, and he offered to help his school identify computer problems.

Later, students, including Bill Gates, breached the security protocols on their school's computer, resulting in a prohibition on using the system. Following the prohibition, Bill Gates made an offer to CCC, joined by three of his pals, to uncover defects in the program in exchange for greater time on the computer, which CCC accepted. Bill Gates and his associates collaborated with CCC to aid in the detection of faults. They were able to perfect programming thanks to their knowledge of computer languages. Bill Gates honed his abilities via consistent practice, a lesson that anybody seeking success may learn from.

At the age of 17, Bill Gates had to determine whether or not he wanted to pursue his passion for programming. He founded Traf-O-Data, a company that specialised in traffic-counting systems and delivering data for traffic engineers, with his close friend and business partner Paul Allen. MITS was asked by Bill Gates and Paul Allen in 1975 to build a minicomputer emulator that would implement the BASIC programming language. Microsoft, their firm, was started at that time. Starting a new firm was a big risk, but Gates and Allen were aided by good timing and a business strategy.

Never Give Up And Work Hard

Microsoft's sales were unpredictable in 1980, and the firm was on a low budget and couldn't afford to hire a sales manager. But Gates didn’t give up. Bill Gates took a break from his Harvard studies at the time to focus on Microsoft. They opted to leave MITS and concentrate only on Microsoft, working to improve its products and services. When Microsoft licensed an operating system called MS-DOS to be used on IBM's personal computers, a computing behemoth at the time, it was a watershed moment for the company. As a result, Microsoft became the world's largest supplier of operating systems.

Bill Gates never worked alone; he co-founded Microsoft with his buddy Paul Allen and later led a team of people. He read every code sold at the start of Microsoft. Bill Gates was passionate about Microsoft, and he expected his staff to be as well. Working in a group rather than alone makes it easier to accomplish success.

It wasn't an easy route, and Microsoft made a concerted effort to expand its product offerings as much as possible. Bill Gates was a success, but he found himself at the cutting edge of consumer software development and information technology, where he faced stiff competition from a slew of businesses eager to cash in on a booming market. Even though the company is experiencing difficulties, and many industry experts have previously argued that Microsoft, and by extension, Bill Gates, missed the broader transition to mobile technology, the company, and by extension, Bill Gates, has remained extremely successful.

Microsoft continues to be the leader in the software market, starting with his first idea. Bill Gates has managed to keep up with the pace and helped Microsoft remain the #1 software company worldwide.

Since a few years, Gates has not been involved in the day-to-day operations of Microsoft. The majority of his time has been spent on community projects and philanthropy. Many foundations he co-founded were founded by him, including The Giving Pledge. This foundation encourages wealthy people to give their wealth to philanthropic causes. Bill Gates pledged more than 80 percent of his wealth to charity upon his death.

Although he has given to many organizations over the years Mr. Gate's crowning charitable achievement was the creation of the Bill and Melinda Gates Foundation (BMGF), which utilizes its vast capital resources to address the most urgent issues of the world in a unique way. Instead of focusing on the problems that people face in their own regions, they focus on those that can be addressed globally.

The team then works with partners who can assist in bringing about that change worldwide, and scaling up those solutions at a local level. Bill Gates has given more than 30,000,000 dollars to his foundation in grants and has promised that the foundation will have more 365Billion in the future with their billionaire "giving pledge".

According to the foundation's website, their grant-making approach is simple. It emphasizes collaboration and innovation as well as risk-taking and, most importantly results. We don't have enough information to list all the charities that the foundation supports, so instead, we will focus on the five major Divisions of the Bill and Melinda Gates Foundation and what they support in order to give you a glimpse of the incredible work they do.

Divisions Of The Bill And Melinda Gates Foundation

Bill Gates is most closely associated with the fight against malaria. While this effort is being carried out by many different research and non-profit organizations, it is all managed by the BMGF division. The Global Health Division, in its simplest form aims to use science and technology to save people's lives in developing nations.

This section of the BMGF focuses on issues that disproportionately impact the developing world and prevent them from living their best lives. This priority is important because inequity in the distribution of capital and opportunities between countries is one of the main factors that prevents the world from solving the problems that affect all of us.

The BMGF is a very simple organization when it comes to poverty. The BMGF believes that people are poor because the markets don't work. To combat this, they promote innovative products, policies, and programs that break down economic barriers, help people get out of poverty, and provide sustainable, inclusive growth that benefits all.

Although the BMGF has a global focus, Bill isn't forgetting his roots or the amazing gift of American education. As such, he has dedicated an entire division to promoting educational opportunities in the United States.

This division's primary goal is to ensure that every student graduates high school ready for college and has the opportunity to obtain a postsecondary degree of labor-market value. The foundation is a catalyst, supporting the development of innovative education solutions that cannot be produced by institutions alone. This can also help to trigger change on a larger scale.

Although the BMGF's coffers are large, they aren’t entirely empty. Bill Gates has known for many years that his monetary resources are not sufficient to support all of his causes. But that's where the division of the foundation comes into play.

The Global Policy and Advocacy Division promotes public policies that support their work, builds strategic alliances with governments and the public and private sectors, and raises public awareness about urgent global issues. This section of the foundation consists of teams that are dedicated to advocacy, policy analysis, and communications. It also strengthens philanthropic partnerships in the United States as well as the charitable sector.