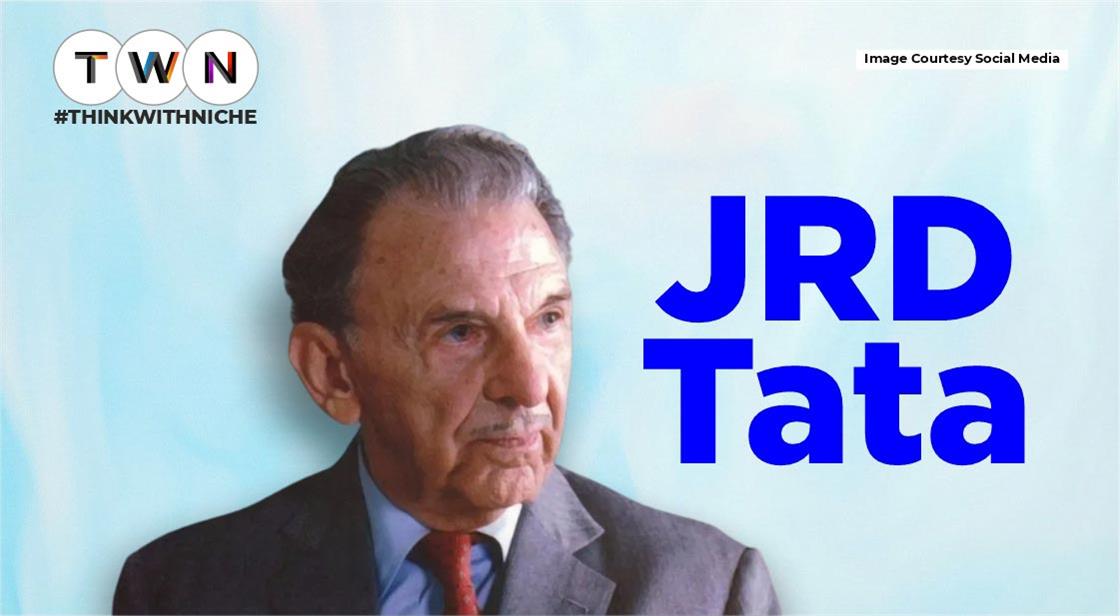 Jehangir Ratanji Dadabhoy Tata, a great businessman and industrial magnate who is revered as the Father Of Indian Aviation, is an example to everyone. He founded various enterprises that are now part of the Tata Group and successfully guided it to its current position. He has played an important role in the development of independent India along with the Tata group. He was born in France on July 29, 1904, exactly 118 years ago. Today is the 118th birth anniversary of veteran industrialist JRD Tata, the longest-serving leader of the Tata group. JRD Tata has achieved many big achievements in his life. He is always remembered for his great achievements and will continue to be remembered. JRD Tata was Tata Sons' youngest chairman. At the young age of 34, he was appointed to serve as the chairman of Tata Sons. His contribution is not limited to giving India its first airline but also to the steel sector. After the independence of the country, Pandit Jawaharlal Nehru's government nationalized Tata Airlines and recognized it as Air India, then JRD TATA was made its chairman. JRD Tata created the Tata Institute of Social Sciences, Tata Memorial Cancer Research Center and Hospital, Institute of Fundamental Research, National Center for Performing Arts, National Institute of Advanced Studies, and various trusts. Whenever the story of India's economic development will be written, the name of Bharat Ratna JRD Tata-JRD Tata will be written in golden letters. Let us know in detail about JRD Tata, who gave India the First Airline.

When we discuss the individuals who helped set up the foundation for modern industry in India, Jehangir Ratanji Dadabhai Tata, a well-known industrialist from the Tata family, is the first person who comes to mind. He has made his mark in many sectors. Has contributed a lot to the development of steel, engineering, hotels, and automobiles in the country. Apart from this, the credit for laying the Foundation Of Civil Aviation in the country also goes to JRD Tata. JRD Tata had decided that he would make it his career after sitting on the plane for the first time at the age of 15. At the age of 24, he was the first person in India to get a commercial pilot's license. He founded the first Airline in the country, Tata Airlines, which later transformed into Air India. Let us know in detail about Jahangir Ratanji Dadabhai Tata.

JRD Tata was born in France on July 29, 1904. His father RD Tata was a business partner and relative of Tata Group founder Jamsetji Tata. JRD Tata's mother Susan was a citizen of France. He was the second of four children of his parents. Talking about his studies, apart from France, he did his studies in Japan and England. Today is the 118th birth anniversary of India's famous industrialist Jahangir Ratanji Dadabhai Tata. Jehangir Ratanji Dadabhai Tata was the founder of several companies of the Tata group. He led the Tata group for nearly five decades. Ratanji Dadabhai Tata is also very much remembered for his philanthropic work. Very few people know that Tata was also a part of the French Army. Actually, his mother was from France. His childhood also passed there, so he was given army training for a year and he used to work in the army office.

Parliament Was Adjourned To Mourn His Death

There have been very few people on whose death the Parliament has been adjourned. On the death of JRD Tata, both the houses of Parliament were adjourned.

The love of Tatas for flying is well known. This association was not only with JRD Tata, who made India the first airline, after him Ratan Tata, who took over the reins of Tata Sons, is also fond of flying. The association of Tatas with aircraft and flight dates back to the time of JRD Tata.

JRD Tata is known as the country's first commercial pilot. When he was 15 years old, he enjoyed flying on a plane in France and after getting on the plane for the first time at the age of 15, he decided that he would make it his career. On February 10, 1929, JRD became the first Indian to pass the pilot's examination. Then at the age of 24, he was the first person in India to get a commercial pilot's license. In 1930, he traveled alone from India to England to participate in the Aga Khan Competition.

In fact, in the year 1930, there was a proposal to start an airmail service at Tata's headquarters (Bombay House), which was going to connect Bombay, Ahmedabad, and Karachi. Dorabji Tata, then chairman of the Tata group, convinced JRD's friend and Tata colleague John Peterson to start this service. JRD Tata started the company along with Air Force pilot Neville Vincent. This company was started not for passenger flights but for carrying mail. The first postal service flight was from Karachi to Madras and JRD Tata himself became the pilot.

JRD Tata began his initial business training at Tata's headquarters in Mumbai under the guidance of JCK Peterson (then Director-in-Charge, Tata Steel). After his initial training in the steel business, he moved to Jamshedpur in 1926. There he studied the operations of the Tata Iron and Steel Company. During his stay in Jamshedpur, he was informed of the death of his father RD Tata and JRD returned to Mumbai. JRD was made a director of Tata Sons Limited after the death of his father. He was 26 years old at the time of joining the post of director.

JRD Tata, director of Tata Sons, was made the director of Tata Iron and Steel Company in 1933. After the death of Sir NB Saklatwala, the then Chairman of Tata Steel in 1938, JRD was appointed as the Chairman of Tata Steel. JRD served as the chairman of Tata Steel for 46 consecutive years. The great industrialist who laid the industrial foundation of modern India was JRD Tata. When JRD Tata took over the responsibility of the Tata group, there were only 14 companies. His hard work and visionary policies have led to the formation of more than 95 companies in the Tata group after 5 decades. After becoming the chairman of Tata Sons, he took several important steps to take the group forward. When it comes to laying the foundation of modern industry in India, the name of the famous industrialist of the Tata family, Jehangir Ratanji Dadabhai Tata (JRD Tata), first comes to mind. Few people would know that Jehangir Ratanji Dadabhai Tata was the relative of Mohd Ali Jinnah. Actually, Tata's sister was married to British Baronet Dinshaw Maneckji Petit. His sister's sister-in-law Ratanbai Petit married Muhammad Ali Jinnah. Thus Tata became a relative of Jinnah.

Growth And Achievements Of Tata Group

JRD is called the Father of Civil Aviation in India. JRD Tata became the chairman of Tata Sons on 26 July 1938 at the age of 34. At that time, Tata Sons had only 15 companies, including Tata Steel  TISCO. He laid the foundation of Tata Motors (Telco) in 1945. When the car of Tata Motors was ready, the transport service in the country was much better. Except for Tata Steel, most of the Tata group companies established in Jamshedpur were established during his tenure. Under his leadership, the assets of the Tata group increased from 62 crores to 10 thousand crores. He was also the first person to buy a foreign car in gulam bharat. Along with the car, the driver was also called from abroad for him.

Related: The success story behind Theobroma you must know for a business inspiration tank

He played an important role in the development of many industries on the strength of his hard work. JRD Tata created the Tata Institute of Social Sciences, Tata Memorial Cancer Research Center and Hospital, Institute of Fundamental Research, National Center for Performing Arts and National Institute of Advanced Studies, and various trusts. In 1992, the United Nations honored him with the United Nations Population Award for his significant contribution to population control in India. In view of his contribution to the country, he was honored with Padma Vibhushan and Bharat Ratna. In 1992, he was awarded the Bharat Ratna, the country's highest civilian honor. In 1954, France awarded JRD Tata its highest civilian award 'Legion of the Honour'. In 1955 he was awarded the Padma Vibhushan. He died on 29 November 1993 in Geneva.JRD served as the Sir Dorabji Tata Trust's trustee started in 1932 and managed the institution for more than 50 years.