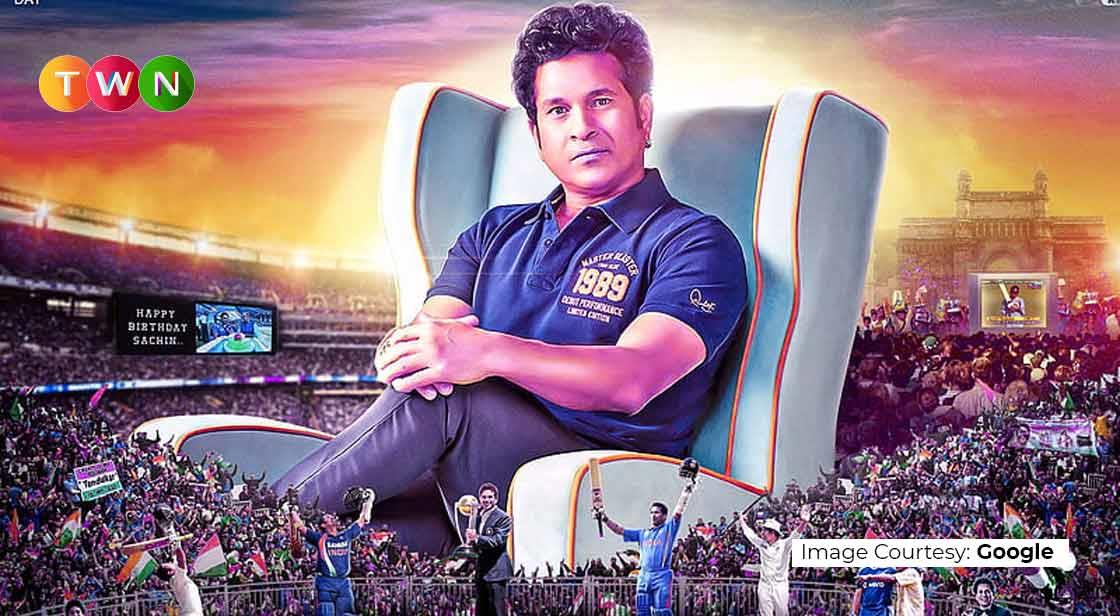 Sachin Tendulkar is the greatest batsman of all time, the most prolific run maker of all time, and possibly the greatest cricket icon of all time. His batting style was based on the most fundamental principles: perfect balance, the economy of movement, stroke precision, and anticipation, an ethereal trait only geniuses possess, and like the famous Indian comedian Mr. Zakir Khan said, “Sachin sabka baap hai” (Sachin is the best). Sachin will always be admired by Indian cricket fans. He was the reason why every Indian child wanted a bat of MRF in their childhood, he was the reason why most of us started watching cricket, and he was the reason why every parent wanted to name his kid Sachin. On the occasion of his birthday, let’s take a look at his legendary career and why he was called the “Master Blaster.” So let’s start the blog. #TWN

24th April 1973, a novelist was celebrating the birth of his fourth child, but little did he know that this child was born to create history and will go on to become the “God Of Cricket.” Sachin Tendulkar was the youngest child of the family and hence was the most pampered one his elder brother and also his current manager “Ajit Tendulkar” first noticed his talent just after he held the bat for the first time.

After teaching Sachin some basics of cricket, Ajit took him to the most reputed coach of Mumbai “ Ramakant Achrekar,” who rejected him in the first trial but later granted him admission in his coaching after a lot of pleading from his elder brother.

Sachin till date calls Achrekar sir as his Guru. In the beginning, Sachin never wanted to be a batsman, he wanted to be a fast-bowler instead, but his coach told him to focus on batting as he spotted a brilliant batsman in Sachin.

Achrekar Sir had some unique ways of coaching Sachin. He used to keep a coin in the middle of the pitch and asked his best bowlers to ball Sachin. Whoever was able to take the wicket of Sachin got the coin, and if Sachin left the field not-out, he used to get that coin.

Sachin got a Vada-Pav (Indian Street Food) as a reward every time he used to perform well in a Local-Match. Apart from his coach, even Sachin had some unique way to practice his game. He used to dip the ball into the water and then asked the bowler to ball him. This way he was able to judge which part of the bat did ball actually hit and what improvements were required to improve his game.

At the age of 16, Sachin debuted in team India for international Cricket. Sachin was the youngest player on the team. In his first match, he scored 0, and the selectors wanted to drop him, but somehow he managed to stay in the playing 11, and after that, it was no looking back for him.

There are many stories about the reactions of the bowlers after they saw this 16-year-old kid playing from the side of Team India; Waseem Akram once called Sachin a kid, which proved to be his worst mistake. Sachin’s small frame but hard-hitting gave him the title of “Little Master.”

Let me tell you another very interesting storing about this legendary cricketer; Waqar Younis’s bouncer broke Sachin’s nose once, and the captain of team India asked Sachin to get retired hurt, but Sachin replied with only two words, “Mai Kheleyga” (I’ll play), and no matter how much the captain convinced him to get retired hurt, he kept on saying these words and captain with no other option left, allowed him to bat.

Sachin ended up hitting 57 runs in that match. He achieved so many things in his career that mentioning everything in just one article will be a straight injustice, but we can discuss some of his greatest achievements.

Sachin Tendulkar has created many unbreakable records; He has 34,357 runs to his name, out of which 15921 runs were created in the Test Matches while 18426 runs were hit by him in the ODI’s, and don't forget Sachin Tendulkar Centuries, he was the one and the only player to hit 100 centuries in total, although this record could have been much higher if he did not fell victim to the nervous ’90s.

If you have enjoyed reading this Blog, TWN recommends you to read our Blog on "Virat – Rohit: Rift or Reverence?" Click on the Image Below!