Indira Gandhi and her contribution for the country 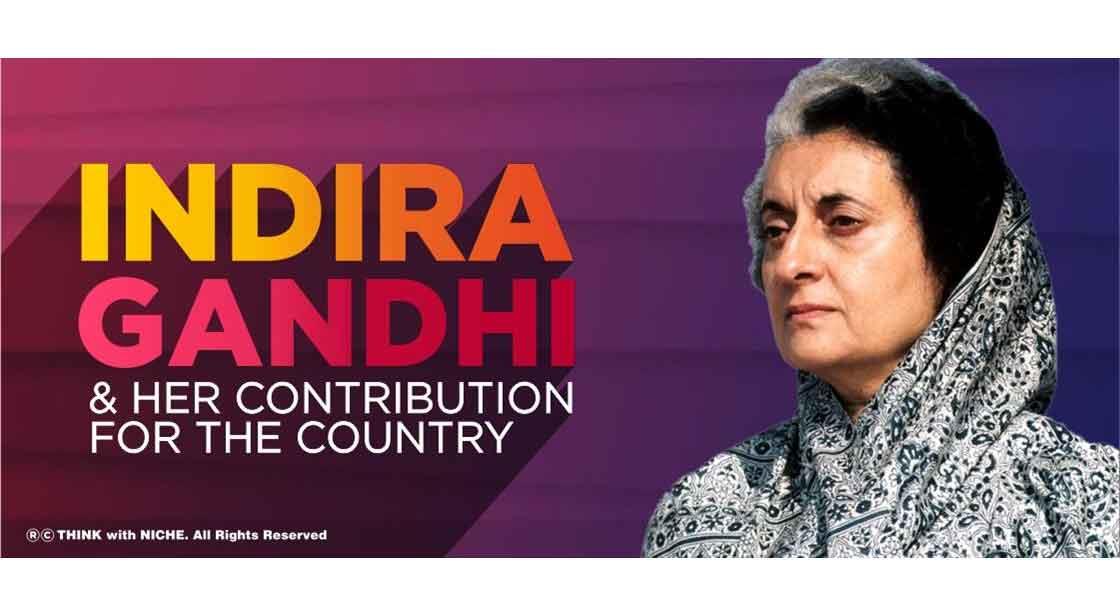 Let’s take insight on how the 1st lady PM of the country reformed policies. The following blog provides you a brief of initiative take in the Indira Gandhi government #ThinkWithNiche

Indira Gandhi, daughter of India’s first Prime Minister, Jawaharlal Nehru, was the 3rd PM, and the first and only female prime minister of India. She was undermined by many, as she was a woman running the cabinet of male ministers but her boldness and strategical decision making made people realise her potential. She had contributed majorly to the development of the country.

1. Bank Nationalisation Ordinance
In a 7 August 1969 speech on All India Radio, Prime Minister Indira Gandhi called for control over the commanding heights of the economy to justify an ordinance that nationalised banks. The ordinance was turned into law by Parliament, under the Banking Companies (Acquisition and Transfer of Undertakings) Act of 1970, deemed to have come into force on 19 July 1969,14 banks were nationalised. Today the number stands at 12 after a spate of mergers instead of 27 in 2017.

2. Abolition of Privy Purse
In consideration of acceding to the Indian union, the Government of India granted to them a ‘privy purse’, which was a specified sum of money that was payable annually to the rulers of such States. The quantum of the payment was determined by the States revenue. Such payments were guaranteed by a provision in the Constitution of India. ‘Privy purse’ was abolished in 1971 in the form of the 26th Amendment to the Constitution of India 1971. Mrs Gandhi argued the case for abolition based on equal rights for all citizens.

3. A second round of land reforms was undertaken by Mrs Gandhi in 1972.
The land reform measures failed to match the legitimate expectations which were first fostered among millions of cultivators during the national movement.  A ceiling was imposed on land holdings and it varied depending on the irrigation status of the land. It was lower for irrigated land (10-18 acres) and 54 acres for unirrigated land. Excess land was to redistributed to landless agricultural workers esp. SC/ST. By March 1985 nearly 7.2 million acres of surplus land was redistributed to about 3.3 million beneficiaries.

4. Green  Revolution
In the 1960’s when IG took charge Indian economy was in shambles- two wars- 1962 and 1965 followed by two successive monsoon failures 1965-66 led to a 20% fall in agricultural production. Famine conditions prevailed with severe drought in Bihar. Foreign exchange was at an all-time low. India was out with a begging bowl and was forced to accept food grains from the USA as aid. To add to all this genocide in East Pakistan- some 10 million refugees had fled to India. oil shock of 1973 when oil prices again doubled and the disastrous harvest of 1999-70 caused by the worst drought since independence.