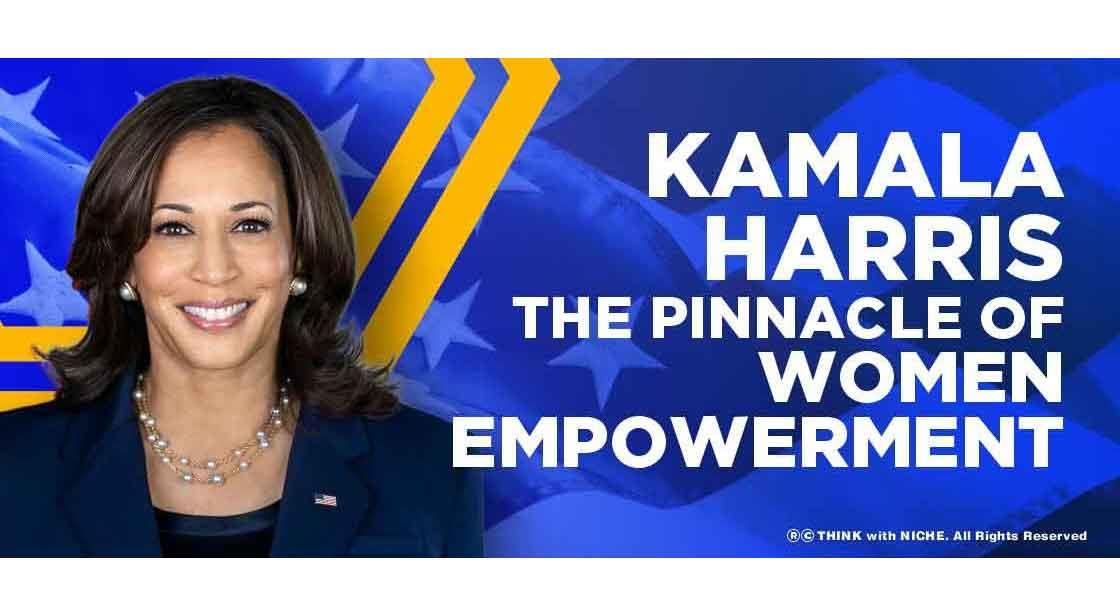 Today women are waving the flag of their victory in every field. On the strength of their intelligence, patience, and courage, women are achieving every position, which is further enhancing their identity. March 8th, i.e., International Women's Day, is celebrated as a celebration of women all over the world. This day is also relevant to recognize and honor the achievements of women. Today we are reaching you the story of one such woman who achieved great success on the strength of her courage, dedication, and hard work, and today every woman is an inspiration.
Who does not know Indian-American Vice President Kamala Harris today? Kamala Harris is an inspiration for millions of people. She has set many examples. #TWN

Kamala Harris, America's first black and first South Asian Vice President, has inscribed her name in golden letters in the pages of history by holding the post of Vice President. She is also the first woman of Indian descent to become the District Attorney of San Francisco. Besides, she is an unprecedented example of women's empowerment. Today we will tell you some interesting things about Kamala Harris, reading which you will definitely awaken the feeling of fulfilling your dreams.

Indian-American Vice President Kamala Harris is also known as 'Female Obama.' She was born on 20 October 1964 in Oakland, California. The story of her parents' meeting is also very famous! Her mother, Shyamala Gopalan, reached UC Berkeley from Tamil Nadu, India, in 1960. At the same time, her father, Donald Jasper Harris, had come to UC Berkeley from British Jamaica to pursue his graduation in economics. Thus, her parents met. A sad moment came in her life when her parents got divorced when she was just seven years old. After the divorce of the parents, Kamala Harris and her sister Maya were raised by their mother, Shyamala Gopalan, alone. During the upbringing of Kamala and Maya, their mother kept both the daughters connected to her background. Kamala wrote in her autobiography 'The Truths We Hold' that her mother knew that she was raising two black daughters and that she would always be seen as black, but she refused to accept her daughters. Shyamala and her two daughters came to be known as 'Shyamala and the Girls'.

Kamala Harris wrote in her autobiography, "My mother understood very well that she was raising two Black daughters," and yet she always instilled in us a sense of self-confidence. Kamala Harris visited India at a young age, and since then, she was very much influenced by her grandfather Pinganadu Venkataraman Gopalan, who was a big government official in India at that time. He also took part in the Indian Independence Movement.

Kamala started growing up, and with that, her journey of success also started moving forward. Kamala studied law at the University of California after studying at Harvard University, followed by Harris as Assistant District Attorney in 1990 at the Alameda County Prosecutor's Office in Oakland (Alameda County) District Attorney's Office), where she worked on prevention of sexual offenses.

In 1994, Kamala Harris came in contact with Willie Brown, considered a powerhouse in California politics, and from there, the two got to know well. Willie Brown was a member of the United States Senate and was 30 years older than Harris. Impressed by her talent and dedication to her work, Willie Brown appointed Kamala Harris to the positions of the California Unemployment Insurance Appeals Board and the Medical Assistance Commission. In 2003, Kamala Harris became San Francisco's top prosecutor. In 2010, she was the first black woman to become California's attorney with 56.5 percent of the vote.

In 2004, Kamala Harris became friends with Barack Obama. When Barack Obama was running for President, Kamala was at the forefront of supporting him from California. In 2013, then-President Barack Obama called Harris the best-looking Attorney General in the country. In 2014, she married her fellow lawyer, Douglas Emhoff, and she became involved in the Indian, African and American tradition as well as the Jewish tradition. After this, in 2016, she was elected Junior American Senator from California.

In 1994, Kamala Harris came in contact with Willie Brown, considered a powerhouse in California politics, and from there, the two got to know well. Willie Brown was a member of the United States Senate and was 30 years older than Harris. Impressed by her talent and dedication to her work, Willie Brown appointed Kamala Harris to the positions of the California Unemployment Insurance Appeals Board and the Medical Assistance Commission. In 2003, Kamala Harris became San Francisco's top prosecutor. In 2010, she was the first black woman to become California's attorney with 56.5 percent of the vote.

In March 2017, Harris supported Joe Biden and said she would do everything possible to help him be elected the next President of America. In 2020, Kamala sought the Democratic presidential nomination. She set an unprecedented example by winning the election for the post of Vice President in the November 2020 elections. She took oath as the Vice President on January 20, 2021, and got emotional remembering her mother Shyamala Gopalan during her first address to the nation. She said, 'Today, I am present here because of my mother, and for this reason, I want to thank my mother, Shyamala Gopalan.' After the victory of Kamala Harris in the election, there was a lot of celebration in Tulasandrapuram village of Tiruvarur district of Tamil Nadu, India. Kamala is a well-known Black leader, but she has never given up on her Indian roots. Kamala says that my name means 'lotus flower.' It has great importance in Indian culture. The lotus plant grows underwater, but the flower blooms above the water surface, which is why the roots are firmly attached to the river bed.

After winning the post of Vice President, Harris said her victory was a start for women. She also said at a rally after the victory, "I may be the first woman in this office, but not the last. Every girl who looks at me tonight will understand that America is a land of possibilities. We have the power to build a better future! Thank you Americans for believing in us." Apart from this, she also thanked his party workers and people involved in the campaign.

The story of Kamala is a fascinating story of change. Kamala is the daughter of two immigrants. As mentioned earlier, her father, Donald Harris, was from Jamaica and taught at Stanford University and Kamala Harris' mother, Shyamala Gopalan, was from Chennai.

This journey of Kamala Harris tells that she is taking her every step abroad towards success, having cherished Indian values ​​and culture. Her life is an inspiration to all of us. One thing that we should learn from her journey is that we should never give up on our dreams. You can achieve success by making your struggles your strength. Kamala Harris faced many problems in her life but never gave up. It is the reason why she is an inspiration for crores of Indian women as well as for the whole world today.

Oprah Winfrey A Live Inspiration To Overcome All Adversity

6 Most Influential Women Entrepreneur of India