Wealth Earned By Big Boss Winners Will Leave You In Splits 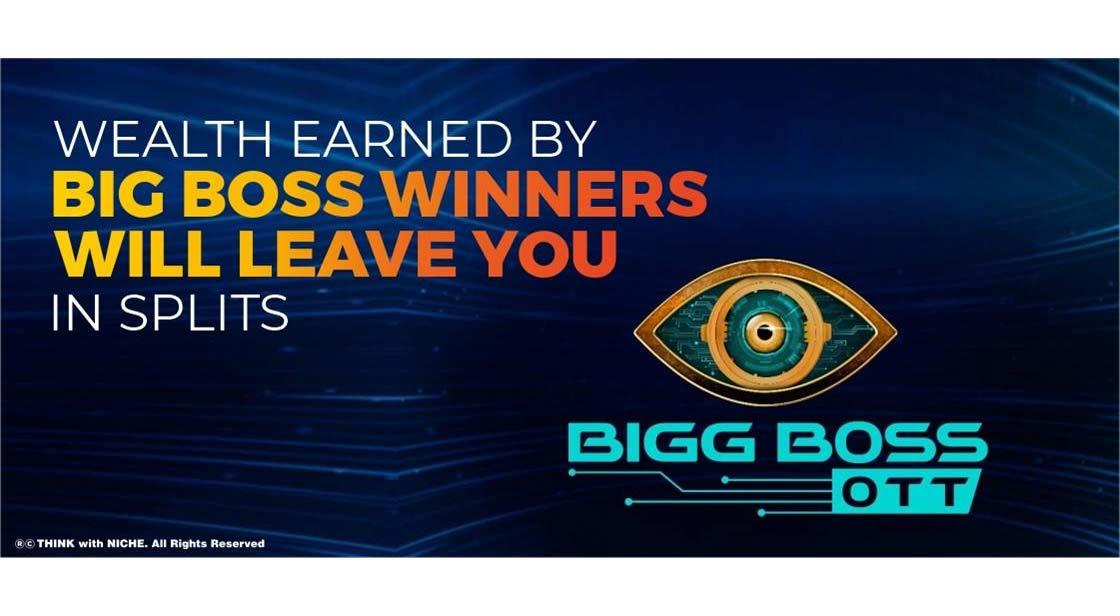 Big Boss is the most popular reality show, and the price of winning the trophy will surprise you. #ThinkWithNiche

A group of celebrity contestants lives together in a house with no contact from the outside world. They compete to win the cash prize and strive to avoid being evicted. Do you want to know how much the renowned Big Boss winners won? There are a few in lakhs and a few in crores. Here's the incredible list!

The winner of Bigg Boss Season 7 was Gauahar Khan. She was awarded a sum of Rs 50 lakh for her efforts. Her feud with Tanishaa Mukerji and her infatuation with fellow competitor Kushal Tandon has been the latest trend of the program. After Kushal was ousted owing to his conduct, she eventually quit the series. She rebounded, though, and took home the BB 7 title. Gauahar and her partner Zaid Darbar married on December 25, 2020. Along with Hina Khan and Sidharth Shukla, she appeared as a Toofani Senior on Bigg Boss 14.

Dipika Kakar, who competed against S Sreesanth, was crowned Bigg Boss 12 winner and collected Rs 30 lakh in prize money. Dipika's next project after Bigg Boss 12 was Kahaan Hum Kahaan Tum, which was canceled soon before the lockdown. She was most recently seen in Agra filming Sasural Simar Ka 2.

Rubina Dilaik was crowned the winner of Bigg Boss 14 in February. The actress was awarded a sum of Rs 36 lakh. The actress also received her income from the show during her time in the home, in addition to the prize money. Rubina Dilaik was paid Rs 5 lakh each week for appearing on Bigg Boss 14, according to The Khabri. She moved into the house with her husband, Abhinav Shukla, and has been a part of it since the beginning. She may have already earned Rs 95 lakh after spending 19 weeks in the Bigg Boss house. As a result, the actress must have made almost 1.3 crores from BB 14.

Prince Narula completed a hat trick by winning Bigg Boss 9 after winning Roadies Season 12 and Splitsvilla Season 8. His award was also worth Rs 50 lakh. On the show, the reality TV star also met the love of his life, Yuvika Chaudhary. In 2018, they tied the knot. Nach Baliye 9 was also won by the couple.

After competing on Bigg Boss 8 in 2015, Gautam Gulati gained a large fan base. He was awarded a sum of Rs 50 lakh. The actor from Diya Aur Bati Hum had a lot of conflicts on the show, though, by the conclusion, he had won over everyone, particularly the fans. In Pyaar Kii Ye Ek Kahaani and Diya Aur Baati Hum, he played a humorous character.

Late Sidharth Shukla managed to steal Rs 40 lakh as the winner of Bigg Boss 13. In the end, he defeated Asim Riaz in combat. After having a sudden heart arrest on September 2, 2021, the actor sadly passed away. He was last seen in Season 3 of ALTBalaji's Broken But Beautiful. He subsequently appeared as a special guest on Bigg Boss OTT Contestant with his highly anticipated girlfriend, Shehnaaz Gill.

If you enjoyed reading this blog, we have another one for you. Click on the link below to explore!

How To Build Emotional Resilience

Success Is A Process Not A Moment

How To Be Successful After Healing