Lata Mangeshkar: The Rhythm of the Soil! 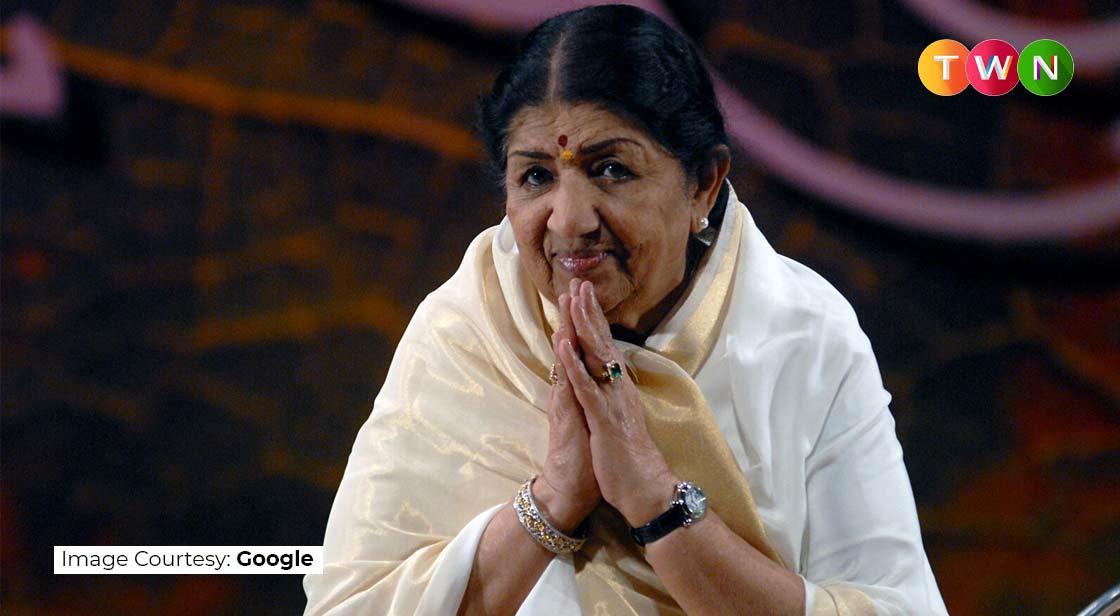 The Melody Queen, Lata Mangeshkar, left for her heavenly abode on 6th February 2022, leaving behind the entire nation in shock and sadness. The Nightingale may have become silent, but her magical voice continues to soothe the heart. This blog is just an ode to the soulful singer who will forever remain as the Pride of India! #TWN

Aajaa Re, Pardesi! This haunting melody from the old classic ‘Madhumati’ entered the corridors of my heart much like the beautiful stream flowing in the scene! In the same way, the magical voice of Lata Mangeshkar caught my imagination. My father was a huge Dilip Kumar fan and old Hindi classics like Madhumati, Anarkali, Paakeezah, Devdas, Mughal-e-Azam, Amar and Aan, and many more. He was very enthusiastic and persuaded us to watch it with him. We really enjoyed them on the VCR. However, the small screen did not excite him that much. He was a fan of the 70mm screen. I sometimes wonder how he would have reacted today in this age of the OTT! I really miss him! However, the one person that is common in all these movies is none other than the Nightingale, Lata Mangeshkar! It was the wondrous appeal of her voice that enhanced the charm of these movies.

We already know that the golden era of the ’50s and ’60s is famous for its music. Music Directors like Madan Mohan, Salil Chowdhary, SD Burman, C. Ram Chandra, Shanker Jaikishan, etc. were at the peak of their genius producing songs like Ye Zindagi Usi Ki Hai, Aayega Aana Wala, Jab Pyar Kiya Darna Kya, Lag Jaa Gale, and Kahin Deep Jale Kahin Dil, etc. And Lataji, with her magical voice, transformed them into everlasting musical treasures! They are as touching today as they were some 70 years ago!

Lata Mangeshkar, a Miracle of Nature!

Dilip Kumar, the late iconic actor, who inspired many superstars, from the great Amitabh Bachchan to Shahrukh Khan, and who considered Lata Mangeshkar as his sister rightfully said about her, "Just as the fragrance of a flower has no color, just as the flowing water or breeze has no boundaries, and just as the rays of the Sun have no religious divide, the voice of Lata Mangeshkar is just such a miracle of nature." Dilip Kumar and Lata Mangeshkar shared a deep bond and, Lataji went in deep shock at the death of the actor in July last year. Incidentally, Lataji was the first Indian to perform at the Albert Hall in London in 1974, and that performance was also her debut on the International stage.

The entire life of Lata Mangeshkar is filled with stories of her greatness! Lata Mangeshkar was born on 28th September 1929 in Indore. Her parents were Shevanti and Pt. Deenanath Mangeshkar was a noted theatre artist and classical vocalist. At the innocent age of 5 years, she checked the 13-year-old student of her father and taught him how to take a specific Taan that was very difficult. Needless to say, her father was quick to notice her talent and accepted her as his student. The proud father taught her the nuances of music.

However, she lost her father very soon, and the mantle of taking care of her family came upon her. Lata Mangeshkar was the eldest child among her other siblings, who are notable artists in themselves, like the very popular playback singer, Asha Bhonsle, Usha Mangeshkar, Meena Khadikar, and Music Director, Hridaynath Mangeshkar. Lataji had to join the film industry much against her wishes with the help of their family friend and noted Film Director of the 1930s, Master Vinayak! Her singing skills were still in the training phase, so she had to take up acting to suffice the family. She made her debut with Master Vinayak’s film “Pehli Mangala Gaur” in 1942. She also sang in the film, but wearing make-up and trimming her hair broke her heart! But she bravely continued to act in Hindi and Marathi films and theatre to earn money.

‘Lata’, the Name that Defines Glory!

Lata Mangeshkar was named Hema Mangeshkar at birth. But her father changed her name to Lata after the female character, Latika, from his play, 'Bhav Bandhan.' Lata, meaning the brave one! And how well she brought glory to her name!

Bracing for the Bloom!

Lata Mangeshkar came to Mumbai in 1945 when Master Vinayak’s company shifted their base there. It was a time when India was in the process of attaining Independence, and the Hindi Cinema was blossoming as an Industry. Music Composers like Anil Biswas and Naushad had made a mark with their melodious tracks. It was the era of famous Shamshad Begum, Suraiyya, and Noor Jehan, who enthralled the audience with their distinct nasal voice. The Cine-Fans were unaware of the magic that was going to unfold in the form of Lata Mangeshkar!

She was gradually catching the attention of film producers and music composers. Still, when well-known composer Khemchand Prakash wanted top taker her as the singer in a film produced by Ranjit Movietone studio, he was refused. They were still doubtful that her thin voice could create magic! Khemchand Prakash became disappointed and left the job. When he joined Bombay Talkies, they were making the classic Mahal. It is perhaps the first Hindi film having a supernatural theme.

It had the famous Ashok Kumar and the phenomenal beauty, Madhubala as the lead pair. Khemchand Prakash, the music director, selected Lata Mangeshkar to sing the song. The great Kamaal Amrohi of the Mughal-e-Azam fame directed the movie, and in the words of Usha Mangeshkar, “The final rehearsal started at 6 pm and the song was recorded at 7 pm the next morning!” Aayega Aane Wala had arrived! And, with it arrived the one who had to arrive, Lata Mangeshkar, the singer who sang like no one else in that age!

The Big Leap into the Era of Lata Mangeshkar!

The girl with two plats suddenly became the first preference of music directors and film directors in the entire industry. Her voice perfectly suited the actresses, and she garnered respect and praise from the audience and filmmakers alike. She learned Hindi, Karnatic, Classical, and Urdu. She learned Urdu because Dilip Kumar once commented on her diction. Such was her dedication to music! And then came a string of melodies that still touch your soul – Dam Bhar Jo Udhar Muh Phere, Ghar Aaya Mera Pardesi, Tu Ganga ki Mauj Main and the list is endless! From Raj Kapoor and Bimal Roy to Subhash Gai, Yash Chopra, and Karan Johar, she became the favorite singer of every director.

Lata Mangeshkar was not just a great playback singer but a strong woman also! Her self-esteem was above everything else for her! She was the first one to raise her voice for the right of singers. In those days, the music directors would get a royalty for their popular songs but, Singers did not get anything. Lata Mangeshkar had become very popular in the 1960s, and she got to sing with top male singers like Mohd. Rafi, Mukesh, and Kishore Kumar!

We must not forget that this was a time when women did not get the freedom to speak, and they were afraid that they would lose their job. But Lataji held her ground and refused to work with such filmmakers who denied her right! Ultimately, filmmakers like Raj Kapoor had to give in to her demands. She has sung some of the best songs for Raj Kapoor.

The Nightingale of India!

Lata Mangeshkar: The Rhythm of the Soil!

Lata Mangeshkar is not just a musician. She is a complete artist! She has transcended all the barriers of time and generations to become the icon that she is! She is the thread that had bounded the music of the 70 years together! It is said that Lata Mangeshkar was a great mimic which is why her voice suited all the actresses perfectly! “Hum to Bhai Aise Hain” from the famous 2004 Yash Chopra film “Veer-Zaara” reveals the mischievous nature of Priety Zinta’s character perfectly.

Likewise, Madhubala's haunting Aayega Aanewala of 1949 appeals to you in the same way as the naughtiness of Madhuri Dixit's Dil to Pagal Hai! Lag Ja Gale from Woh Kaun Thi hits your melancholic chord just as the melody of Humko Hamin Se Chura Lo from Mohabbatein inspires you! Such is the magic of Lata Mangeshkar. ‘Humko Hamin Se Chura Lo’ is perhaps one of the best Romantic songs of all time! And there are above 25,000 songs like these in about 26 languages. And each song is a listener’s paradise! She is undoubtedly the Rhythm of the soil that will continue to echo with her melodious voice!

It is a stark truth that Lata Mangeshkar, the revered lady, is no more, but it is also true that her melodious voice lives and with it lives the magic of Lata Mangeshkar, the graceful lady who loved to laugh, loved Cricket and, loved to sing. Can you hear - Rahein Na Rahein Hum, Mehka Karenge!