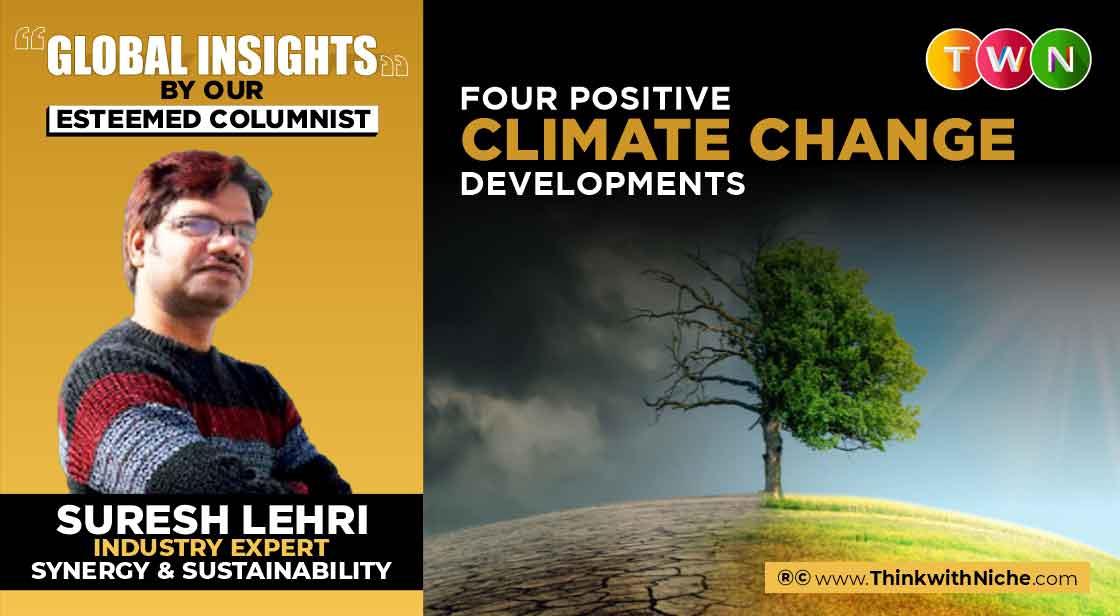 It's not surprising that you don't often see the words "climate change" and "optimism" in the same headline. The world's forests and oceans are still in danger, extreme weather events are becoming more frequent and severe, and we aren't on track to achieve the key goal of the 2015 Paris Agreement to limit global warming to significantly below 2degC by the end, and ideally 1.5degC by the end. Climate change mitigation is a huge undertaking and will require major changes in the global economy, energy transport, and agricultural system. It is a dangerous and cruel fantasy to think that we can stop climate change by forcing people to live in poverty and forgoing heating and cooling in an increasingly unpredictable and perilous world.

To combat climate change, we need to increase activism and adopt more aggressive climate policies. We must, however, invent and build solutions to the problem. There are still some positive signs in this maze of obstacles. The good news is that there are some signs that we can.

The Climate Crisis is now evident. Both humans and nature are feeling the effects of the melting glaciers and more extreme weather events. There is some good news about Positive Development In Climate Change. Every day, we see more people, businesses, governments, and organizations responding to the crisis. People are coming together to make concrete steps to reduce the worst effects of climate change.

We can all work together to change our course. We can create a pathway to a future where businesses are dependent on renewable energy and cities are rethinking waste disposal and transport. And we can work together with communities and individuals to prevent the worst effects of climate change.

1- The Planet will stop warming in 3 to 5 years

Most people have heard that the planet will heat up for 50 more years even if we stop using fossil fuels. This was based on simplistic computer models. Michael E. Mann a Penn State climate scientist, said that if humans stop emitting carbon now, the oceans will take up more carbon faster. is not 25-30 years, but "more than three to five years."

Mann's assessment is not supported by other scientists. They estimate that temperatures will peak in the decade following the end of fossil fuels. The study's authors also pointed out that temperatures wouldn't immediately start cooling, but that heating would peak 10 years later.

This is not new news. Mann spoke in 2020 and the computer models have been updated over the last decade. However, this is an important fact that is rarely mentioned by the media.

Although we are still far from ending our oil-oil relationship, it is encouraging to know that stable weather is possible.

A 2019 study found that by restoring natural terrestrial carbon sources, such as mangroves and peat bogs, we could store and sequester the equivalent of 23.8 million tonnes of CO2 each year. According to the study, restoring these areas would not be economically feasible so an alternative figure of 11-15 billion tonnes of CO2 per year is more likely. This means that 30% of our CO2 could be sequestered by natural carbon sinks.

In 2018, the Royal Society released a report that estimated that reforestation could remove between three and 18 billion tons of CO2 each year.

This is why it's so good news. This means we can remove substantial amounts of CO2 without any new technology, expensive equipment, or excessive costs. It is enough to stop destroying our forests and our soil, and instead repair these carbon sinks.

This will not only help combat the climate crisis but also increase biodiversity. A biodiverse system will be more resilient to changes and more productive economically. Because the system is balanced, it is more stable and can protect us against pandemics.

3- Rewilding Can Be More Effective Than Planting

We now have the next piece of good news. In recent years, there has been much talk about planting trees. In October 2019, a study showed that there was still room in the world for another 0.9 million hectares of forest. This would allow us to plant more than 1 trillion trees.

According to the study, trees are "one among the most efficient carbon drawdown solutions to date" and that 1 trillion trees would capture more than 200 gigatons of CO2. This would be 25% compared to the current atmosphere.

The study gained worldwide attention and people began to embrace tree planting as a way to combat climate change. Billions were spent on tree planting schemes. SalesForce.com CEO Marc Benioff, along with Jane Goodall, created the Trillion Tree Challenge. The Nature Conservancy's Plant a Billion Trees. Bonn Challenge was also established before the study was published, but has received more attention.

Tree planting projects can be problematic. They often become monocultures which is a lack of biodiversity. This makes them very vulnerable to disease.

Trees must also be planted in the correct place and at the right time to ensure they survive. Many past projects have shown that 90% don't survive if they aren't replanted within 5 years.

The good news? studies show that protecting and rewilding can be more effective than planting. A study published in Nature states that natural forests are better at storing atmospheric carbon. However, conflicting priorities can impede carbon storage potential.

You can support and encourage rewilding by adding compost to the soil or setting up an "Insect Hotel ", which allows pollinators to breed. In your garden or on your farm, an insect hostel might be quite useful. They not only draw and support helpful insects like pollinating bees, spiders, ladybugs, and others, but they can also help keep out insects that would harm your plants. Some projects also have reintroduced native animals, such as wolves to Yellowstone Park or bison for the UK.

We should sometimes intervene when the environment is severely damaged. A mangrove might be destroyed by shrimp farming or agriculture, and water may not flow through it. Mother Nature will take control if we return hydrology to its original state. Nature is intelligent and can repair itself.

Rewilding is more cost-effective than planting and takes less time. This makes it more scalable.

One of the most common arguments against switching to fossil fuels is that it would cost jobs and harm the economy. However, the World Economic Forum has proven this is false. In 2021, a report stated that businesses could create $10.1 trillion annually in business and 395 million jobs if they repaired nature.

This would mean transforming three industries that account for about 80% of nature loss: energy, infrastructure, and food.

Vietnam, for example, invested $9 million in the restoration of its mangroves damaged in 166 villages. This prevented soil erosion and flooding, and more than $15 million was saved from the damage that could have been caused by extreme weather. Mangroves are one of the most biodiverse places on the planet. They protect the oceans and provide habitats for fish, shellfish, and birds. The communities' per-hectare aquaculture yield increased by between 210 and 789 percent.

A 2018 study estimated that the value of nature and its goods and services is $125 billion. The basis of the global economy is the raw materials it provides. We would all be happier if we worked with it instead of against it.

These examples show that commitment across key areas is making a difference in the fight against global warming. This also shows how the depressing truth that global warming is caused by humans can be turned upside down to make it an environmental rallying call. We can be the architects of global warming's demise if humans are the main cause.