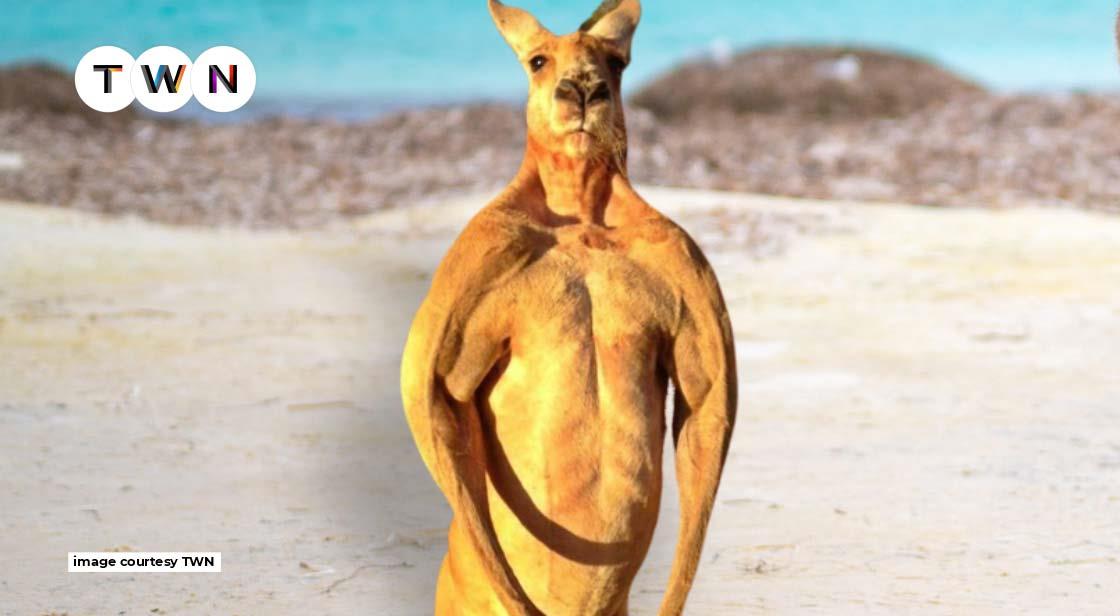 Kangaroos have muscular bodies for a variety of reasons. Male muscular kangaroos are more appealing to females than those with fewer muscles. Kangaroos have the strongest and most muscular legs of any hopping animal. Above all, kangaroos are genetically predisposed to be muscular. Pure muscle accounts for 50% of their total weight. As a result, they are naturally buff animals. These marsupials have a variety of things working in their favor that make them highly muscular.  In this article, we will talk about why kangaroos are so buff! #TWN

Australia! Home of marsupials and a country like no other. We all know that Australia has marsupials all over the place. For those who don’t know what marsupials are, they are the animals that have pouches to carry their young ones. Koalas and Kangaroos are the two known marsupials. Anyway, did you notice that male kangaroos are buffed like Arnold Schwarzenegger? Every Male kangaroo is buffed with big biceps that can put a normal human to shame.

Kangaroos have muscular bodies for a variety of reasons. Male muscular kangaroos are more appealing to females than those with fewer muscles. Kangaroos have the strongest and most muscular legs of any hopping animal. Above all, kangaroos are genetically predisposed to be muscular. Pure muscle accounts for 50% of their total weight. As a result, they are naturally buff animals.

You've probably seen kangaroos on the roadside or at your local zoo. They usually just stand around and don't appear to be very intimidating. Kangaroos, on the other hand, are actually quite buff animals! Particularly red kangaroos.

They are large animals, with the largest males weighing up to 200 pounds. Male kangaroos regularly engage in brutal boxing matches and fierce fights for dominance, and it's not uncommon to come across a seriously jacked kangaroo.

The question still remains, why are kangaroos so buff and strong?

Let’s answer this right away.

5 Reasons Why Male Kangaroo Are So Buff and Strong

Red male kangaroos are just a mass of pure muscle – broad, firm chests & abdomens and arms with bulging biceps. Kangaroo biceps are a treat to watch.

Kangaroos aren't exactly peaceful animals, and fights and skirmishes are common among them. The biggest fights, however, are between the sexes. These battles can be bloody and brutal, with the strongest, fittest, and most robust kangaroo usually emerging victorious.

Male fights are referred to as boxing matches, and they serve as the ideal workout, just like an actual boxing match. The males grapple, push each other around, and punch each other as if they were boxers. They also use their razor-sharp front claws to strike. Kangaroos also have a unique "kickbox" move in which they maintain balance on their tail and kick their competitor with their hind legs.

These moves indicate that they are using all of their musculatures and are essentially working out while fighting. After all, the more energetic they are, the more muscle mass they gain. Furthermore, the single most powerful male is usually someone who wins the battle. As a result, being the strongest and most toned pays off!

Kangaroos have a unique and different gait in which they jump around, and the way they do this innately gives them really great musculature. This is due to the fact that kangaroos power their movement with their hind legs and large back feet, which contain muscles and tendons. Kangaroos generate energy to hop by using the Achilles tendon that runs all the way down their hind leg. Their tendons and ligaments extend and provide energy with each jump. This is then distributed as their muscles contract, pushing their legs away from their body – similar to a giant spring. Kangaroos travel hundreds of miles each day looking for food. They cover an estimate of 25 to 30 feet per leap and can jump up to 10 feet up in the air when necessary. All of this leaping while supporting a huge body requires kangaroos to have very strong leg muscles, which hopping such long distances helps them develop.

As previously stated, fighting causes kangaroos to develop overly muscular bodies. However, males fight primarily for supremacy and access to females. The dominant male is usually the only kangaroo in the mob who mates with the females, so if he ends up winning all the fights, he gets the ladies. Furthermore, research has also shown that female kangaroos are allured to the most muscular males. So, all of that exercise is paying off!

The red kangaroo is the largest species in the family and the world's largest marsupial. These animals can move in a variety of ways thanks to their two forelimbs and two hind legs, as well as their muscular tail. When standing upright, the tail is frequently used for stability and as a "third leg." The strength of their tail equals the combined strength of their hind legs.

These ultra-aerobic animals have big hearts and high levels of muscular mitochondria, both of which are required for such a muscular body. Horses, dogs, and antelope are examples of similar animals. The primary distinction in aerobic potential among animals is related to the total mitochondria number in skeletal muscle and organs.

The red kangaroo's muscle mass accounts for half of its body mass. This fact is even more intriguing when you consider that the majority of those muscles are located all around the hind legs and pelvis. Further research has revealed that more 'athletic' organisms may have 3 times the oxygen uptake of muscles. In comparison to less active animals of comparable body mass.

Kangaroos, horses, and dogs have bigger hearts than goats and cattle. They also have a greater number of mitochondria. As a result, animals that engage in more physical exercise have more muscle mass than less active species. Humans show the same results.

Different species of animals use various techniques and approaches to attract females.

Male kangaroos have a distinctive way of approaching females. They'd "box" with other guys. And they would flaunt and flex their muscles in a way to entice a female. When it comes to mating, kangaroos' muscular bodies are crucial. They live in mobs, which are clusters of up to ten people. The size of a mob is determined by species and location.

Throughout the mating season, the largest and most muscular male in any mob is dominant.

Females attract male attention during the ovulatory cycle (reproduction cycle). This usually results in male kangaroos fighting. Fights for females are usually short, but they can last a long time and be very intense at times. Fights are usually won by the larger and more muscular males. Male kangaroos don't ever stop growing, allowing them to maintain their mating supremacy as they age. Female kangaroos are drawn to larger, more muscular kangaroos. As a result, the ones with the most muscle are more likely to be selected by female kangaroos.

Also Read: These Perfect Travel Destinations For All Zodiac Signs

FAQs About Why Kangaroos Are So Buff