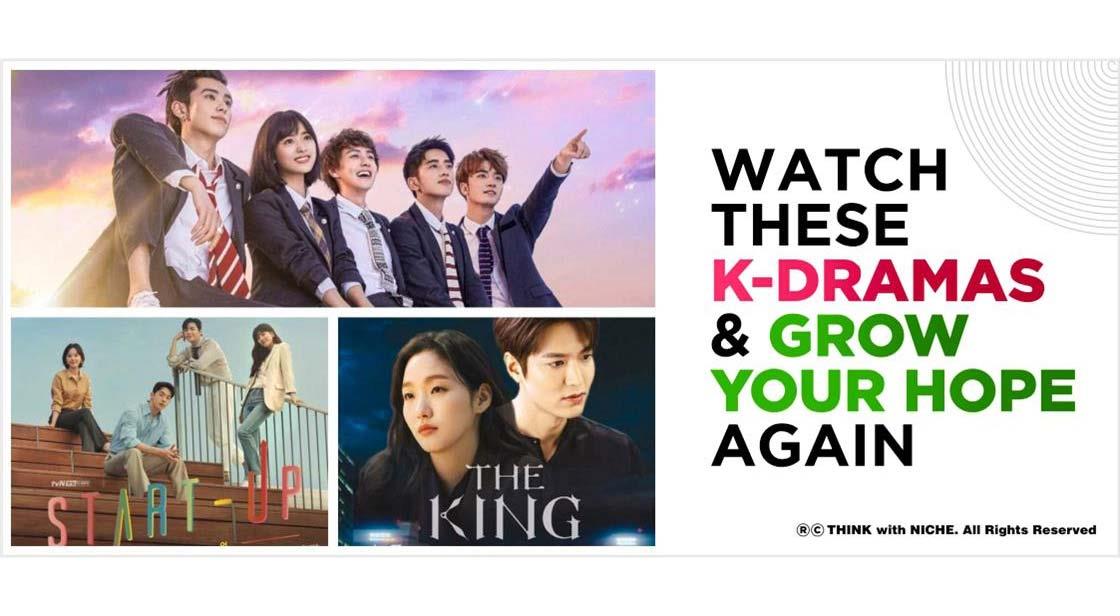 It might be tough to find the desire to fulfill tasks, no matter how modest or large they are. Accepting defeat or attempting to delay are both simpler options. Be inspired and motivated by these heroes who persevere in the face of adversity to achieve their goals. #ThinkwithNiche.

A prosperous life is not easy to achieve. We've all had instances when we felt hopeless. It might be difficult to find the motivation to complete chores, no matter how small or large they are. Accepting defeat or seeking to postpone the inevitable are both easier options. Nothing, on the other hand, is more satisfying than attaining your goals. Whatever it is, here are five entertaining and timely K-dramas to inspire us to never give up on our dreams, no matter how difficult the job search becomes. These dramas convey fresh, upbeat, and inspiring stories about what it means to be alive and how one's goals and ambitions change over time.

Korean drama Start Up is about a start-up corporation, as the title suggests. Seo Dal-Mi (Bae Suzy) aspires to be the CEO after being inspired by her late father. Won In-Jae (Kang Han-na) and Seo Dal-mi are sisters who became estranged when their parents divorced and developed a rivalry. Dal mi meets Nam Do-San (Nam Joo-hyuk), the founder of the AI business Samsan Tech, through a childhood experience. The team works on inventing a new AI project under the tutelage of Han Ji-Pyung (Kim Seon-Ho), the team leader, after being accepted into Sandbox's residency program. This drama depicts the path of a successful startup that faces several challenges on its route to realizing its goals. Start-Up tells the story of four people that are passionate about start-ups and technology. As they pursue their tech aspirations, the quartet learns and matures.

In series 1, Go Hye Mi (Bae Suzy) is a classical music major who must give up her passion by enrolling at Kirin Art High School to pay off her father's debt. She must, however, recruit two additional pupils to attend the school to enroll conditionally. The high school falls bankrupt in the second season, and Oz Entertainment takes over the school. The corporation relocates its juvenile idols-in-training to comply with a new rule requiring minor performers to get 20 hours of schooling each week.

In series 2, Shin Hae Sung (Kang So Ra) wants to be a musician, but she only knows how to read music and not how to play it. Jin Yoo Jin (Jung Jin Woon), a former child star, defies school rules and gets into a lot of trouble in his goal to become a hard-core rock star. He also had a fight with JB, a well-known member of the group.

To summarize, Dream High 1 & 2 is a high school drama with a creative twist. Kirin Arts High School is a school for aspiring singers, dancers, and composers; Kirin High's remedial section houses the school's failed pupils. The Dream High series is a hopeful K-drama that asserts that, at the end of the day, if you work hard and persevere, you may achieve your goals.

The Itaewon Class Korean drama was one of the top Netflix Korean dramas of 2020 due to its meaningful plot and representation of societal concerns such as racism and gender inequality.

Park Sae-Royi (Park Seo-Joon), the proprietor of DanBam, a bar-restaurant in Itaewon, has set himself the objective of becoming a successful company owner as a part of his vengeance plan against a food conglomerate. The plot revolves around the DanBam team members, who discover the value of teamwork and acceptance of diversity as they work together to develop the company. Because of Jangga Group's CEO and his son, Sae-Royi is expelled from school, loses his father, and ends up as a criminal. These unjust occurrences would be enough to make anybody angry, but Sae-Royi manages to focus his rage on the creation of a bar restaurant. Jo Yi-Seo (Kim Da-Mi), a ruthless and astute businessman, agrees to assist Sae-Royi in expanding his company. The couple, along with the rest of the DanBam team, battles back against Jangga Group and achieves their aim.

The Korean drama Fight For My Way follows four childhood friends as they grow up and decide to pursue their goals. It serves as a reminder that it's never too late to pursue your aspirations. The drama depicts not just the resolve required to obtain one's ideal career and the tough path required to achieve it, but also the journey of friendship and love as they pursue their goals. Go Dong-man (Park Seo-Jun), Choi Ae-Ra (Kim Ji-Won), and Baek Sul-Hee (Song Ha-Yoon) are unhappy in their current jobs. Ae-ra, on the other hand, hasn't given up on her ambition and is looking for a fresh chance. This encourages Dong-man to pursue a job that he enjoys. The four friends develop as they follow their aspirations and improve their lives in the face of harsh people and circumstances. This drama reminds us that even though we are trapped in a predicament, we can still pursue our dreams.

Run On is a Korean drama about two couples from different origins. Ki Sun-Gyeom (Im Si-Wan), a former national team sprinter who retired from the sport, and Oh Mi-Joo (Shin Se-Kyung), a movie translator, are the first pair. Meanwhile, the second pair consists of Seo Dan-ah (Choi Soo-young), the CEO of a sports agency who confronts gender discrimination and is pushed back on the Seomyung Group's list of prospective successors. So, she fights tooth and nail to reclaim what was rightfully hers, and Lee Young-Hwa (Kang Tae-Oh), a university art major, enters her life. According to this scenario, nothing is more essential than our happiness, so we should do everything we want without hesitation.