Raksha Bandhan: A Strong Bond Tied By A Delicate Thread 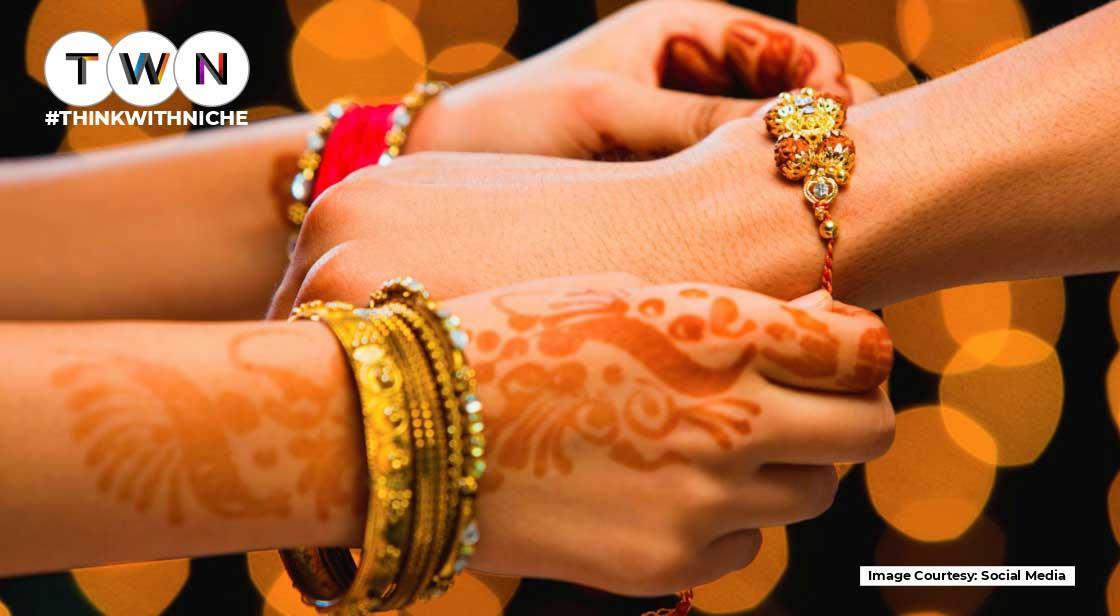 Raksha Bandhan is one of the most popular festivals in India. The real beauty of this festival lies in the fact that this festival is not just limited to blood relations, but it can also be celebrated by people of all religions who take the feelings of brother and sister in their hearts.

The origin of this festival is slightly different as compared to other Indian festivals. On the day of Raksha Bandhan, sisters tie Rakhi on their brother's wrist and along with it wish for their brother's long life, while brothers take a pledge to protect their sister. Let's know more about Raksha Bandhan.

Festivals in India, a country of diverse cultures and multilingual people, are a symbol of unity. These traditional celebrations are a reflection of a society where positive ethics flourishes and cooperation is a norm. People celebrate festivals regardless of their religion or caste. Raksha Bandhan is an Indian festival that celebrates the strong bond between brothers and sisters. This festival's true beauty lies in its ability to be enjoyed by all people of any religion who have sibling feelings.

Each festival in the Hindu Panchang has a profound impact on the lives of its people. The people can revel in the rich culture and traditions of their festivals, from the mythological stories that they use to perform basic rituals and customs to the joys of celebrating them. Raksha Bandhan, a well-known festival, is dedicated to the close and loving bonds that siblings have with each other. Rakhi, the sacred thread that binds them together, strengthens their relationships and makes them even stronger. This festival celebrates the vow of protection that a brother makes to his sister. This festival emphasizes the importance of siblings and how they can make one's life better and more joyful.

Legends from the Hindu mythologies as well as historical instances can provide a glimpse into the history of Raksha Bandhan. There are many stories in mythology and history that can be attributed to Raksha Bandhan's origin.

Goddess Lakshmi was worried about Lord Vishnu's whereabouts when he disappeared from His Abode to guard King Bali. She assumed the form of a Brahmin woman to find him and traveled to Bali, where Lord Vishnu was acting as a gatekeeper to fulfill his promise to protect the King. She asked King Bali for shelter, which he granted. It flourished and prospered because of her presence. King Bali was impressed by her, and they developed a close bond of sibling affection. She asked her husband for Rakhi from Bali in return for her Rakhi. He confronted her with the truth and returned Lord Vishnu. He also made a lifetime promise to protect her.

This legend also relates to the origin of Raksha Bandhan. Indrani, Lord Indra's wife, tied a sacred string around her husband's wrist to protect him against the demons. This was done in order for him to win the war. This thread gave Indra the ability to resist the powerful demons and made them taste the dust during battle. Although it may sound odd, Raksha Bandhan is primarily about siblings, but it is also a bond that promises protection to a dear friend.

This mythological epic describes various relationships and demonstrates the power of sacred threads. In the tale, Draupadi and Lord Krishna tie a piece of cloth from her saree together to stop Lord Krishna's bleeding. God protected her from insults and embarrassment at the court of the Kauravas. Another legend states that Kunti (the mother of Pandavas) tied a sacred thread around Abhimanyu's wrist as a protection band for war.

Fearing an attack by the powerful Mughal ruler Bahadur Shah Zafar she sent Humayun a Rakhi, making him her brother, and asking for his assistance. Humayun was open to her Rakhi and sent his army to Chittor in order to save her kingdom and Zafar. Although he tried to protect her with all his might, fate had other plans. Zafar had already conquered her kingdom by the time he reached the palace.

Puja is a tradition that has been practiced for centuries to invoke the blessings and protection of God for the well-being of family members and the successful completion of a task. Raksha Bandhan observes Rakhi Puja, which is also performed by sisters in order to bestow long, healthy, and successful lives on their brothers.

People take a holy water bath and then dress up in new clothes and sing the usual prayers. The sisters prepare a special rakhi Puja Thali in which they make a Swastika using kumkum, place Roli and chawal, sweets, and a lit diya.

Raksha Bandhan, which is celebrated on a full moon in the month of Shravana (Hindu traditions) also refers to it as Rakhi Purnima. Raksha Bandhan, aside from the Rakhi tying ceremony, is considered an auspicious occasion for performing various rituals according to the Hindu calendar. People celebrate the spirit of the celebrations throughout the country, following various customs specific to their areas.

This celebration is held by the farmers of the central part of India. In the states of Madhya Pradesh (Chhattisgarh), Chhattisgarh (Bihar), and Jharkhand, Rakhi Purnima are called Kajri Purnima. This ritual is mostly observed by mothers blessed with sons. This ritual also marks the beginning of the sowing season.

Rakhi Purnima, which is celebrated by the Gujarati people, is a Pavitropana. It's a time when they offer their prayers to Lord Shiva, the God of Death. They also use a cotton filament that has been dipped into Panchagaivya (a liquid made from five pure elements of cow), in order to pray to him. Cow's milk, ghee, and curd are tied around the Shivalinga. It is also called Putrada Ekadashi by Bhavishyapurana.

Other rituals performed on this day include Jhulan Purnima and Lumba Rakhi ceremony. Gamha Purnima and Jandhyam Purnima are also performed.