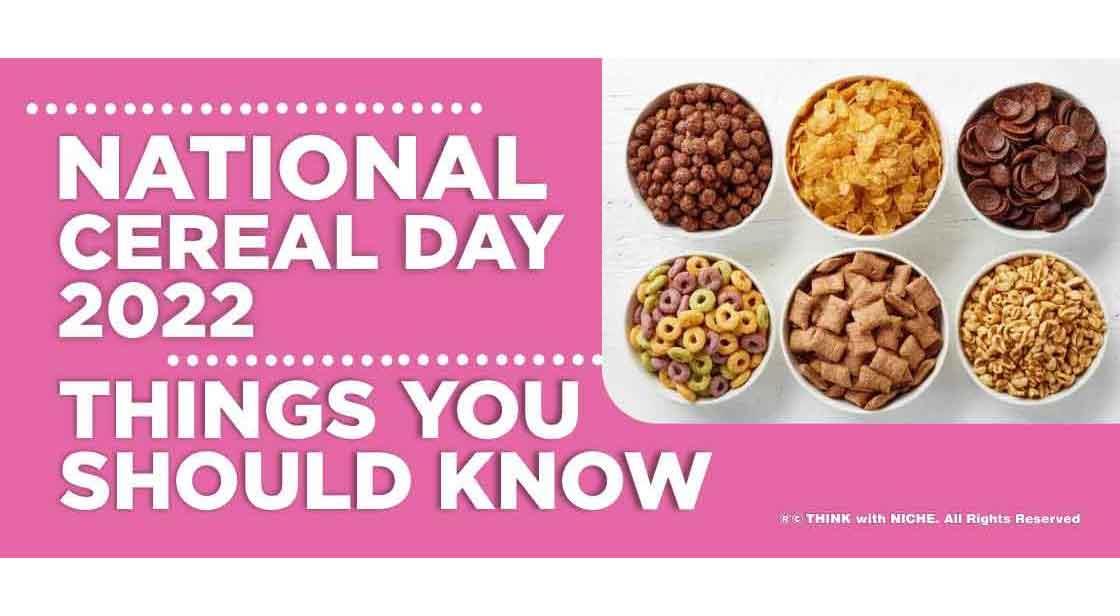 There isn't a single person alive who does not know that a bowl of cereal, a spoon, and some milk (Lactaid, Almond, or Soy milk all count!) equals a mouth-watering feast! Fiber, sugar, raisins, or even lucky charms - the tastes and prizes in each box are endless, and they may brighten up even the most mundane morning. So, let's take a look at all the reasons why National Cereal Day, March 7th, should be on your calendar and your menu! #TWN

Americans suffered from health problems as a result of their meat-based diets during the Civil War. They were suffering from serious stomach problems. It was deemed unhealthy, with some claiming that it was God's method of punishing humanity for eating too much beef or pork. It prepares the door for some urgently needed changes in the American diet, and our hero Ferdinand Schumacher is credited with starting the cereal revolution!

It wasn't always like this! Before the cereals we adore today, it was completely different. Cereals come in a wide range of flavors, colors, forms, and tastes these days. It caters to the demands of all types of people, regardless of their age or taste preferences. However, cereals used to taste dull and difficult to swallow! Yes, some of you may find this difficult to believe, but it is true.

We all know that all major revolutions begin in modest, unexpected places. The cereal revolution had a similar story. Ferdinand Schumacher was an immigrant from Greece. In the backroom of a small business in Akron, Ohio, he had a hand oats grinder. He had no idea that this technology would change the diets of millions of Americans and others all over the world! The German Mills American Oatmeal Company, founded by Schumacher, was the first national commercial oatmeal producer. In 1877, he also adopted the Quaker sign, which he later filed as a trademark for breakfast cereal.

Following then, records of cereals revealed James Caleb Jackson's development of granular in 1863 in the United States. He was Hillside's Our House. In Dansville, New York, this location became known as Jackson Sanatorium. However, because bran nuggets had to be soaked overnight before being ingested, he was disappointed that they did not achieve much favor among Americans.

The world had no idea at the time that this was only the beginning of a new revolution. The cereal sector grew in importance as people became more health-conscious. Dr. John Harvey Kellogg experimented with granola. He essentially attempted to cook wheat and wrap it into thin films. The finished product was placed in the oven to bake. In 1891, he received a patent for his invention, much to his astonishment. Corn flakes, which he introduced in 1895, was a watershed moment in the cereal revolution.

Dr. John Harvey Kellogg's brother, William Kellogg, broke away from his brother in 1906 and gained control of the corn flakes business. He founded the Creek Toasted Cornflake Company, and his signature became the company's trademark. It was utilized for the product's insurance and quality assurance.

Charles W. Post's introduction of Grape-nuts came after these inventions. Soon after, Post-Toasties were introduced.

The entire name of your favorite cereal, Cap'n Crunch, is Horatio Magellan Crunch. It has a fascinating backstory. Mr. Crunch was born in the Sea of Milk on Crunch Island. Mr. Crunch's uniform featured only three stripes instead of four, according to a food blogger in 2013. As a result, he became a Commander rather than a legitimate Navy Captain. When Mr. Crunch learned of the reports, he responded with a tweet that stated, "of course, he was a Cap’n as it is the Crunch and not the clothes that make a man." This tweet demonstrated his sporting attitude and became incredibly popular, giving rise to the term!

Cereals are not only delicious, but they are also highly nutritious. Fiber, iron, and vitamin B are all abundant in them. It comes in a wide range of flavors. As a result, practically everyone has a favorite and finding someone who despises cereals will be a difficult feat.

We, as humans, have a proclivity to experiment with new things to change everything. We found a method to destroy this nutritious meal sooner or later by adding sugar to it. But believe me when I say it tastes great! Ranger Joe Popped Wheat Connie originally appeared on shelves in 1939. It was a sweetened cereal, but it didn't take long for it to become popular. It was mostly aimed at children. Television played a role in this as well. The majority of cartoon characters began to appear on cereal boxes, and cereals began to be addressed in cartoon shows. It piqued the interest of children, who were eager to try them after learning that this was the source of their beloved characters' incredible strength!

How Can We Observe National Cereal Day?

Here are a few unique ways to commemorate this exciting day!

Let's have a look at some interesting facts about this day!

Even after learning so much about the history of cereals and having a well-defined timeline of their evolution, the genesis of National Cereal Day remains a mystery! This enigma persists, and many fans are trying to come up with a plausible explanation for its genesis. Eat your favorite cereal until then, and enjoy the day!