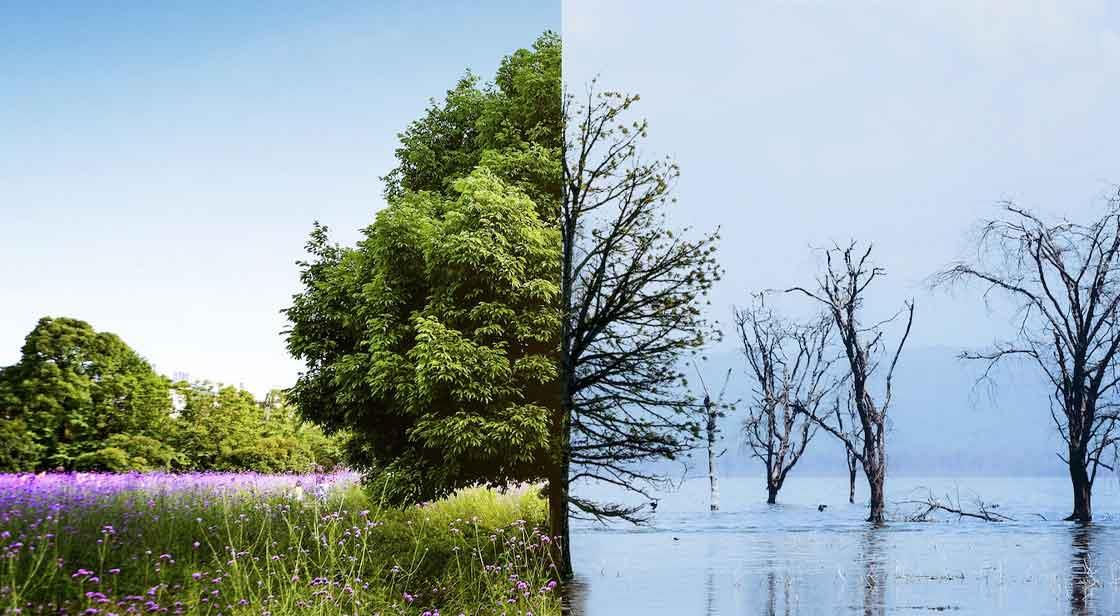 The term "global warming" refers to an increase in the Earth's average temperature over time. Climate change is the term used to describe how weather patterns will alter around the world. Climate averages, as well as temperature and precipitation extremes, could all vary as a result of these changes. Let's talk about Global warming vs. Climate Change Difference. #TWN

Most people confuse between the two, but there is a lot of difference between global warming and climate change.

In newspaper and television reportage, the terms "global warming" and "climate change" are frequently used interchangeably, yet they are two distinct concepts. The rise in global average temperature is referred to as global warming. Climate change refers to how the climate of different parts of the world varies over time, mostly as a result of rising global average temperatures and the resulting changes in the water cycle, ice cover on land and in the polar oceans, and land cover. Climate change can also occur naturally as a result of variations in the sunshine, mountain formation, and the migration of continents across the globe through time. The term "global warming" refers to an increase in the worldwide average temperature.

Climate change entails not just a shift in temperature, but also a shift in global weather patterns, which could have an impact on precipitation averages and extremes. One effect of global warming, for example, could be that the northern section of the Northern Hemisphere warms up faster than the rest of the world. This is because rising temperatures are projected to melt massive polar ice fields, leaving darker open terrain in their place. The dark earth would absorb sunlight far faster than the reflective ice, resulting in intense heating. Other factors may cause certain areas to receive more rain, while others are more prone to have long-term droughts. The reduction in temperature differential from the equator to the poles could reduce winds and storm activity, but the higher temperatures would have more energy overall, so it's unclear how this would affect general weather patterns.

"Global change" refers to the additional side effects of changing temperature and climate. Ecological changes, geological changes, sea-level rise, changes in ocean circulation and acidity, and societal repercussions are all examples of global change. These changes lead to a disruption in our "normal" or expected climate as a result of global warming, as well as the consequences for life and society.

One of the primary providers of climate change research is the United Nations. Climate warming, according to the UN's Intergovernmental Panel on Climate Change's Sixth Assessment Report issued in 2021, would cause "irreversible" changes to the ocean and atmosphere. Global temperatures will almost certainly continue to increase, climbing by at least two degrees Celsius by the year 2100, according to the IPCC's projection. Only by limiting cumulative greenhouse gas emissions as soon as possible can a more significant climatic crisis be avoided. The National Climate Assessment, which is required every four years under the Global Change Study Act of 1990, is one of the most respected pieces of research in the United States. The 2018 report examines the economic impacts of climate change, anticipating dire implications in areas like agriculture, water supply, infrastructure, and human health.

The Potential Effect of Global Warming

The future trajectory of climate change will be determined by society's actions, particularly the emission of greenhouse gases from the combustion of fossil fuels. Since the Fifth Assessment Report (AR5) was published in 2014, the IPCC has offered a variety of alternate emission scenarios to explore potential future climate impacts. Various assumptions about future rates of human population growth, economic development, energy demand, technology improvement, climate mitigation, and other aspects are used to create the scenarios.

The variances between the several simulations are due to differences in the climate models employed and assumptions made by each emission scenario. These estimates are cautious since they do not account for positive carbon cycle feedback (see above Feedback mechanisms and climate sensitivity). Lower-end emissions scenarios, specifically scenarios that assume immediate reductions in greenhouse gas emissions, have a reasonable chance of keeping additional global surface warming below 2.0 °C (3.6 °F) by 2100, according to the IPCC's AR5 and AR6 reports—a level considered by many scientists to be the threshold above which pervasive and extreme climatic effects will occur.

Climate change is expected to result in changes in precipitation patterns all across the world. As a result of the forecast poleward shift in the jet streams, increased precipitation is expected in the polar and subpolar areas, while decreased precipitation is expected in the middle latitudes of both hemispheres. While rainfall near the Equator is expected to increase, rainfall in the subtropics is expected to decrease. Both events are linked to a strengthening of the tropical Hadley cell pattern of atmospheric circulation, which is expected to occur. The EU has devised the most sophisticated regional climate-change policy to date, in part to meet its Kyoto Protocol commitments. The 15 EU countries that have made a collective commitment under the protocol have lowered their greenhouse gas emissions by 2% since 1990, yet it is unclear whether they can fulfill their 8% reduction target by 2012.

The EU set a collective aim in 2007 for all 27 member states to cut greenhouse gas emissions by 20% below 1990 levels by 2020. To attain this goal, the EU developed the world's first multilateral carbon dioxide emissions trading scheme in 2005, which covered over 11,500 big installations throughout its member states. Despite differences in approach, governments began talks on a new treaty to replace the Kyoto Protocol after it expired, based on an agreement reached at the United Nations Climate Change Conference in Bali, Indonesia, in 2007. The international community agreed to develop a comprehensive legally enforceable climate treaty to replace the Kyoto Protocol by 2015 during the 17th UNFCCC Conference of the Parties (COP17) in Durban, South Africa, in 2011.

To combat global warming and climate change, societies must develop ways to fundamentally alter their energy consumption patterns in favor of less carbon-intensive energy generation, transportation, and land use management. A rising number of countries have stepped up to the plate, and there are other things that individuals may do as well. Consumers, for example, have more options when it comes to purchasing electricity supplied from renewable sources. The operation of more energy-efficient automobiles, the use of public transportation when feasible, and the shift to more energy-efficient household products are all additional initiatives that would cut personal greenhouse gas emissions while simultaneously conserving energy.

How To Contribute To Sustainable Development