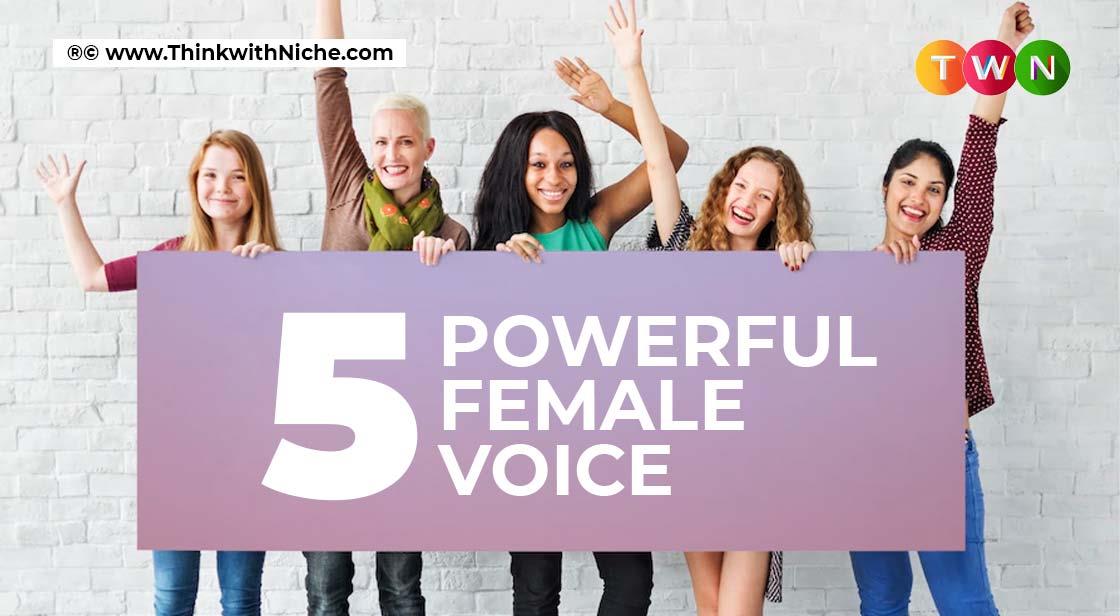 Feminism is no longer considered outlawed, shameful, or a term reserved for hippies. It's an important topic that needs to be discussed creatively, through mediums other than the news, which are less stressful. Instagram is one of these platforms, but it can also be stressful because it is easy to compare yourself to other women and their perfectly-curated lives. However, if used correctly, it can be a source of inspiration. Every day, seeing these real, intelligent, and strong women's Instagram posts empower me. I have made a list of 5 Influential Women on Instagram that you must follow. #TWN

For decades, most public spaces and platforms have been occupied by men. Men with mics in their hands have long dictated how the world should work. They have made all the rules; rules that benefit them and put others on the margins of society. But not anymore. The democratization of the internet and the rise of feminist voices have assured that these men no longer crowd the stage with their stale, prejudiced arguments. As feminism is slowly gaining weight amongst the mainstream crowd, many female voices have erupted straight out of the volcano. Their perspective, rage, and a spirit for demanding what rightfully belongs to them is a much welcome change on social media platforms such as Instagram.

It is one of the best things to have come out of the democratization of the internet which further led to the mass popularity of social media apps like Instagram. Now those who couldn't get up on the stage built by the powerful, are building their stage and making their demands heard.

Starting your day with a message of female strength, an artistic photo of a daring outfit, or a two-line poem on resilience can instantly change your mood, which is why you should follow these five influential women on Instagram. These boss ladies are ultra-inspiring, empowering, and motivating, and they never settle for ordinary!

Chinae told Women's Health Magazine that "women worry about how they’re viewed by other women. I wanted to be this voice that said, 'You’re safe here. You’re loved.' If I can get up every day and have a bunch of people feel a part of something, that’s my responsibility. It’s a big compliment to receive messages from my followers saying I’m like a friend."

Rupi Kaur, a poet, is changing the game at the age of 26. She is unquestionably Instagram's favorite poet, with verses on love, race, and womanhood. Her poems not only include beautiful illustrations, but they also address serious issues such as racism and sexual abuse. She writes easily digestible, topical poems that young people enjoy reading.

After skimming one of her two-line pieces in the morning, I spend the rest of the day analyzing her work. Kaur speaks bravely and beautifully from the perspective of a woman of color in a world where white males are regarded as superior. What she's doing is critical, and she's a total badass.

Jera is everything you'd want in a friend: hilarious, inspiring, and upbeat. We can't all be her best friend, so we'll have to settle for following her on Instagram.

As a former SoulCycle instructor who had to endure rejection from her first audition, get the job the second time around, train for ten weeks to become an official instructor, and then be told that she had to repeat the grueling training, she demonstrates a resilience that the majority of us do not possess.

However, after a year and a half of teaching, she shared with her followers that she felt it was time for her to move on from instructing and begin a new chapter in her life. That took a lot of guts, especially after she shared her path to becoming an instructor.

Lauren, in a nutshell, makes the Zero Waste Movement cool. The Package Free Shop's 27-year-old CEO can fit six years' worth of non-recyclable and non-compostable trash in a 16oz mason jar. Most of us use more plastic in a single day than that!

She is not only a powerful advocate for sustainability, but she is also an influential Instagrammer who appeals to people of all ages. Last summer, she fueled my desire to reduce my waste and assist my school in becoming more eco-friendly by reforming the cafeteria to have less plastic and more vegan food. I appreciate her upbeat, guilt-free approach to the subject, which encourages you to participate rather than unfollow and ignore the movement out of shame.

Ashley Bouder is not just any NYCB ballerina; she is a feminist and a #ballerinamom, as she refers to herself. Ashley candidly depicts the balancing act of motherhood, ballet, and feminist life. She is politically active and posts every Wednesday about a strong woman she admires, which I enjoy seeing and reading about because the information she provides is important and thorough.

Many ballerinas do not express themselves as strongly or as openly as Ashley. A recurring theme in this article, and in the women I admire in general, is their audacity. They are unapologetically vocal about their beliefs, even (or especially) if they are public figures.

Whether or not you choose to follow these badass women on Instagram, I hope you now have a better understanding of who they are and what amazing things they're doing for the world. It is extremely empowering to have role models at the touch of a button. I hope you, too, feel empowered.

9 Women Founders and Tech Entrepreneurs to Watch in 2022