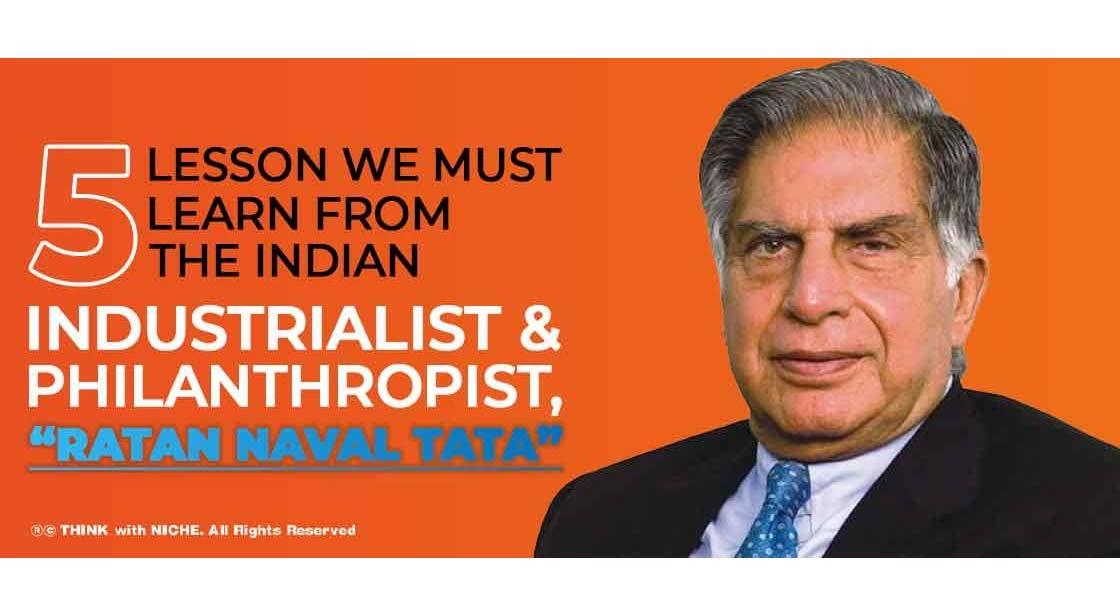 Many great leaders have led the Tata group, from Jamshed Ji Tata to Ratan Tata, and they have all kept certain norms, principles, and knowledge in mind, and these principles have made the Tata Group one of the most valuable brands in the world. Tata Group is the seventh-largest private limited firm in terms of employees, employing around 6 lakh 95 thousand individuals. Forbes ranks Tata Group 11th among the most respected firms, and Tata ranks 34th among the 500 most valued companies.#ThinkWithNiche

You may have heard that 90 percent of Indian startups fail within five years, with only 5% of businesses lasting ten years.As a result, you can see that just a few excellent organisations have reached the century mark.
Tata now manages more than 100 companies in more than 100 countries, and their goods and services are used in more than 150 countries. Some of its well-known brands include Tata Steel, Tata Sky, TCS 50, Tata Motors Tata Powers, Titan, Taj Hotel Group, Lakme, and others. Publicly traded companies have a combined capital of moreover $150 billion, according to figures from the Tata Group. sixty percent of the revenue comes from countries other than India, such as England and the United States. As a result, we'll read Ratan Tata's book and take notes on his life and business lessons.

Success In Listening- Few people are aware that Ratan Tata was initially offered a job by IBM, but he declined. He arrived at Tata Steel to work on floors and do menial jobs, just like the other Tata employees. In an interview, he stated that he spent the first eight years of his career in training programs on the shop floors of two to three companies, which he considered to be useless at the time and a waste of time, but later realized that those eight years of training and learning were the best investment of his life. According to Ratan Tata, studying and listening are two activities that will take you a long time in your life.

Emotions For Success- I'm sure you've heard of one of Ratan Tata's famous stories, but it's so good and teaches such a valuable life lesson that I'm going to tell it again. Ratan Tata faced a large loss when he produced the Tata Indica car, which did not sell well in the market. Experts and partners advised him to sell his company to mitigate the loss, which he reluctantly accepted. After making the decision to sell, he traveled to America to sell his company to Ford Company. The owner of the Ford company insulted Ratan Tata while he was at the conference at the time.

Teamwork- Ratan Tata believes that no single person can accomplish greatness; instead, greatness requires a strong team. Every employee that works with you is a member of your team, and you must look after them. Let's get down to business: Tata was the first corporation to implement an 8-hour workday in 1912, and Henry Ford followed suit in 1917. Tata began providing medical health benefits to its employees, which spurred many other firms throughout the world to follow suit. Remember that teamwork is critical to your success, and your teamwork will be at its best if you have a strong team, which you will have if you provide value to your team.

Believe In Your Decision- Many people questioned Ratan Tata's actions on numerous occasions. His judgments were questioned numerous times, for example, when he refused to sell his company to Ford, when he refused to sell enterprises that were losing money, and when he bought Tetley Tea for 450 million dollars. However, he was confident in his decisions, so he went ahead and did it without consulting anybody else, and Tata Tea became the world's second-largest tea company.

Take Chances- Ratan Tata is a philanthropist and a businessman. We, like other creators like Apple, Amazon, Facebook, Google, and others, must take risks in life, according to him. These companies are all part of the world's top corporations, but they all started in a small garage; they didn't have the backing of large corporations and didn't have a lot of capital to invest, but they still dominate the market. Why? Since they knew they had a chance, they showed their guts and made their vision a reality. As a result, if you want to progress in life, you must take risks, move outside of your comfort zone, be brave, and try new things.

Conclusion- Ratan Tata says that “if you are studying and if you are doing good in your life then it is your duty and responsibility to do for others you have to do something good for your country. You shouldn’t consider yourself successful by comparing to your wealth, you should feel successful when you go to bed and feel satisfied that yes I did something great, I brought some positive changes to the world, to the society, no matter how small the difference it, at least you did it.”