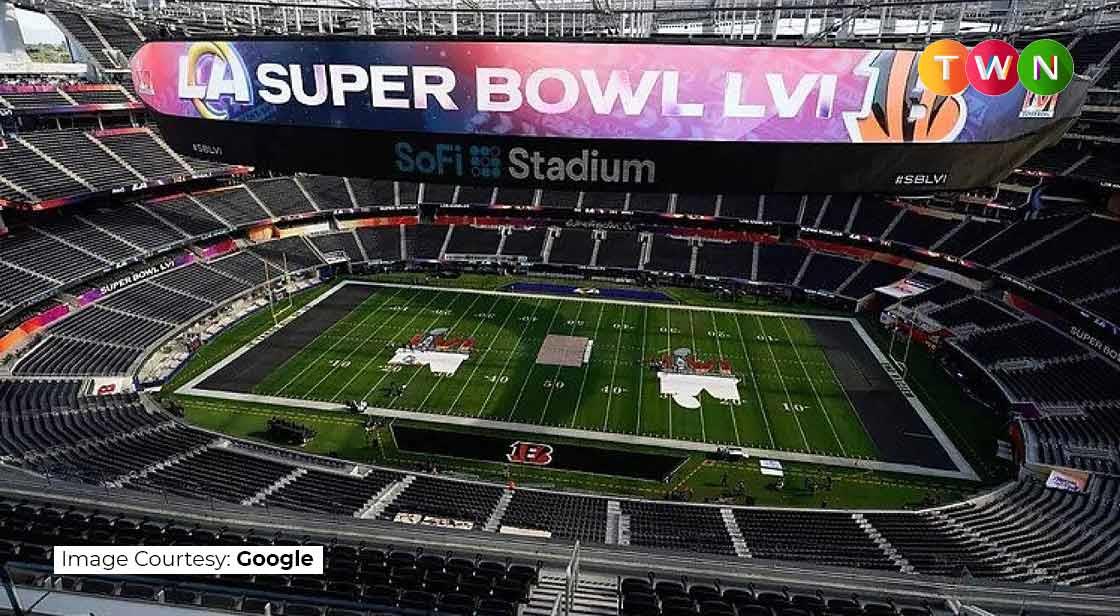 The Super Bowl 2022 ended, but the bowl fever refuses to leave the football fans! The Game, the Halftime Show excitement, and the euphoria speak volumes about the special place the Super Bowl Sunday enjoys in the hearts of the fans! So let us talk about Super Bowl Sunday and why is it such a spectacle! #TWN

Wooh! What a night it was! I bleed blue! I always do, but this Sunday with an added yellow streak, and why not? It was a super spectacle Sunday, after all! A Super Bowl Sunday has always been a treat for the fans, and this time it was no different! Be it the no-look pass of Matt Strafford or the breathtaking touchdowns of Cooper Kupp, the Los Angeles Rams were at their best! The Halftime Show by Dr.Dre and Snoop Dogg added glitter to the extravaganza! Los Angeles Rams and Cincinnati Bengal truly enthralled us with stunning performances. In the end, the team that kept nerves came victorious! Los Angeles Rams were the deserving winners! It had the exhilarating ecstasy that defines the Super Bowl Sunday!

The Super Bowl is Sunday!

The Super Bowl is one of the most exciting games in the history of American football (Rugby)! It is the Annual Playoff Championship Game of the National Football League (NFL). It was played in the SoFi Stadium, Inglewood, California, in the United States. In the beginning, the Super Bowl game was played in mid-January! From 2004 till 2021, the Super Bowl used to take place on the First Sunday of February. This year, in 2022, it took place on the Second Sunday that was the 13th of February! And what a game it was!

Many of us die-hard fans may be fantasizing about the Super Bowl! Well, the game came into being as a part of the Merger Agreement of 1966 between two football giants of America, the National Football League (NFL) and the American Football League (AFL). They decided that their best teams would compete for a Championship Title! The league officials searched for a very sensational title for the final Championship game. However, they did not have to search for long. Lamar Hunt, the owner of the Kansas City Chiefs came up with the unique title, Super Bowl.

Super Bowl! What a grand title for a sports event! Grand, yet amazing! But don’t you think it is a bowl of agony and ecstasy, excitement and high energy. Isn't it? The title has a long history behind it! In 1902, the Tournament of Roses (the Committee that produced the famous Rose Parade) decided to enhance the festivities by adding a football game. Stanford took on the University of Michigan in the first game, but it could not excite the fans. They discontinued it. In 1916, football returned, and with it returned the crowds! But the stadium was small and was unable to accommodate the entire gathering. The tournament President, William L. Leishman, saw the Yale bowl stadium; and envisioned a new stadium in the shape of a bowl. From here, the bowl became a standard title like the Rose Bowl in 1923 and Orange Bowl stadium!

In his book, The Super Bowl: An Official Retrospective, Lamar Hunt (who is also one of the founders of AFL) has thrown light on the origin of the title. He says, “There were three super balls given by my wife to my three children. It was a highly concentrated rubber ball manufactured by the Wham-O Company. You could bounce it off the concrete, and it would bounce over a house. The kids were always talking about these Super Balls. I think that is how the name came about!”

He further said, “In the fall of 1966, in one of our joint committee meetings between AFL and NFL, we were talking about where we were going to have this championship game. One of the people said, ‘which game are you talking about?’ I said, ‘Well, the last game after the last game, the championship game - The Super Bowl!’ The Members of the committee, three of us from the AFL and three from the NFL and (commissioner) Pete Rozelle, looked at me, and we all kind of smiled. Thereafter the committee began to refer to the game as Super Bowl. It was three or four years before the league adopted the name, but the media and public seized on it.”

The official merger between the leagues took place in 1970. The American Conference (AFC) and National Football Conference (NFC) were formed. The winner of each Conference would lock horns with each other in the game that was now officially titled 'The Super Bowl.'”

Cooper Douglas Kupp from the Los Angeles Rams of the NFL won the Most Valuable Player of the Year Award this year! He took eight marvelous catches, and a great jet sweeps the fourth touchdown. This Super Bowl LVI was his show altogether! He won the tastefully designed Pete Rozelle Trophy.

Hunt wanted to eliminate the confusion that could arise in the dates of the season and the final Championship game. The Super Bowl is the culmination of the Playoff Season that is played between the American Football League and National Football League. The Playoff Season is played between September and December, while the Super Bowl of the season is organized next year in February. For example, the season of 2018 got its winner in the Super Bowl 2019. It could understandably lead to confusion in counting. So this way, Hunt rendered a perfect way to identify a Super Bowl and gave it a new style!

The Super Bowl is not just a game of American Football. It is a grand show of glitz and game! The fans await the second Sunday of February, where there is the game, beer, chicken wings, burgers, adrenaline rush, and heartbreaks!

Emotions: It is a show of flowing emotions, where you have fans yelling and cheering for their favorites! More than 168 million people watched the Super Bowl LVI on Television! It is an unofficial holiday in America! The frenzy of the fans is at its highest.

Advertisements: The Super Bowl is also a jackpot for the advertisers where a thirty-second Ad costs no less than $5million.

Betting: We don't remember any other sport that enjoys better betting than Super Bowl. The bets include the jersey number of the first touchdown, the result of the toss, the first song in Halftime, etc.

Unpredictability: You cannot predict what will happen on a Super Bowl Sunday. In 2013, the game took place in Caesar’s Superdome in New Orleans. Baltimore Ravens and San Francisco 49ers participated in the face-off. Ravens were cruising to 22 points lead the lights went out. It was the rarest incident in the history of the Super Bowl and it took 30 minutes to normalize things!

Show boaters: The showboaters are quite common in the high-energy Super Bowl show. They attract your attention by crashing into the field behaving conspicuously. Sometimes, they leave a mark on the game by their antics!

The Super Bowl has always tried to enthrall the family together. So you may be a football fan, or you may not be a football fan, but all of you can enjoy the Super Bowl! The Halftime Show is such kind of a treat. This year the Super LVI was a star-studded extravaganza featuring the best of hip-hop and rap. The great Dr. Dre and Snoop Dogg gave mind-blowing performances. It was undoubtedly a super grand evening!

The Super Bowl Sunday is a memorable event of the year. The game and the show, of course, are immensely enjoyable. But when you laugh, scream and celebrate with the family, it takes the happiness into another zone! And now you regret that it is one year left for Super Bowl LVII! Till we meet again next year in Glendale Arizona! All the best! More power to our champs!