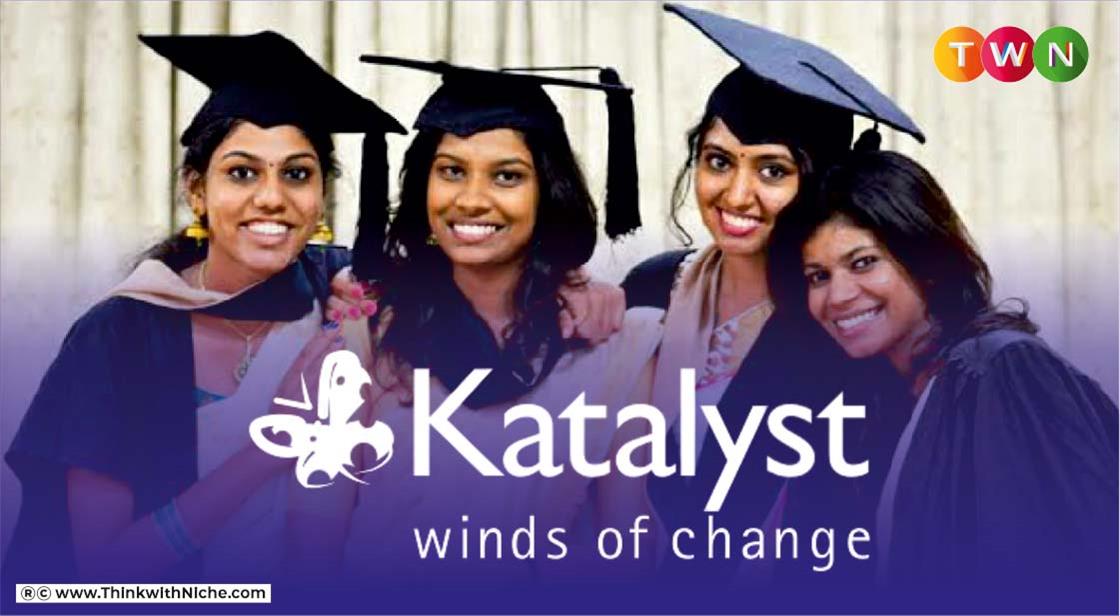 In 2021, India was ranked 131st among the world's countries in terms of human development, placing the country on the medium level. This placement is due to impending barriers that prevent girls from having equal access to academic opportunities in India. India's ranking would rise if more money was spent on girls' education, which would help to alleviate some of the country's poverty. In this article, I will talk about the urgency of efforts to transform the Indian education ecosystem for young girls and women and the contribution of Katalyst in making this vision come true! #TWN

India is still long away from achieving gender equality, as evidenced by its skewed sex ratio of 940 females per 1000 males. In India, a girl child is frequently viewed as a liability, a 'burden' to be passed down. Given the pervasive influence of patriarchal values, many girls are subjected to gender inequality, gender stereotypes and are treated as second-class citizens when compared to boys.

Regardless of how talented and ambitious she is, the girl child frequently gets the short end of the stick. Many girls are not sent to school and are kept at home because they are afraid of exploitation and abuse. Even if she is not married off, the young girl is denied a deserving education, quality healthcare, employment opportunities, and equal rights as a boy. While some girls manage to 'escape' from their shackles and try to build a better future for themselves, the majority accept their fate.

How can we expect India to progress when half of its population is discriminated against? To find solutions, we must first understand the major challenges that a girl child faces.

Survival as the First Challenge

While there are laws prohibiting a fetus's sex determination and selective abortion, this practice continues in the shadows. It has a negative impact not only on the number of girls born but also on the mother's health and safety. Consecutive pregnancies with the hope of having boy harm both physical and mental health because the woman is blamed for the baby's gender. Stricter enforcement and monitoring of laws, as well as increased awareness, are required to help the girl child survive.

According to recent national data, the dropout rate for girls at the elementary level is 4.10 percent, rising to 16.88 percent at the secondary level, with figures significantly higher for girls from vulnerable groups (19.05 percent for SC and 24.4 percent for ST groups) (U-DISE 2015-16). The retention rate for girls in elementary school is 70.6 percent, but it drops to 55.5 percent in secondary school (U-DISE 2016-17). Due to existing attitudes toward girls' education, safety concerns, distance between home and school, a lack of affordable sanitary napkins, a lack of separate and functional toilets, and poor school infrastructure, many teenage girls attend school irregularly or drop out before completing their education. In India, only one out of every three girls completes an age-appropriate school education (U-DISE 2016-17).

8.9 million of the 12.15 million children married in India are girls, and married girls outnumber married boys three to one. According to the 2011 Census, approximately 3 million children under the age of 14 are married. Rural girls account for 55% of married children. Child marriage deprives girls of their childhood by forcing them to take on adult roles for which they are unprepared, such as managing households, bearing children, making decisions, and so on. It not only interferes with her education but also pushes young girls into early pregnancy, which harms both the health and nutrition of the adolescent mother and her child.

A girl child is an easy target and is frequently the victim of abuse and domestic violence, which often goes unreported. Parents in rural areas are hesitant to send their daughters to school for fear of their safety. According to the most recent data from the National Crime Records Bureau, kidnapping, abduction, and sexual offenses against children were among the top two crimes committed against children. Girls under the age of 18 made up 28 percent of all rape victims, and 70 percent of all children who went missing in 2018 were girls.

Several teenage girls of menstrual age fall behind in school because of extreme taboos, a lack of affordable sanitary napkins, a lack of decent functioning toilets, and inadequate school infrastructure.

Why is the Education of the Girl Child Important?

Many people in our country are unaware of how education for girls can change lives for the better. It is a sad state of affairs when people from all socioeconomic backgrounds believe that investing in the education of a girl child is a waste of money. Even more disheartening is the fact that they would rather justify spending on their daughter's marriage expenses or dowry than on her education. Early education can play an important role in guiding society forward. When a girl receives an education, she gains power. She can make her own decisions, raise the standard of living for her family and children, create more job opportunities, and reform society as a whole. As a result, a shift in attitudes toward girl child education in India is urgently needed. Every girl child deserves to be treated with love and respect.

The government has made consistent efforts, through various schemes and programs, to elevate the status of the girl child in society and to incentivize her education. These have undoubtedly aided girls' education to some extent, but much more needs to be done to ensure that girls are treated equally to boys.

How Katalyst is Making a Difference!

Katalyst was founded a decade ago to liberate women through professional education. The initiative definitively prepares young women for leadership roles, thereby expanding India Inc.'s talent pool and bridging the gender gap. Katalyst works to achieve this goal by combining a variety of innovative development interventions, including our 600-hour proprietary and scientifically researched curriculum.

They also provide one-on-one mentorship, access to best-in-class technology, internship assistance, and world-class industry exposure and corporate interactions during their four years in the program. Katalyst was founded in 2007 by ten young women and now has chapters in Mumbai, Pune, Bangalore, and Delhi. It has impacted the lives of over 1200 girls, with 500 currently enrolled in the program. Katalyst alumni now hold senior positions in prestigious multinational corporations and large Indian corporations, both in India and abroad, as well as in the Civil and Administrative Services.

Every noble cause begins with a vision! Katalyst envisions accelerating young women's growth in professional education through developmental interventions and an enabling environment that fosters self-belief and leadership.

Their Vision: Empowering Women for Equality in Opportunity and Leadership!

Investing in education is the most efficient way to alleviate poverty. Investing in Secondary School Education pays off handsomely. Women account for one-half of the world's potential talent pool. As a result, a country's competitiveness over time is heavily influenced by whether and how it educates and employs its female talent. Women's educational achievements can have repercussions within families and across generations. As a result, Katalyst is focusing on girls' tertiary education.

These "Katalysts" will then catalyze positive change and influence society, resulting in a ripple effect and economic and social empowerment.

Primary Objectives of the Program

The Program assists the girl throughout her undergraduate studies.

Katalyst is Making an Impact

Starting Salary Offered to Katalysts is 43% Higher than Others!

Among engineering graduates, the mean salary expectation is INR 4.2 lakhs for Tier 1 cities. The current average salary offered to Katalysts is INR 7 lakhs.

The median salary offered to Katalysts is 43% higher at INR 5 lakhs as compared to INR 3.5 lakhs offered to the control cohort.

The average change in income in Katalysts' families is 16% higher.

In 2019, only 52% of engineering graduates who completed their course were placed. The placement rate for Katalyst for the year 2020 was 85%.

100% of Katalysts were placed within 3 months of graduation, compared to only 88% in the control cohort. Among Katalysts who are currently undergoing their graduation course (final year), 38% have already been placed.

"Placement and Compensation Source by: Katalystindia"

69% Of Katalysts Outperform their Peers, According to Employers!

Katalyst Interventions are in alignment with the employer's demands. Technical skills, problem-solving, and communication skills are the top 3 priorities in terms of candidates' skill requirements for employers.

94% of Katalysts have at the least met employer expectations in all aspects, with the majority of 63% exceeding the same.

Katalysts get promoted to mid-management positions within 2 years. 22% of Katalysts are working in mid and senior managerial roles, which is significantly higher than the control cohort of only 6%.

"Placement and Compensation Source by: Katalystindia"

100% of Katalysts reported being aware of skill-relevant job opportunities compared to only 47% among the control cohort.

94% of Katalysts reported high confidence in their English communication.

The managerial and leadership skills enabled the students to take the lead in college events. About 67% of Katalysts led events as coordinators, and 36% led various college activity clubs.

"Self-Confidence and Awareness Source by: Katalystindia"

100% Of Katalysts Receive Greater Respect in their Community!

100% of Katalysts reported receiving greater respect in their community. Their family supports their career choice and is positive about the future. They also serve as role models to their siblings and peers and help make career-related decisions.

89% of Katalysts reported being able to contribute financially to their households after getting the job, 6.5% higher than the control cohort.

100% of Katalysts take part in financial decisions at home, 6.2% higher than the control cohort.

ThinkWithNiche lauds the efforts of Katalyst in bringing about the ever-essential reform in the education of young girls and women. The journey is still long, but with courage and dedication that Katalyst has shown over the years, it isn’t that far!

If you wish to help their cause, here’s the link to make your contribution!

If you liked reading this article, I have two more for you. Click on the link below to explore!