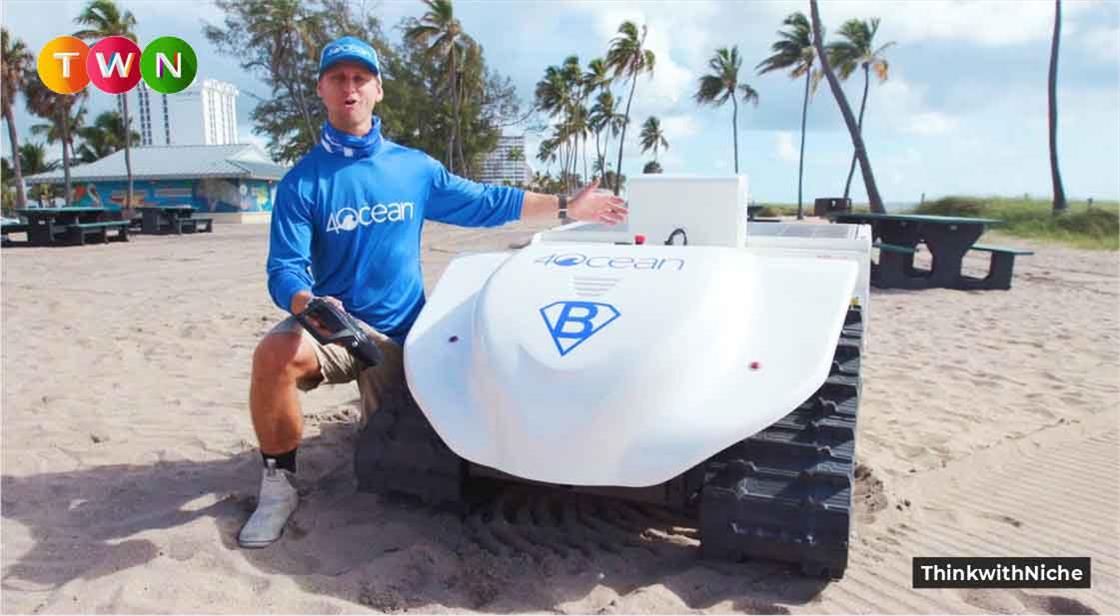 It takes a lot of effort to keep beaches clean. Even a heroic cleaning crew can miss microscopic fragments of plastic or "forever waste," as I like to call it. These plastic shards can continue to break down into smaller pieces if left on the beach, making their way into the guts of seabirds, turtles, fish, and even human organs.

It is when BeBot comes into play. Poralu Marine, a marine manufacturer, created this electric robot. Let's know more about BeBot. #TWN

BeBot is a remote-controlled robot designed to help with the enormous effort of keeping beaches clean.

It takes a lot of effort to keep beaches clean. Even a heroic cleaning crew can miss microscopic fragments of plastic or "forever waste," as I like to call it. These plastic shards can continue to break down into smaller pieces if left on the beach, making their way into the guts of seabirds, turtles, fish, and even human organs.

It is when BeBot comes into play. Poralu Marine, a marine manufacturer, created this electric robot. The first one to be deployed on American beaches was purchased by the marine cleanup company 4ocean and is located in Florida.

BeBot is now patrolling South Florida beaches, but another BeBot is on its way to Hawaii to "assist local partners and existing cleanup operations on the island of Oahu." BeBot's main aim, according to 4ocean, is to clean and restore the world's beaches while protecting the natural beach environment.

A battery powers BeBot, with a solar panel providing power for additional accessories. Its continuous-track propulsion system, which resembles that of a tank, allows it to glide over the sand with ease. Its built-in sifter filters out plastic and other trash as it prowls the beach, leaving a clean strip of sand in its wake.

BeBot cleans with the help of a remote-controlled operator, unlike a Roomba. The decision not to make the robot autonomous was made due to safety concerns about beach-going families, according to its creators (both human and sea turtle). An emergency stop button is present on both the BeBot and its remote control.

"Depending on the geography, the BeBot can clean up to 3,000m2 of beach per hour," claims 4ocean. Seven basketball courts are equal to 3,000m2.

The BeBot is completely electric, so it doesn't require any fuel and isn't as noisy as a regular motor, which is ideal for individuals looking to unwind on the beach. There are no toxic gases, liquid pollutants, or diesel fumes because it runs on a mix of solar and battery power.

"Many coastal properties use heavy-duty equipment like tractors to rake the sand or manual sifters that are labor expensive, less efficient, cause beach erosion, and automatically crush wildlife and plants present in the sand to help keep beaches clean," according to 4ocean's website. "Yet these contraptions exist," says the narrator.

However, this is not the case with the BeBot. According to 4ocean, it can function at depths of up to 10cm and catches plastic waste as small as 1cm2. It can pick up cigarette butts, food wrappers, bottle caps, and other sand-hidden plastic debris. It can also sift through the sand, scrape algae, lift and carry bigger items like beach chairs, and level sand spots and fields that are otherwise uneven.

BeBot's developers are presently targeting hotels, resorts, and municipalities as possible customers, and there are about 30 of them.

Poralu Marine's environmental cleanup robot, BeBot, isn't the only one on the team. It's part of the Searial Cleaners family, which also includes the floating Pixie Drone (which collects both solid and liquid waste) and the Invisibubble (perforated hoses that use a steady stream of bubbles to guide floating trash into collection points).

Of course, BeBot and the Searial Cleaners cannot fix our pollution problem on their own, but they can provide useful information about the types of rubbish that are most common on a certain beach, as well as raise awareness about the importance of not leaving trash on our beaches in the first place.

Wouldn't it be lovely to come home every day to a clean floor? The truth is that you can, and it might not be as expensive as you think. Robot vacuums have been around for more than two decades, and technology has advanced significantly since the original Roomba was introduced in 2002.

There are a variety of robot vacuums available these days, ranging from simple, budget-friendly ones that handle basic vacuuming to more expensive high-end models with laser navigation and mopping features. With so many models on the market, there are lots of bargains to be had. You can save hundreds on one of these helpful cleaning tools with a little digging, no matter what model you're shopping for. The suction of a robot vacuum is measured in pascals or Pa.

BeBot is one of a slew of cleaning robots working to make the world a better place. There's also the Clearbot robot, which Razer assisted in developing to clear up ocean debris. Read about this new reef discovered in Australia that is taller than the Empire State Building for more information about the ocean and the world's beaches, and then read about this bionic moon jellyfish produced by scientists for more information about the ocean and the world's beaches. It is not entirely automated like iRobot's Roomba but rather is operated remotely by someone. It is for safety considerations, according to Poralu Marine, because the machine will likely be in close proximity to beachgoers. It can be controlled remotely from up to 300 meters away, making it appear autonomous to people who are close by.