A Look At The Most Expensive Cars In The World – Who Owns Them? 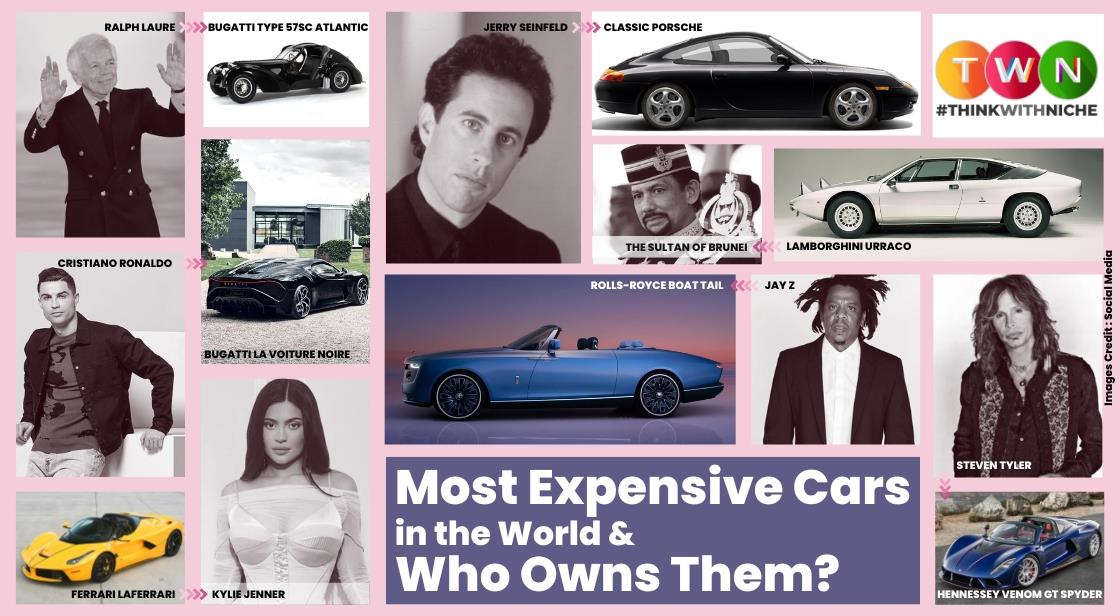 Everyone loves to know who owns the most expensive car in the world. It's a question that has been asked for many years and the answer is always changing.

Since the start of the automobile revolution, expensive and opulent vehicles have been linked to fame and wealth. Hollywood celebrities, well-known athletes, monarchs, and heads of state all have amazing car collections, which are a surefire indication of someone's discerning taste in high-end cars.

The owner's car collection is occasionally closely related to their wealth and is unaffected by the latest models, making it a reliable status symbol. Who owns the most expensive cars in the world is the query that always piques interest, though.

Today, we'll provide an answer to that query and A Look at the Most Expensive Cars in the World – Who Owns Them?

The world's most well-known and wealthy individuals frequently purchase the priciest vehicles. Because their value increases over time, the wealthy view limited editions as investments. In order to sell them at high prices at auction. Even after a car is produced, many factors still influence its price.

History, rarity, speed, comfort, tech integration, and brand recognition and popularity are all included. Once a famous person around the globe has a car, he also develops into a huge status symbol.

The world's most expensive Car, along with their owners, are listed here.

A Look at the Most Expensive Cars in the World – Who Owns Them?

Ralph Lifshitz, best known by his stage name Ralph Lauren, is a successful businessman, philanthropist, and fashion designer from the United States. The Ralph Lauren Corporation, a multimillion-dollar, multinational company, is his most well-known achievement. The 82-year-old fashion tycoon is renowned for his collection of vintage Cars, some of which have been on exhibit at museums.

Only two 57SC Atlantics remain; one is owned by Lauren and the other is housed at the Mullin Automotive Museum in Los Angeles. The type 57 S.C. Atlantic coupé, which is now 80 years old and considered one of the most valuable cars in the world due to its rarity, elegance, luxury, and sportiness.

The black 1930s 57SC Atlantic owned by the fashion mogul is regarded as the first supercar or street-legal high-performance sports automobile. Its eye-catching kidney-shaped doors, riveted fins, and teardrop-shaped body are cool to look at.

After comedy, of course, Jerry Seinfeld was allowed to indulge in his greatest interest as one of TV's biggest stars. Jerry purchased vintage Porsches at the height of Seinfeld's fame before they became the in-demand property they are now. He has acquired a collection of rare, racing Porsches over the years (along with a few other vehicles), and at one point even had early 356s and Steve McQueen's old Porsche 917. Although his collection is not as large as some of his contemporaries, the Porsche motif, painstaking research into the past of each vehicle, and impeccable condition of the collection give it a value of almost $100 million. The most expensive car is a 1955 550 RS that closely resembles the one James Dean owned and died in.

Think about having a car fleet of 7,000 cars. Where will you put them all in the parking? Of course, it is possible if you are a billionaire, and no one understands this better than the 29th Sultan of Brunei, one of the most well-known vehicle collectors in the world.

His enormous car collection is believed to be worth $5 billion. The Sultan is currently the monarch with the second-longest reign in world, after Queen Elizabeth II. You won't typically see his cars, though, unless you are a friend or a resident of this small, oil-rich state on the island of Borneo.

Due to his extensive fortune and passion for cars, Sultan of Brunei is able to collect models that are not only expensive but also rare. It is believed that the king has more than 600 Rolls Royces, 450 Ferraris, and more than 380 Bentleys. The Sultan also owns a large collection of vintage cars, among them the Lamborghini Urraco. There were only 791 units produced during the model's lifetime, which ran from 1972 to 1979. Some of his automobiles are made to order. The net worth of Sultan of Brune is $30 billion.

Is Jay Z the owner of the highest-priced car? Rap Favourites tweeted on May 29, 2021, that Jay Z and Beyonce own the most expensive automobile in the world. They purchased a $28.4 million Rolls Royce Boat Tail that was specially created for the couple. Since cars occasionally lose value and there is always something hotter coming along, it is questionable if they currently maintain the position. One of just three, the Rolls Royce is blue and covered in sparkling crystals.

Jay-Z, real name Shawn Corey Carter, is an American rapper, songwriter, entrepreneur, media mogul, and record producer. One of the most significant hip-hop singers in history, he is regarded as such. Jay-Z owns a large collection of high-end cars, which includes an $8 million Mercedes-Benz Maybach Exelero.

In 2021, the custom-built Rolls-Royce Boat Tail will surpass all other automobiles in price. Rolls-Royce succeeded in introducing its Coachbuild service to its high-end premium customers. There are only three Boat Tail cars, so the car will be a valuable collectible. The Rolls-Royce Phantom, Cullinan, and Ghost all have engines with 6.75 litres of dual turbocharged V12 displacement in them. Three of his cars are unique and cannot be found anywhere else in the world. Jay Z and Beyonce have a $1.35 billion joint net worth.

Sheikh Sultan bin Zayed bin Sultan Al Nahyan was raised in a world of wealth and expensive cars as a member of the ruling family of Dubai. But he didn't begin amassing his extraordinary collection until 2004, and it quickly rose to the top of the list of supercar collections worldwide. Its collection of 32 vehicles, while less than that of other collectors, is nonetheless filled with excellent supercars like the Lamborghini Reventón, Bugatti EB110, and Mercedes CLK GTR Roadster. Although the Sheik was a devoted fan of Bugatti, he couldn't live with just one Veyron. As a result, he acquired five copies with various specifications, making him the most well-known Veyron collector in the world.

Cristiano Ronaldo, a player for Manchester United and Portugal's national team, bought the world's most expensive car, the Bugatti La Voiture Noire, in 2019. Every part of the body is hand-made out of carbon fibre. To commemorate the 110th anniversary of the company's founding, a one-of-a-kind vehicle called the Bugatti La Voiture Noire was created. This year, Ronaldo got the car.

The black car has echoes of the renowned Bugatti Type 57 S.C. Atlantic built by Jean Bugatti, the eldest son of Bugatti, in the late 1930s. The quad-turbo 8.0-liter W16 engine of La Voiture Noire is paired with a 7-speed dual-clutch transmission. It has a top speed of 249 mph, 1500 HP, and 1180 lb-ft of torque. It can go from 0 to 60 mph in 2.4 seconds. The car has six exhaust pipes and LED lettering.

American professional boxing promoter and hall of famer Floyd Mayweather retired as the undisputed champion. 50 victories, 27 knockouts, and 0 losses make up his record. He competed from 1996 to 2015, and in 2017, he made a comeback.

Only two Koenigsegg CCXR Trevita vehicles were produced by Koenigsegg Automotive. It is renowned for its distinctive Diamond Weave finish and is one of the most rare concept cars. The car's 4.7-liter twin-supercharged gasoline/ethanol engine produces 1,004 HP and 796 lb-ft of torque. It has a top speed of 254 mph and can accelerate from 0 to 60 mph in 2.9 seconds.

An American model, social media star, and entrepreneur, Kylie Kristen Jenner. She founded and is the owner of Kylie Cosmetics. From 2007 until 2021, she gained notoriety on the reality television programme Keeping Up with the Kardashians.

A 6.3 Liter V12 engine and an electric motor combine to produce 949 HP and 663 lb-ft of torque in the LaFerrari hybrid car. The two-door, RWD Coupé with two seats accelerates from 0 to 124 mph in under seven seconds and has a top speed of 217 mph. It includes a seven-speed automatic transmission.

Rarely does one have the opportunity to receive a behind-the-scenes look at one of the most exclusive car collections in the world. The majority of them are locked up in secure underground garages and off-limits. However, you may view the majority of Prince Rainier III of Monaco's collection for just €10. It is one of the top attractions in this distinguished Mediterranean principality and is open to the general public as a museum in Monte Carlo. Given that one of the most thrilling F1 races and the fast-paced Monte Carlo Rally has been placed on its streets since the early 1920s, Monaco has a long history with cars. Therefore, it is not surprising that the royal family's collection of cars includes racing Ferraris, rally Lancia Deltas, and Grace Kelly's Mercedes 300 SL.

One of the most costly sports cars in the United States is the Hennessey Venom GT. Its chassis was developed from that of the Lotus Elise. The Venom GT convertible owned by The Rockstar is a custom-built Hennessey GT. Similar to the Venom G.T., the vehicle has a 7.0-liter twin-turbocharged engine paired with a Ricardo 6-Speed manual transmission. The drivetrain produces 1451 HP and has a top speed of 268 mph. It can accelerate the vehicle from 0 to 60 in 2.4 seconds.