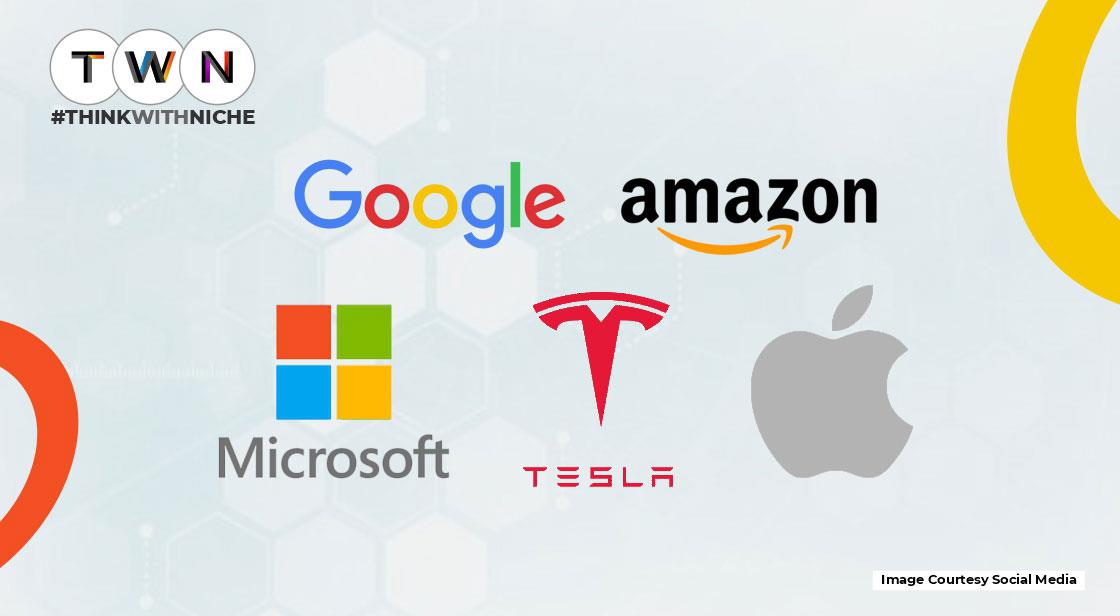 Although power can take many different forms, it ultimately comes down to having influence—over others, resources, and the global conversation. Today America is the country with the largest economy in the world. America has become the world's largest economy as well as the biggest power. According to the report, while the effectiveness of the top Asian countries has decreased, the "United States of America." has been able to increase its status on the basis of a strong economy. With this, it remains ahead in the list of most influential countries. American companies are the biggest contributor to America's strong economy and because of these companies, America has its own identity in the whole world. Today, through this article, we will know about America's powerful and 5 most famous companies.

The founders of Microsoft company are Bill Gates and Paul Allen. The company was started by them. Due to these two, Microsoft has gained a lot of fame in the technology world. Microsoft is the world's largest software company and Microsoft is the largest traded company in the US stock market.

Today Microsoft company's products are very popular and the biggest thing is Microsoft's operating system Microsoft Windows is the most used in today's time. The CEO of Microsoft is Satya Nadella, who is very popular among the people. In the year 2016, Microsoft has become the world's largest software maker and since then till date, it is just achieving success. MS Word is the most widely used word processing software. It is used in schools, colleges, offices, and many other places. The vast majority of the world's population today uses software from Microsoft such as Windows, Microsoft Office, and Outlook. The first version of MS word came in 1988 and at that time its name was MS work or Microsoft work. Since then many versions of MS word have come. Microsoft had a market cap of $2.527 trillion in the US stock market on 4 November 2020. There are 1.40 lakh regular employees in this company.

Apple is a major hardware and software company known for its range of personal computers, the iPod, and its products. Apple Inc. is an American multinational company that manufactures electronic products such as mobiles, laptops, computers, software, etc. Talking about the headquarters of the company, it is headquartered in Cupertino, California, United States. Apple company is famous not only in America but all over the world. It is one of the largest companies in America. Apple company was established on 1 April 1976.

As soon as we hear the name of the Apple company, the first thing that comes to our mind is the iPhone. Because this is a phone that everyone wants to buy, that means, about 90% of the people in the world want to buy Apple's iPhone. Apple Inc. Many products are made by the company, but the one which is very popular is the mobile iPhone and Laptop of this company, both of them are very popular products. Talking about the price, the price of Apple's products is much higher than that of other companies. Their prices are high but their features are much better than other companies. Due to its good quality and good features, Apple company's iPhone sells the most and most of the mobiles of Apple company are used all over the world. Apple Inc. The owner of the company is Steve Jobs, who was born on 24 February 1955 in San Francisco, California, United States, Steve is an American citizen and Steve's full name is Steven Paul Jobs. The Vanguard Group, Inc. has the largest share in the company's shareholders. and Warren Buffett's company Berkshire Hathaway, Inc. are near. According to the data of 4 November 2020, Apple's market cap is $2.62 trillion and the credit for bringing this company to this position goes to Steve Jobs. Today the company has 137,000 employees.

Tesla is an American electric car manufacturer. This company works on clean energy. The headquarter of this company is in Palo Alto, California, United States. Tesla company was founded on 1 July 2003. The company was founded by Martin Eberhard and Mark Tarpenning. The company's aim was to commercialize the use of electric vehicles and drive people towards the green path. The year 2021 has been great for Tesla company, due to the great jump in the company's market cap, it became one of the top-5 companies in America. This company is world famous for making the best electronic cars. This company has made its place in the list of the largest companies in the world. Tesla company currently manufactures solar panels, solar roof tiles along with electric cars. The company is also known for its expertise in solar panels and lithium-ion battery energy storage. The name of the owner of Tesla company is Elon Musk. Elon Musk is the owner as well as the CEO of the Tesla company. The richest person in the world  Elon Musk is the owner of the company. Tesla's business is spread in many countries of the world. Talking about the net worth of Elon Musk, his net worth is more than $293 billion. Elon Musk is a businessman living in America. As a battery company, Tesla is best known for its electric cars. Tesla has a market cap of $1.141 trillion. Today Tesla Motors is one of the biggest names in the automobile industry.

Google is an American company and it is the largest search engine in the world. Google was founded in 1998 by Larry Page and Sergey Brin. Larry Page and Sergey Brin introduced the Google search engine as a project in 1996 during their Ph.D. studies at Stanford University, and today it has become the largest search engine in the world. Google's headquarters is located in Amphitheater Parkway, Mountain View, California, US. Without Google our Smartphone and we ourselves are incomplete. Google mostly makes Internet-related services and products such as online advertising technology, cloud computing, hardware, software and search engines, in which it is most famous. Google currently has around 119,000 employees. Google is the largest search engine in the world. According to the data of the year 2020-21, more than 90% of the internet searches in the whole world are done in Google alone and in India this figure is 98%. At present, the market cap of this company is $1.94 trillion. Google operates more than one million servers and stores more than 10 billion search requests and petabytes of user-related information (data) from its data centers around the world. Google ranks very high among the most valuable brands in the world. The CEO of Google is Sundar Pichai. Sundar Pichai was instrumental in developing Google Toolbar and Chrome. Within a few years, Google Chrome became the most popular Internet browser in the world. Talking about the share, Larry Page currently has the most shares. He holds 19.9 million Class A shares and 20 million Class C shares.

Today, whenever it comes to online shopping, the name of Amazon comes first because Amazon is the most favorite online shopping website of people all over the world. Amazon is an American multinational technology company and an e-commerce website. People from all over the world do online shopping here. Amazon is a reliable company in terms of online shopping. The headquarter of Amazon is located in the company. This company is famous all over the world due to its excellent services. Amazon currently has a market cap of $1.806 trillion. This company started with online book sales and today the company is selling every item all over the world. Also, there are many people around the world who grow their business by selling their goods in Amazon. Amazon also gives people the opportunity to do affiliate marketing, in which people can earn up to lakhs of rupees by suggesting the goods sold on Amazon in their blogs and YouTube videos. Meaning it is an online store where any person can sell his goods and anyone can buy those goods. The owner of Amazon is Jeff Bezos. He is counted among the richest men in the world. Jeff Bezos is the founder and CEO of Amazon. Jeff Bezos started this website on July 5, 1994 under the name of Amazon.in. Then he slowly started selling many other things like electronic goods, home goods, furniture, clothes, etc. on this website and today there are about 8 lakh full-time employees in Amazon. Jeff Bezos gave such good service to the people that today people have full faith in online shopping.