Want to Invest in Toast IPO? 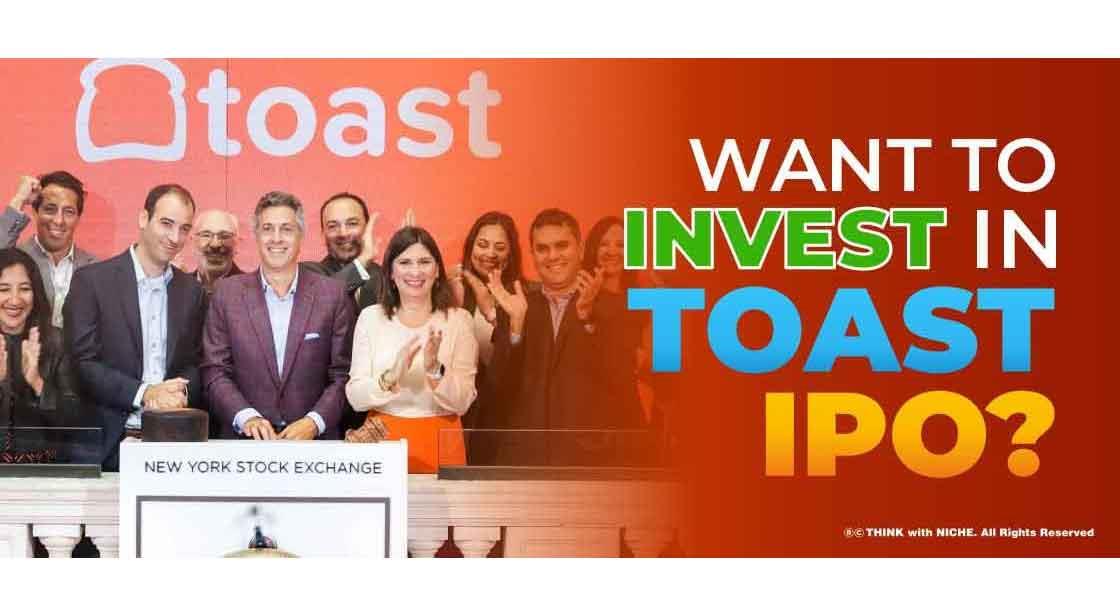 Toast Inc recently entered an IPO. Investors must be ready to get the shares. Before you invest, learn about Toast Inc. and the IPO. #ThinkWithNiche

A bread toast tastes way better than a loaf of regular bread. We all love when we toast the bread. You can feel the same way after investing in Toast inc. and its IPO. Toast company recently priced its IPO, and if you are an investor or planning to invest, give it a try. Let’s go through this journey of learning about Toast inc. and its newly priced IPO. We’ll talk about some key points, and you can make your decision of investing, or you’ll pass this IPO.

Every investment-related article will tell you to be careful and aware of the market before investing your money. We also say the same for you. Being financially stable is what you must’ve dreamt of. To do that, investing your money will get you generous returns. When a new IPO is launched into the market, one should learn everything about that IPO and then only subscribe for the share in it. With all this information delivered, let’s know about Toast IPO.

Toast Inc. is a food-centered software company. The company is a cloud-based software company that is situated in Boston. The idea of the company is to make a restaurant management system. Toast makes a point-of-sale system for the restaurants that runs on the Android operating system. In 2012, three MIT students laid the foundation of Toast. Jonathan Grimm, Aman Narang, and Steve Fredette met each other as employees in Endeca and later left it when Endeca was acquired by Oracle in 2011. They together made an app that was solely focused on mobile payments, promotions, customer loyalty, and other social aspects, which they can integrate with systems run by the restaurants (POS system). Toast sells certain products to restaurants that make restaurants run smoothly with the ordering system and payments they can access online. In short, Toast allows restaurant owners to focus on food rather than logistics, order entry, online ordering, and other stuff. Toast takes care of all those things, freeing the owner to work and focus on food.

After being founded in 2011, Toast did a lot to get good funding.

Let’s talk about some numbers

The revenue earned by Toast comes in many ways:

In the first few months of 2021, Toast generated $703.7 million in revenue, which was almost 105% per year. This level of growth is impressive in many aspects. One main point to consider is that the growth we are observing now was recorded after the first half of the pandemic when most of the restaurants were closed or running at half capacity. Investors kept an eye on how Toast managed to get the revenue generated when the pandemic was coming under control. Toast did incredible work in these years after 2019.

Several issues needed addressing that made Toast incur some losses. Hardware sales and the services (professional services) were the ones to blame for those losses dealt by Toast. They cost more than the revenue they can generate.

The hype around the Toast IPO

We all know how the hype develops when a company prepares itself to enter the market, the investment banks price the stocks of the company when they underwrite the IPO. The financials of the company, its comparisons, and share demands can impact the IPO prices at the time when a company is all set to go public. All this creates hype that can either make or break the IPO.

With Toast, this hype did the same thing. When the news of Toast IPO came, the company got a lot of attention. Due to this, the price of initial offering price went up. As a result, the deal exceeded the initial price of 30 dollars to 33 dollars and ultimately priced at 40 dollars. This price went up in September up to 65.25 dollars.

Now it’s up to you if you want to subscribe to Toast IPO after analyzing the current situation and prices of the shares. Toast presents itself as a Saas (software as a service) company, but the high prices of the shares somewhat tarnish the image it had built. Many similar businesses have IPO prices lower than that of Toast, and the gross profit margin is also higher (around 54%). IPOs are not child’s pay, so invest wisely.