Sanctions On Russia, Impact On The World 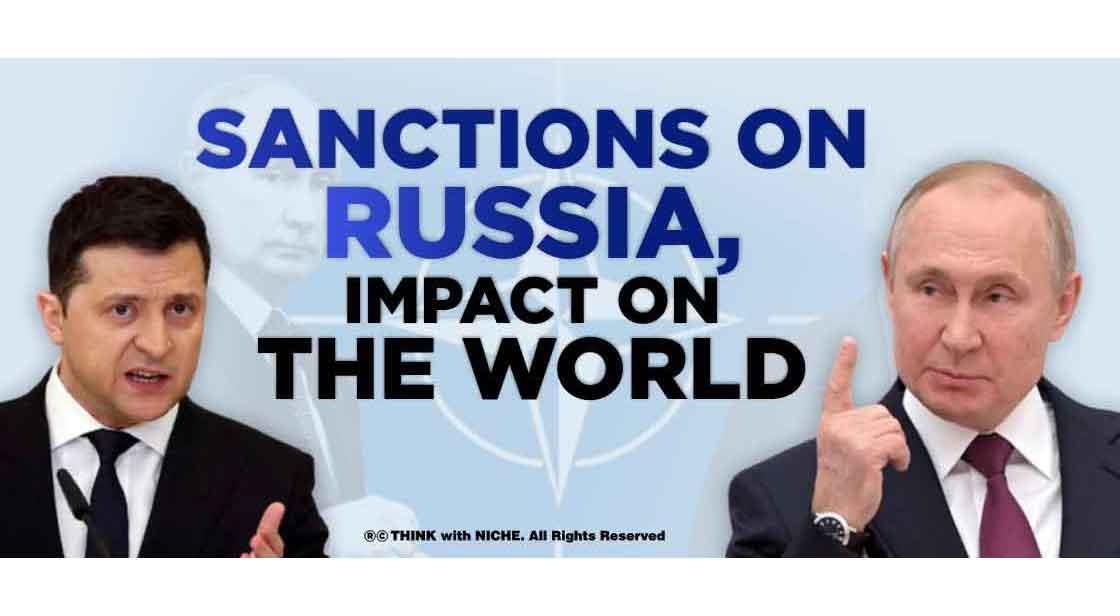 ThinkWithNiche writes about the impact of global sanctions on Russia during the Ongoing geopolitical crisis as well as the impact of the same on the global economy! #TWN

The global economic outlook has deteriorated in recent days as troops clashed in Ukraine, and surprisingly powerful financial sanctions rocked Russia's economy, threatening to further fuel global inflation. On Monday, the price of oil, natural gas, and other necessities skyrocketed. At the same time, like the US, Europe, and their allies tightened the clamps on Russia's financial operations and froze hundreds of billions of dollars in the central bank's assets held abroad, the strain on supply lines, which were still reeling from the pandemic, grew. While Russia may have expected the measures, it is possible that the country did not expect so much action to be done so quickly. The United States and its European allies have hampered Russia's ability to transact in foreign currencies such as dollars and Euros, frozen the assets of various Russian banks, and disconnected Russia's banks from the worldwide SWIFT messaging system. Japan stated it would join the freezing of Russian leaders' and banks' assets, as well as the freezing of Russia's foreign reserves in yen. Even Switzerland, which has a long history of neutrality in conflicts, has consented to join the sanctions campaign.

As a result, Russia has taken steps to strengthen its economy and finances. Its central bank increased its interest rate by a factor of two in a bid to stabilize the ruble after it fell in value against the dollar. The government, which has been sanctioned since it invaded Crimea in 2014, has over $600 billion in foreign reserves, which include foreign currency and gold. It accumulated those reserves with the express purpose of fending off sanctions. A lot of that money isn't in Russia at all, but rather on paper in banks all over the world. As a result, the country may have difficulty accessing that money. Sanctions are sure to wreak havoc on the Russian government, as well as the Russian people. Despite its massive energy exports, Russia has long been a modest factor in the global economy, accounting for only 1.7 percent of global output. In recent years, President Vladimir V. Putin has taken steps to further insulate it, building up a reserve of foreign exchange reserves, decreasing national debt, and even prohibiting cheese and other European food imports.

However, while the US President has disobeyed a slew of international conventions, he cannot ignore a modern and massive financial system mostly controlled by governments and bankers outside his country. He has assembled tens of thousands of troops, and allied governments have responded by mobilizing their immense financial resources. The restrictions were aimed to avoid disrupting vital energy exports, which are used to heat homes, power factories and fill gas tanks in Europe. This helped to moderate, but not eliminate, a rise in energy costs brought on by the war and fears of disruptions in the flow of oil and gas. Fears of shortages also drove up the price of various commodities and metals, putting more pressure on households and businesses. Russia and Ukraine also export a lot of wheat and grain, as well as important metals like palladium, aluminum, and nickel, which are used in everything from cell phones to automobiles. It is a one-of-a-kind combination of measures done. Each metric is not unprecedented in its own right. The level of multilateral cooperation, as well as the fact that they're utilizing these nuclear options at the same moment, is unparalleled in history. It will undoubtedly have a significant impact on the Russian economy, but there is still room for further escalation. We're already in the midst of a double-digit economic downturn. Russia has taken extraordinary measures in terms of capital controls and preventing non-residents from receiving foreign money transactions. Exporters must convert 80% of their profits to Russian currency, and the central bank has more than doubled interest rates. Russia is providing financial assistance to banks by releasing capital.

There are many unanswered issues, particularly in Europe, about what the conflict means for inflation — and whether it raises the risk of stagflation, which occurs when economic growth slows, and prices rise rapidly. However, the overall harm is likely to be minor. That doesn't rule out the possibility of severe discomfort in some areas. A few European banks may be harmed by their exposure to the Russian financial system, and Eastern European enterprises may lose access to funds in Russia. Thousands of refugees fleeing Ukraine are pouring into neighboring nations such as Poland, Moldova, and Romania, potentially increasing their expenditures.

On the ruble, there has been some movement. The rate hike had an impact — the central bank raised interest rates from 9.5 percent to 20 percent — and capital controls should help as well. It will be crucial to monitor what individual and corporate depositors do in this situation and whether they would accelerate the dollarization of deposits, which means they will generate a large demand for dollars. If you have a ten-percentage-point increase in the dollarization of domestic deposits — as we saw in the 2008 crisis — you're under pressure to have $100 billion in reserve, which they don't have.
So, what does this all mean for the global economy? Will there be repercussions? It will almost certainly have knock-on consequences through financial and trade channels, as well as pure contagion. We are expected to see an effect on commodity prices as a result of trade, and we are already experiencing it. Oil and gas, as well as numerous medals and mining commodities, as well as agricultural products, are all key exports for Russia. Ukraine is a major supplier of a variety of metals and agricultural products. We'll see the consequences there, as well as on worldwide inflation, and then the question will be how global central banks react in each country's specific circumstances.

The History of Ukraine-Russia Geopolitical Conflict