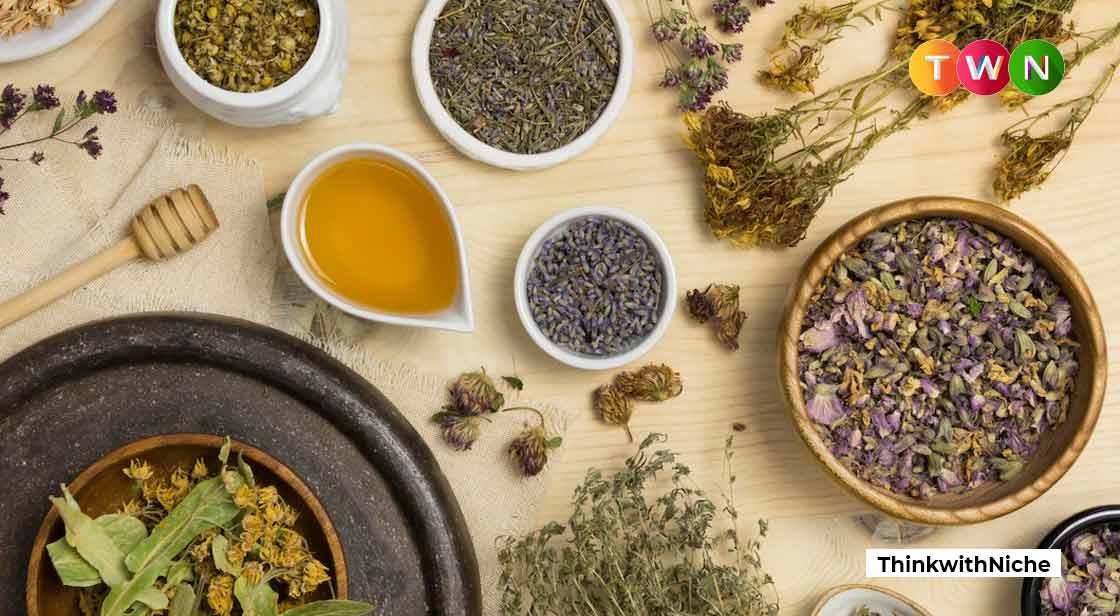 In the present situation, when the entire world is seeking a cure for the Covid-19 outbreak, several health professionals have advocated boosting the immune system. In this dire situation, medicinal plants have emerged as a lifesaver. Here are some profitable medicinal plants to boost the medical industry. #ThinkwithNiche

Many health experts have recommended increasing the body's immune system in the current circumstance when the entire globe is trying to find a treatment for the Covid-19 epidemic. It can assist in lessening the disease's effect and expedite recovery. Medicinal plants have emerged as a rescuer in this dire scenario. These medical plants can have effects that are comparable to pharmaceutical medications, and humans have been utilizing them for centuries to either cure or alleviate sickness symptoms. These plants are classified as medicinal plants. Medicinal plants may produce a wide range of chemical compounds that are used to carry out critical biological tasks and guard against threats such as insects, fungus, and herbivorous animals.

All civilizations and cultures have known the advantages of these plants from ancient times, having employed them for medicinal, religious, cosmetic, nutritional, and beauty purposes. Here are a few high-demand and profitable herbal plants that you may start cultivating for profit.

Early Egyptians referred to Aloe Vera as the "Plant of Immortality." Aloe Vera is said to be the world's oldest known medicinal plant. This plant is widely used in the cosmetics and pharmaceutical industries. Aloe Vera extract is a fantastic skin healer. Skin injuries, burns, skin irritations, wounds, and insect bites can all be soothed with Aloe Vera gel. Aloe vera can only grow in the sun and well-drained, dry soil. Aloe vera sap is excellent for speeding up wound healing and minimizing the danger of infection in wounds, cuts, and burns, as well as reducing inflammation. Aloe vera juice is used orally to treat ulcerative colitis, persistent constipation, poor appetite, and digestive disorders, in addition to its external application on the skin. The 'Miracle Plant' is a powerful medicinal plant that can be cultivated at home.

Basil is a frequently used and well-liked medicinal herb. It boosts immunity, improves digestion, heals inflammatory disorders, fights free radicals, deep cleanses the skin, lowers blood sugar, decreases depression, and detoxifies the body. Basil is used as a garnish on a variety of foods, in soups and salads. Basil grows best in full sun with well-drained soil. To stimulate branching and the growth of new leaves, pinch off the blossoms as soon as they begin to form.

Lavender is well-known for its lovely scent, but it also has medicinal properties as a nervine and moderate antidepressant. The most important needs for a healthy lavender plant are full light and well-drained soil. It is well-known for the essential oil obtained from the distillation of some lavender species' flower spikes. It can be used both cosmetically and medicinally. The antibacterial and anti-inflammatory qualities of lavender oil aid in the healing of burns and insect bites. Stress, anxiety, despair, and sleeplessness can all be alleviated with lavender oil. It prevents hair loss. Lavender tea can also help with digestive issues and nausea.

Mint is sometimes referred to as the world's oldest medicine, with archaeological evidence indicating that it has been used for at least ten thousand years. Manganese, vitamin A, vitamin C, and iron are all found in abundance in mint. It helps irritable bowel syndrome, cognitive function, digestion, and cold symptoms, as well as is the simplest remedy for foul breath. Rubbing crushed leaves on the skin helps to relax and relieve muscles. Mint may help with everything from mood enhancement to stomach relief. Mint plants thrive in wet soil, mild temperatures, and full to partial sunshine. Mint plants are well-known for providing a cooling effect.

One of the most prized culinary and medicinal plants for a home garden is the woody perennial herb. By increasing the amount of oxygen in your brain, you will feel more energized and optimistic, as well as improve your memory and focus. It's a fantastically exciting caffeine substitute. Sauces, soups, and stuffings all include it. It increases blood circulation and stimulates the immune system, as well as treating indigestion and preventing brain damage. A row of these drought-tolerant, long-lived plants produces a lovely, bee-friendly evergreen hedge. Because a little goes a long way, you may only need one plant in your garden.

Chamomile has a delicate apple aroma. Chamomile is often used for anxiety and relaxation and is considered by some to be a cure-all. Chamomile can be consumed as a tea or applied to the skin as a compress. It may exacerbate sleepiness brought on by medications, herbs, or supplements. Chamomile is one of the greatest children's herbs for treating colic, psychological tension, infections, and stomach ailments, according to NCCAM. Chamomile is mostly farmed for its little, yellow-bellied blooms.

Skin irritation following radiation cancer treatments can be treated with chamomile for the skin. Chamomile capsules can help with nausea and vomiting during chemotherapy. It has a relaxing and soothing impact in aromatherapy, where it is used to relieve tension and promote sleep. The plant is also used to cure toothaches, earaches, shoulder discomfort, and neuralgia, among other ailments.

By activating the immune system, echinacea, one of the world's most significant therapeutic herbs, can increase the body's resistance to bacterial and viral illnesses. The use of echinacea for upper respiratory infections is beneficial in several trials. It also has antibacterial qualities, which aid in the relief of allergies. Essentially, the roots may be used to heal ulcers, wounds, and burns. Native Americans used it as a treatment for bug bites, stings, and snakebites in the past. Echinacea may cause an allergic response in those who are sensitive to plants in the daisy family. If it receives enough sunlight, echinacea may flourish in any well-drained soil.

Feverfew has been used to cure fevers for centuries. It's widely used to treat arthritis and migraines. Certain feverfew formulations have been reported to help prevent migraines in several studies. If the leaves are consumed, they might cause mouth ulcers and stomach distress. Migraine people who stop using feverfew suddenly may have a repetition of their symptoms. Nonsteroidal anti-inflammatory drugs should not be used with feverfew since they may alter their effectiveness. It should not be used with anticoagulants like warfarin.

Ginger is the core cause of a wide range of health issues. All you need to do is plant the ginger root in your garden and wait a few days for it to grow. It does not necessitate a lot of attention. It is a significant component in Indian cuisine because of its flavor and, of course, its health advantages. Ginger is most recognized for its ability to relieve nausea and motion sickness. Ginger has been shown in studies to help with pregnancy nausea and chemotherapy. Ginger's application in surgery and as an anticancer agent are two more areas of research. Its wide-ranged activities might be attributed to its anti-inflammatory and antioxidant properties.

Ginkgo biloba leaf extract has been used to treat asthma, bronchitis, tiredness, and tinnitus, among other ailments. It's also used to boost memory, prevent dementia, and for other mental illnesses. Its little efficacy has been supported by many pieces of research. Only leaf extract should be used. Ginkgo poison is found in the seeds. This toxin can induce convulsions and even death in big doses. Ginkgo should not be taken with nonsteroidal anti-inflammatory drugs, anticoagulants, anticonvulsant medications, or tricyclic antidepressants since some research shows it may raise the risk of bleeding.

Ginseng has long been used as a tonic, aphrodisiac, and even a cure-all. Ginseng offers a wide range of health advantages, but it is best known for being a potent tonic plant that promotes excellent health. Its medicinal properties are used to treat menopausal problems, geriatric debility, physical and mental stress, bone marrow suppression caused by chemotherapy, hypercholesterolemia and neurasthenia, insomnia, poor appetite, memory improvement, anti-inflammatory purposes, immunogenic purposes, and radiological protection.

The effectiveness of the research is unknown, mainly due to the difficulties of defining ‘vitality’ and ‘quality of life.’ The grade of ginseng on the market varies greatly. Ginseng can cause side effects by increasing blood pressure. It should never be used with warfarin, heparin, nonsteroidal anti-inflammatory drugs, estrogens, corticosteroids, or digoxin. Ginseng should not be used by diabetics.

Calendula, or French pot marigolds, often known as orange and yellow blooms, prefer full light. It's a hardy annual that blooms from summer to frost and is easy to cultivate from seed. It can thrive in almost any type of soil. It thrives on nutrient-depleted, extremely acidic, or very alkaline soils if they are wet. The deep-orange flowered calendula variant is administered topically to bites, stings, sprains, wounds, and sore eyes and is well recognized as a treatment for skin ailments. It is used to treat fevers and persistent illnesses inside. The tea of the petals improves circulation and reduces varicose veins when consumed regularly.

Marigold is a highly valued medicinal plant that is commonly cultivated at home. It is more than simply an attractive plant. The blooming head has medicinal characteristics, including the following: It improves arthritic pain, it’s used to treat burns, stings, bites, and inflammation in ointments. It alleviates the signs and symptoms of inflammatory bowel disease. Eye infections, inflammations, and conjunctivitis are relieved by antibacterial and antifungal characteristics. It helps to alleviate hemorrhoid discomfort.

It is possible to make money growing therapeutic herbs. You should be well-versed in the therapeutic characteristics of the plant you wish to cultivate. Popular therapeutic plants include Aloe Vera, which is a low-maintenance plant that may provide you with significant financial benefits. These medicinal herbal plants might provide you with cash if you have the correct gardening skills and care.