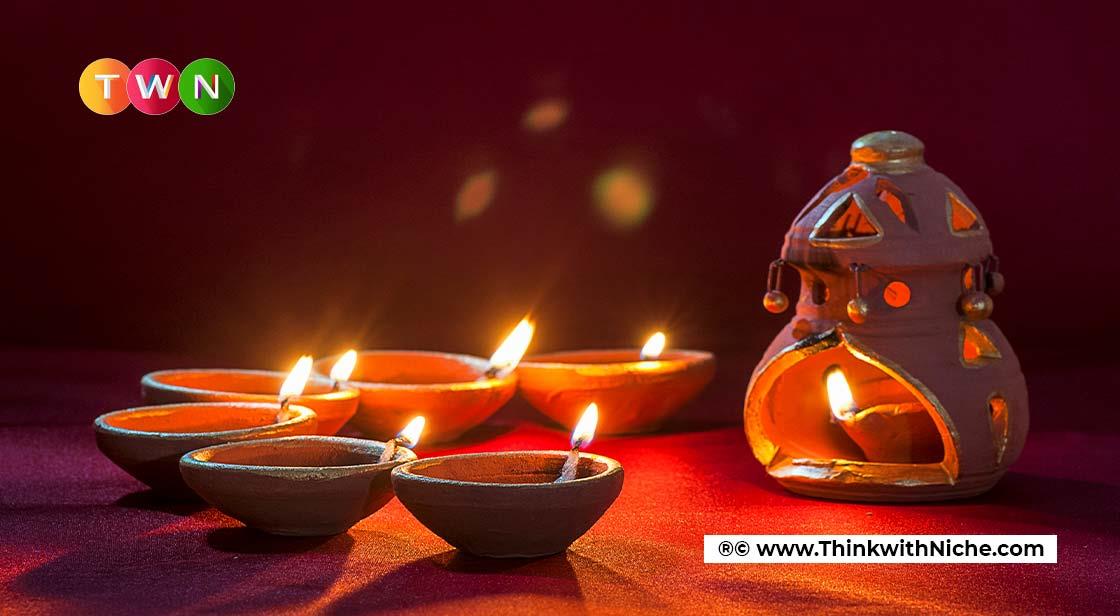 Diwali is a Hindu festival known as the "Celebration of Lights." In terms of intensity and involvement, it is one of the most important Hindu festivals, if not the most important. It is a worldwide festival that is observed by both Hindus and non-Hindus. Diwali is a festival that celebrates the triumph of good over evil or the joy of success over defeat. Read the paragraph above to learn more about Diwali. #ThinkwithNiche.

The most important and brightest of all Hindu festivities is Diwali. It is the Festival of  Lights and Victory. 'Deep' means 'Light' in Sanskrit, and 'Avali' means 'row,' resulting in a 'row of lights. 'Diwali is World's most important festival, commemorating the victory of good over evil, the triumph of light over darkness. Diwali is a five-day festival that includes prayer, feasts, fireworks, candles, family gatherings, and charitable giving. It is celebrated by over a billion people from all religions in India and its spread. Diwali is a Hindu festival that takes place shortly before the new moon between the Hindu Lunar months of Aswin and Kartika, which usually occurs in October or November on the Gregorian calendar.

Diwali is such a widely attended religious holiday for Hindus, but it is also observed by Jains, Sikhs, and Buddhists, thus it does not have a single origin narrative. While each religion's ancient story for the celebration is unique, they all end with virtue triumphing over evil.

There are numerous variations of the Diwali tale in Hinduism. These, on the other hand, are all epic tales of individuals who were considered incarnations of the Hindu god Vishnu, who is worshipped as the universe's sustainer and whose task it is to restore the balance of good and evil in the face of adversity Some believe it commemorates the union of Lakshmi, the goddess of riches, with Lord Vishnu. Others use it to celebrate Lakshmi's birthday, which is thought to have occurred on the new-moon day of the Hindu month Kartika. Diwali, which occurred with the last harvest before winter in India's early rural population, was a time to pray to Lakshmi for good fortune.

Mother Kali, the dark goddess of power, is worshipped in Bengal during this festival. On this day, most Hindu families worship Lord Ganesha, the elephant-headed deity and emblem of auspiciousness and intelligence. Deepawali is also significant in Jainism because it commemorates Lord Mahavira's attainment of nirvana or perpetual happiness.

Diwali is a Hindu festival celebrated in northern India that commemorates Prince Rama's triumphant return to Ayodhya after 14 years of exile due to his wicked stepmother's plotting, as well as his heroic rescue of his wife Sita, a manifestation of the goddess Lakshmi, who had been kidnapped by the rival monarch Ravana.

Meanwhile, in South India, Diwali commemorates Lord Krishna's triumph over the demon king Narakasura, who had imprisoned 16,000 ladies in his castle and punished any of his followers who dared to oppose him. In western India, the festival commemorates Vishnu's exile to the underworld of King Bali, whose enormous might had become a menace to the gods.

In India, the Sikhs, Jains, and Buddhists, each have their unique Diwali folklores. Diwali celebrates the liberation of the 17th-century guru Hargobind after 12 years of captivity by Mughal emperor Jahangir for Sikhs, whose faith began in the late 15th century as a sect within Hinduism that is particularly devoted to Vishnu. Jains celebrate Lord Mahavira, the last of the great Jain gurus, reached nirvana on Diwali. Jains celebrate Diwali as the day of Lord Mahavira, the last of the great Jain preachers, whose ancient religion dates from the middle of the first century B.C. and shares many of Hinduism's beliefs. Buddhists, whose religion in Diwali evolved in response to Hinduism in the late sixth century B.C., mark the day when the Hindu Emperor Ashoka, who ruled in the third century B.C.

All of Diwali's basic rituals have a deeper meaning and a tale to tell. As a gesture of reverence to the heavens for the attainment of health, riches, wisdom, peace, and prosperity, homes are lit with lights, and firecrackers fill the skies. The boom of firecrackers, according to one mythology, represents the delight of the people on Earth, alerting the gods of their abundant situation. Diyas, candles, and lamps are put throughout the house on this day to light the road to wisdom and triumph. Each home is embellished with a variety of colored lights and diyas or candles. The entire nation is bathed in a beautiful glow of light and warmth coming from every home, creating a wonderfully breathtaking picture. Diwali is also a cleaning ceremony since it represents letting go of all the cares and difficulties of the previous year and entering into the light.

The importance of the victory of good over evil may be found in every Deepawali tale, myth, and narrative. This basic fact finds fresh reason and hopes with each Deepawali and the lights that fill our homes and hearts. The light inspires us to commit to good actions and draws us closer to divinity as we go from darkness to light.