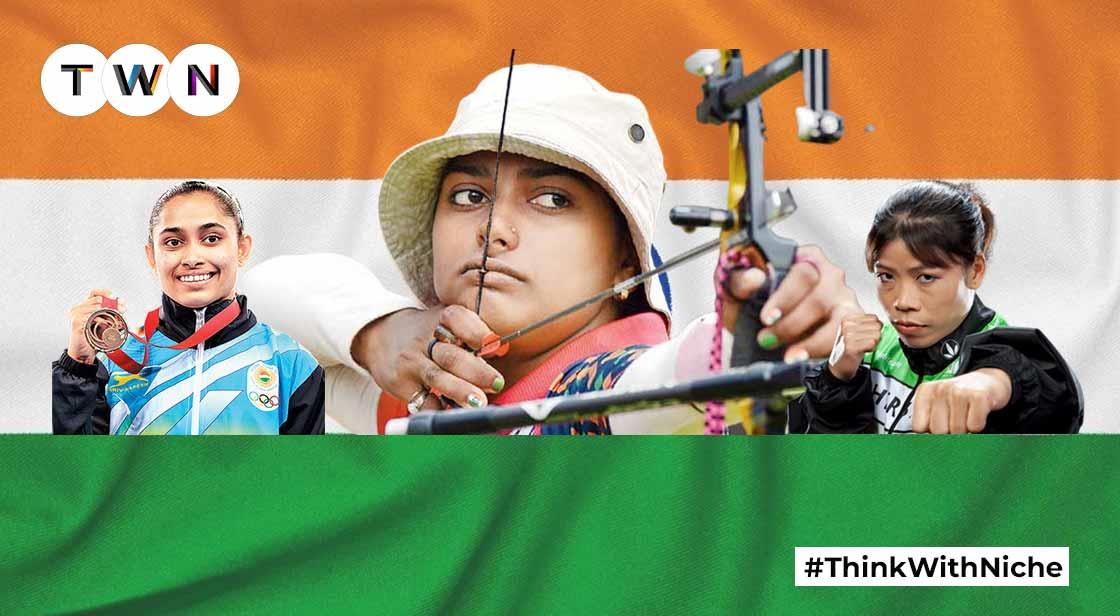 Sports has long been a dominating space for men but that has been changing slowly over the years as many strong and talented women have entered sports and made their country proud at the international level. Such is the case with Indian sports. Learn about some of the greatest women athletes of all time.#ThinkWithNiche.

Our society is built on strong pillars of patriarchy and the branches of it extend to every field and profession. The sheer sexism that women in our country face on a daily basis is disgusting, to say the least. Everyone must have heard the phrase, “Don’t run like a girl!” at least once in their lifetime. Men have long been the gatekeepers of all sports till very recently when women began participating in sports and showed these misogynistic folks that when girls run, they win medals. Women, like in every field, are challenging and changing norms in sports too. Be it hockey, weightlifting, cricket, or tennis, women have slowly started dominating the top positions in these sports. Take the 2021 Tokyo Olympics for example. Most medals that India won were won by strong and dedicated sportswomen.

But often, when we discuss sports, the discourse remains dominated by men. But it’s time to shake things up and celebrate sportswomen in all their glory. Let’s have a look at some of the greatest Indian sportswomen we have and their glorious achievements.

Vandana Katariya is a young Indian field hockey player. She hails from the small neighborhood of Roshnabad, Haridwar. Vandana’s journey to the top is filled with thorns. Not only she had to face gender discrimination but also caste-based discrimination. It’s shameful that the ancient practice of caste still haunts the consciousness of India. But Vandana didn’t let anything come her way as she was adamant to prove her talent. And her talent and passion as a hockey player were on full display in the Tokyo Olympics where she played for the Indian hockey team. She became the first Indian woman to score a hat-trick at Olympics.

If there’s one person who challenged the gender bias of the Indian society early on and paved the way for many of our celebrated sportswomen, it’s none other than Sania Mirza. Becoming a professional at the young age of 16, it’s Sania’a passion and dedication to Tennis that has made her a legend. She is perhaps one of the few women in Tennis who held the number one rank for 91 weeks straight. That’s a long time to remain at the top. Sania is a huge inspiration for many girls and for many young Indian athletes.

It’s shameful for all of us that it took a mediocre Bollywood biopic that made us took notice of the genius of Mary Kom. Mary Kom, now an iconic Indian boxer, broke many gender norms by participating in the game of boxing, a sport that was and still remains dominated by men. Many even consider boxing too ‘tough’ a game for women. But Mary Kom proved all of them wrong and how. Mary is a five-time world amateur boxing champion and perhaps the only woman in boxing to have won a medal in each of the 6 world championships. Mary Kom also became the first Indian woman to win gold in the 2014 Asian Games.

Deepika Kumari’s name still remains oblivion despite archery being India’s strength at many international games. Deepika’s skill and talent in archery became evident when she won gold in archery in the 2010 Commonwealth games. Soon she became the world’s no.1 champion in archery.

Dipa Karmakar rose to international fame when she participated in the Summer Olympics in 2016. Although she lost, her skills as a gymnast shocked everyone and made everyone take notice of her. It was decided then that she will go on to become a towering figure in the Indian sports scene and that’s exactly what happened. Dipa was born in a humble family in Tripura and was born with a flat foot but despite that, she went on to become one of the greatest Indian women gymnasts.