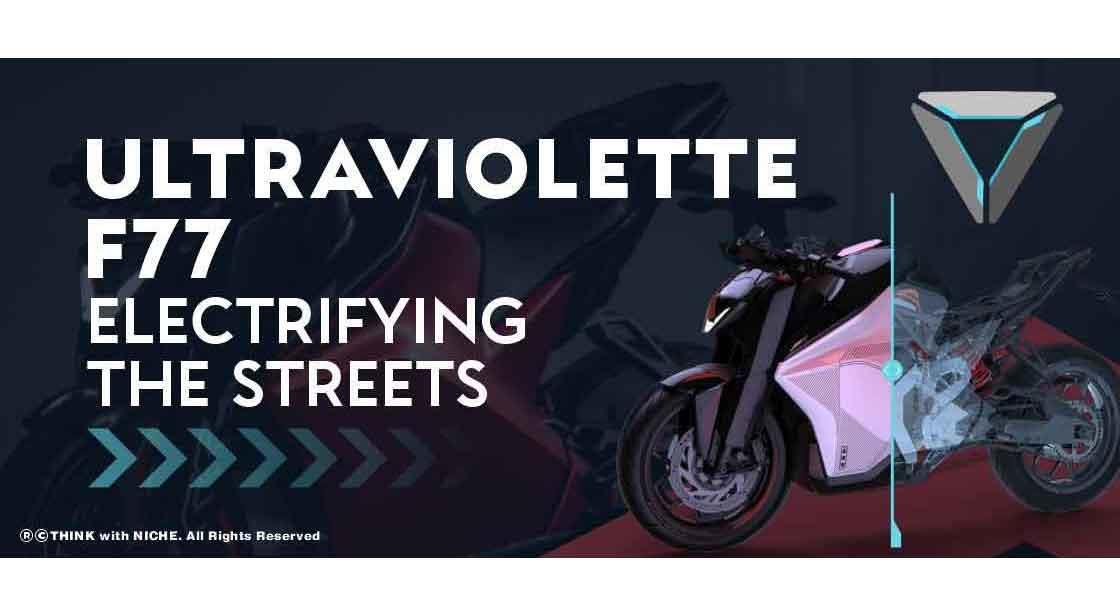 F77 is not just another electric vehicle in the market that will be looked at as a normal EV. F77 is here to stay and rule the streets. You will know when you see an F77 roaring on the street among the competitors with gears and fuel. If you are looking for your first bike, wait for a little while and make your grand entry on Ultraviolette F77 – The Future Ready Bike. #TWN

F77 sounds like a name of a fighter jet but trust me, it is the ruler of the streets. Born for the streets but aims to fly high like jets. This magnificent piece of beauty is the brainchild of Ultraviolette Automotive, the Indian brand that aims to electrify the world of the automotive industry. Motorheads love the smell of burning fuel when they ride their bikes. They love the air in their hair. Ultraviolette wants to make those motorheads love a bike that has no touch with fossil fuels but can give the same adrenaline rush as a fuel-powered bike. This article will talk about the company and its first-ever product that is surely a head-turner when it passes by you on the streets. So, get your helmets on, put on some gloves, and rev it up! Electrically.

In 2015, the news came out that a new motorcycle company was entering the Indian market, and all were very excited because the company was of Indian origin. Proud Indians! Ultraviolette Automotive was established in Bangalore. It was the brainchild of two lifelong friends, Narayan Subramaniam and Niraj Rajmohan. This dynamic duo has been competitive since school days. They competed with each other and now have teamed up to bring the best electric bike to the Indian market. Every company is electrifying their vehicles, and here is Ultraviolette, starting with an electric bike that has the looks to die for! The founders have been friends for a long time of 20 years and are extending this friendship in the form of a partnership. Their efforts and sheer determination are the reason we are witnessing the rise of an Indian brand that is ready to take over big bulls like Harley – Davidson in the electric segment. Soon they will go up against petrol giants and establish their supremacy. Their main rivals as of now are LiveWire (Harley Davidson) and Zero Motorcycles. They are also willing to take on some 300-350cc bikes globally. Let’s see how much they can keep us on the edge of our chairs. Talking about the founders, Narayan has mastered the designing and engineering skills while working with some top companies in Japan and Germany. He worked with Toyota and Volkswagen, respectively. Meanwhile, Niraj has worked in the States and Bangalore. Now it’s the time to reveal the first bike they have made, the mighty F77! All set to launch in India this March 2022 and globally in 2024. The bike was announced way back in 2019, but due to COVID, the plan to launch the bike was postponed. Narayan said that he hopes to launch the bike this year, hoping that chip shortage and the covid third wave would not disrupt any plan. The Ultraviolette Automotive F77 is a premium electric bike that has a riding range of 150 km. That is far superior and economic looking at the fuel prices. F77 has only one variant as of now, which has a range of 150km. The company says that future variants will have a longer range as well. Talking about the price, reports say that starting price will be INR 3 lac. Prices will change later when more variants arrive in the universe of Ultraviolette Automotive. The disruption that occurred in 2019 wasn’t a bad thing that happened to the team of F77. These two years were enough to perfect the bike and build a presence in the market. Over these three years, the company recruited developers and marketing specialists from different fields to create intensive space for the bike. The high-speed test was conducted extensively amidst the pandemic on the Taneja airport track close to Bangalore. Every possible test was conducted to make sure they launched a perfect electric bike.

F77 will be launched in India to compete with some known bikes such as Apache, KTM, and Bajaj.

Let us know everything about the beast that is about to be revealed in a few months. F77 is like a predator ready to chase and pounce silently. It will be a great bike to own and let people admire its looks. When such a diligent machine competes with the well-known street rulers, there will be friction among the motorheads. F77 is sure to get attention in the industry as well as on the streets. To make it even better, a 25% stake in the company is owned by TVS Motors, and F77 will be the first product to roll out under their banner. Having said that, let’s talk about some technical aspects that always give chills to bike lovers. If you are getting excited, you are a bike lover, proudly.

Talking about the chassis, F77 has legendary bespoke trellis frame chassis, strong and sturdy. The bike has a frame-mounted electric motor that claims 33.5hp power and produces massive torque of 90Nm. Nuts! Isn’t it? The torque may be higher, but it isn’t close to those petrol engine machines yet. However, in terms of power, it can surpass big bulls like TVS Apache RR 310 in a very healthy way. The motor in it is air-cooled that powers the rear wheel through the chain drive. Since there is no clutch, you need not worry about the gears. Just twist the throttle and feel the speed. The company claims a 7.5sec time frame for 0 to 100 km/h. The initial throttle pull will assure you this machine is capable of that acceleration. After 80 kph, you can feel a strong pull that begins to taper down. You can easily cruise at the speed of 120 kph without any struggle. The highest speed recorded is 134 kph, enough to compete with 200-250cc beasts on the street. New variants may give a tough fight in the 300cc segment. Being electric, you can assume it’s quiet out on the streets, but that’s not true. It marks the presence with a whine from motors and reduction ratio gears. Even the chain drive sounds amazing in this street beauty. The curb weight is 158 kg which is impressively low. It will cruise through the corners without any hesitation. Talking about the battery, you can charge the batteries away from the bike in a power charger, or you can plug in the supercharger in the bike itself and let it charge. The company claims to give you additional batteries in case you want to buy them. While the company recommends running your bike on all three batteries, you can even run your bike on at least two all the time. With a standard charger, it will take five hours to charge the batteries while 1.5 hours with a supercharger.

What will be the cost of the Ultraviolette F77 electric motorcycle? Well, that is still questionable. According to the sources, F77 will cost you around 3-3.5 lac INR. Hopefully, we might get this affordable beast ready by the end of this year.

Revving it off, Finally

F77 is not just another electric vehicle in the market that will be looked at as a normal EV. F77 is here to stay and rule the streets. You will know when you see an F77 roaring on the street among the competitors with gears and fuel. If you are looking for your first bike, wait for a little while and make your grand entry on Ultraviolette F77 – The Future Ready Bike.

You may also like this article: TVS Motor and Zoho invest in Ultraviolette Automotive