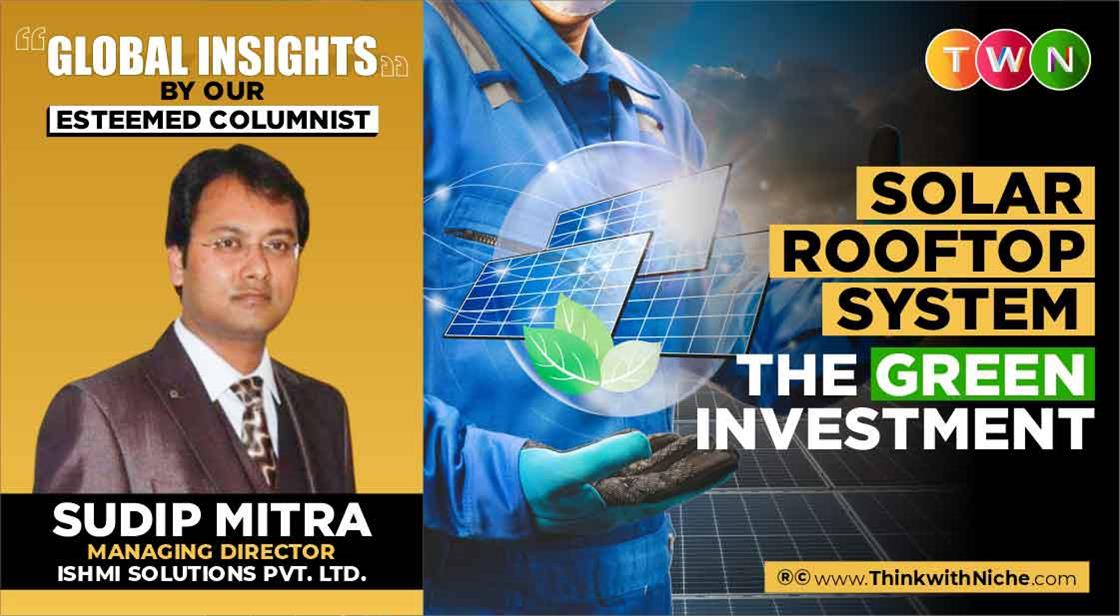 Sun is worshiped as a life-giver to our planet since ancient times. The industrial ages gave us an understanding of sunlight as an energy source. India is endowed with vast solar energy potential. Solar also provides the ability to generate power on a distributed basis and enables rapid capacity addition with a shorter lead time. #TWN

From an energy security perspective, solar is the most secure of all sources. Theoretically, a small fraction of total incident solar energy can meet the entire country's power requirements.

Solar energy-based decentralized and distributed applications have benefited millions of people in India by meeting their cooking, lighting, and other energy needs in an environment-friendly way.

The social and economic benefits like reduction in hard work especially among rural women and girls engaged in the collection of fuelwood and cooking in smoky kitchens, minimization of the risks of contracting lung and eye ailments, moreover improvement in the standard of living and creation of opportunity for economic activities.

Further, the solar energy sector in India is visible as a significant play in grid-connected power generation capacity over years.

It supports the government's agenda of sustainable growth, emerging as an integral part of the solution to meet the nation's energy needs and essential tenet for energy security.

National Institute of Solar Energy has assessed India's solar potential as about 748 GW assuming 3% of the wasteland area that shall be covered by Solar PV modules. Solar energy has taken a central place in India's National Action Plan on Climate Change as one of the key Missions.

National Solar Mission (NSM) was launched on 11th January 2010. NSM is a major initiative of GOIn with active participation from States to promote ecologically sustainable growth while addressing India's energy security. It will also comprise a major contribution by India to the global effort to meet the challenges of climate change.

It is in line with India's Intended Nationally Determined Contributions (INDCs) target to achieve about 40 percent cumulative electric power installed capacity from non-fossil fuel-based energy resources and reduce the emission intensity of its GDP.

Presently, solar tariff in India is very competitive and has achieved grid parity.

The generation of solar energy has tremendous scope in India.

The geographical location stands to its benefit for generating solar energy. The reason being India is a tropical country, and it receives huge solar radiation throughout the year, which amounts to 3,000 hours of sunshine. It is equal to more than 5,000 trillion kWh. Almost all parts of India receive 4-7 kWh of solar radiation per sq. meter.

It is equivalent to 2,300-3,200 sunshine hours per year. The use of solar energy can reduce carbon footprints heavily and minimize the usage of Fossil fuels.

India has a massive plan for Solar Energy generation that may not only fulfill the deficit of power generation but also contribute largely to Green Energy Production to help reduce Climatic Changes globally.

As the world and population progress, We at ISPL are promoting solar power as one of the most sustainable sources of renewable energy to challenge the rising power demand problem with the right balance between energy security, economic development, and environmental sustainability.

The solar energy sector has been a pivotal point of enormous investments in the form of R&D and innovation, intended towards higher power generation and proficiency but also from viewpoint of energy stowing, financial models as well as integration of renewable energy resources with prevailing grid infrastructure.

The expenses for setting up PV projects in India have suggestively dropped amid 2010 and 2019, conferring to an analysis report shared by IRENA in 2019.

With encouraging government policies along the way, the solar industry is gaining further momentum when Prime Minister Shri Narendra Modi broadcasted an upsurge in India's solar capacity target to 100GW+ by 2022, and also elevated a capital subsidy as preliminary support.

Seeing factors of environmental sustainability, the government of India ramps up its effort to transition to solar power.

And with innovation in renewable energy, it has a progressive prospect and is well appreciated by all.

In a compactly populated country like India, the land is a scarce resource. Setting up a utility-scale PV project requires large bounces of land, as per current technology values.

Further, scaling up projects require large chunks of contiguous land, which is a challenge.

Floating solar photovoltaic (FSPVs) plants refer to a solar PV installation system that is straddling on a floating structure over a water body.

Besides reducing the zero land requirement, FSPV's produce about 10% more power associated with land-based/rooftop solar plants due to the conserving effect of water.

It delivers a sustainable and effective solution for managing the energy efficiency of the building, thereby providing significant savings in electricity costs with zero carbon footprints.

There has been an augmented recognition of high-efficiency monocrystalline technology and Bifacial Mono Perc Technology making gain from Albedo effect in solar ventures across India, which, in turn, has urged the module manufacturers to promptly scale-up production of mono PERC modules, also known as Half-cut cell technology.

This modification from polycrystalline modules to mono PERC modules is driven by higher efficiency, which relieves in reducing land and other balance of system (BoS) costs for developers, resultant in higher returns.

Due to its price-sensitive nature, the Indian market is a little slow to respond but still gaining acceptance.

Nowadays, solar module companies in India offer mono PERC and Bifacial modules with 400+Wp power output with the competence of more than 20+%, further supporting the thought of shifting to this technology resource.

The extensive use of solar energy knowingly diminishes the adverse impact on the environment. It consumes the most abundant raw material.

Further, with progressions in the technology of solar panels and swelling efficiency, it is absolutely time to accept this technology for households, corporates, and governments.

We are ISPL, Supporting government agendas of sustainable growth, emerging as an integral part of the solution to meet the nation's energy needs and essential tenet for energy security.

India's commitment to achieving Net Zero emissions by 2070 is to not just walk the talk on the climate crisis, but run it for Results.

At the 26th Conference of Parties (CoP26), Indian Prime Minister Narendra Modi declared a five-fold strategy - termed the panchamrita - to achieve this feat.

2. India will meet 50 percent of its energy requirements from renewable energy by 2030

3. India will reduce the total projected carbon emissions by one billion tons from now onwards till 2030

4. By 2030, India will reduce the carbon intensity of its economy by less than 45 percent

It is known as the world's third-highest polluter in 2019, but its scale of emissions, as compared to the highest polluter and second highest, are not comparable, not by a margin.

And, we have a huge need to grow our economy and to meet the energy needs of millions of our people.

As more Indian's purchase cars this is set to be one of the biggest areas of growth for fossil fuel demand and emissions.

Over the past few decades, energy use in transport has increased manifold making it the fastest-growing sector by this measure.

Ideally, all of this demand is met by petroleum products.

Two or three wheeled vehicles - motorbikes, mopeds, and rickshaws - make up four-fifths of Indian road stock and have shown some progress in electrification.

STEPS looks like, probably half of these vehicles may be electrified by 2040.

However, it is important to note that, they only account for around a fifth of total fuel consumption.

The ambition is the transformation of India's transportation, with about 60% of cars and smaller vehicles electrified by 2040.

Solar modules have no moving parts making maintenance costs low, and they are highly reliable with a long service life of 25+ years of guaranteed electricity.

Grassroots efforts are being brought with solar panels / Energy by individual efforts and contribution of villages without electricity, manufacturing hubs, while massive solar arrays are being built across the country by Government.

This is showing a paradigm shift seeking it as a wise investment choice for the powerful Solar plant with future technology like Mono Perc Halfcut and bifacial cuts down electricity bill up to 80% and pays back itself in as low as 4 years if not less. It is now been viewed as a more formidable option than any low-risk investment.

Beautiful designs, crafted by our engineers and deployment teams, also transform your roof into a space of worth.

This green investment empowers you by giving you huge long-term savings for not less than 25 years.

To encourage and expedite the spread of solar-based power technology. We at ISPL understand possible barriers and incentivize households with progressive Solutions as a package.

But there's clear evidence that especially in Residential and manufacturing places they don't easily abandon the existing energy sources which they should not.

In addition to this individuals, groups, organizations are looking highly on surrounding as a Livable entity for Future Generations.

Keeping sustainability in mind, the likelihood of adopting solar plants especially at Residence is linked with base cost, effort, and desire.

Making a major decision such as a solar installation is very different from the decision to switch off a light.

Although people are believing and accept solar energy as a preference, individual or Group decisions are tangible but otherwise can seem pretty jittery.

If one can't quantify it, what does it mean? In the solar rooftop system, return on investment is equally understood by industry and end-user.

Hence, more effort should be made to clarify the ROI for this Wise investment for Long term gain and not quick Results.

Sudip Mitra is the Managing Director at ISHMI Solutions Private Limited. His alliance with Think With Niche is on an honorary basis. The references, facts, and figures that he uses in his content are by virtue of his experience and opinion. Think With Niche holds no part in structuring his content.

Sudip Mitra has been kind enough to be One of Our Mentors and accepted to be An Esteemed Columnist with Think With Niche Platform and share his years of experience and knowledge with our Users/Readers as Knowledge.

In case you find any discrepancy in his articles, you can reach us at Editor@thinkwithniche.com!