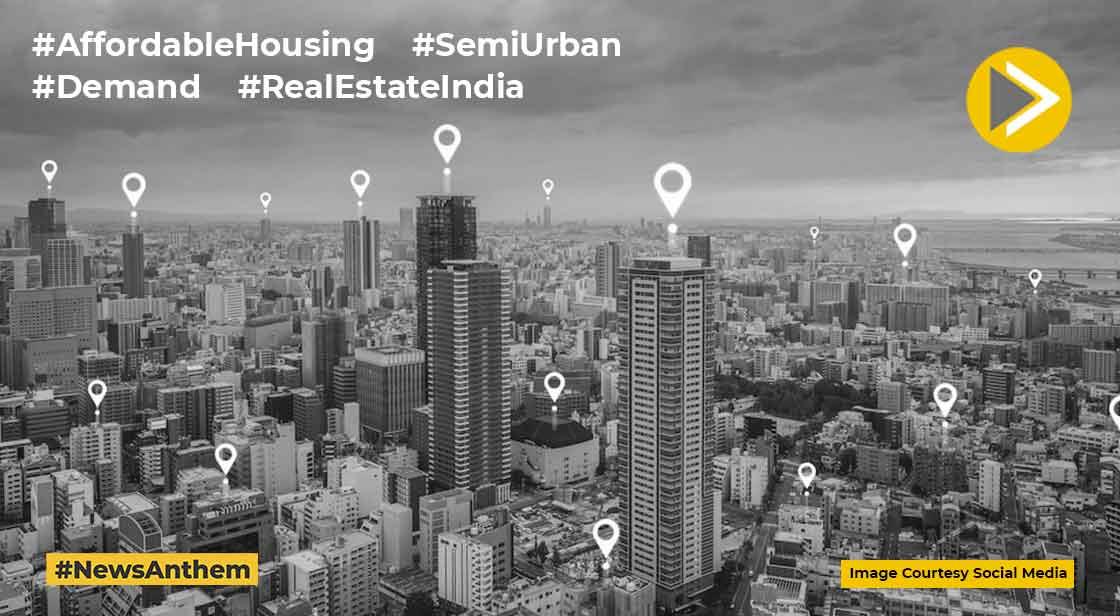 The Rural and Semi-Urban Affordable Housing Demand has outshined the Urban Clutter and it is driving the Indian Real Estate Marketplace in 2022, and will keep performing at a greater pace in days to come.
The demand for affordable housing projects has been on a constant rise in the post-pandemic era especially in the rural and semi-urban areas mainly due to three main triggers as Key Growth Drivers:
Firstly, the massive reverse migration that occurred following the pandemic lockdowns. The rising popularity of hybrid or remote work culture/ formats (jobs) has increased the demand for quality housing within smaller cities and towns. The demand for semi-urban housing loans is higher than ever before. Hybrid working has led to increased demand for affordable housing projects in various towns and city outskirts.
The second big logical driver for the multiplication formula of growth in affordable housing schemes and projects is based on the expectation of a good harvest reducing risk aversion, which had crept into rural economies during the pandemic. Instead, it has fueled the desire for large-ticket purchases and investments, including home ownership.
And Lastly, the demand for low-cost housing has been aided by the increased disposable income of the rural and semi-urban populations.

The rural economy is showing signs of recovery after four-quarters of the slowdown due to the pandemic. It is now recovering faster than the urban cities, due to increased demand, strong monsoons, and lower commodity prices like edible oil.

Despite the slow start of the monsoon, the rainfall has been increasing in all parts of the country. The southwest monsoon accounts for nearly 70% of India's annual rainfall and is the backbone of the country's $2.7 Trillion agriculture-dependent economy. Strong monsoons can make a significant difference in improving the income level of the hinterland as well as driving consumer buying sentiments.

India is currently facing a housing shortage in the affordable housing segment. The Government of India launched the Pradhan Mantri Awas Yojana (PMAY) in 2015 and the Credit-Linked Subsidy Scheme (CLSS) in 2017 to ease investments and accelerate the pace of Real Estate Growth in India.
Many affordable housing projects have been and are being created in rural and semi-urban areas as a result. Developers are being encouraged to move away from major cities to meet the growing demand for tier-2, tier-3 and tier-4 cities. This shift has become a lucrative business for the BFSI Sector (Banks & NBFCs) towards facilitating lending/ project finance to the affordable housing segments, which historically depended on unorganized lenders/ money lenders. There is a huge opportunity for affordable housing financers to tap into the informal lending market, which currently stands at 95% in both rural and semi-urban areas.

Many people returned to their homes after the massive reverse migration that occurred following the pandemic lockdowns. The rising popularity of hybrid or remote jobs has increased the demand for quality housing within smaller cities and towns. The demand for semi-urban housing loans is higher than ever before. Hybrid working has led to consumers looking for better homes on the outskirts of bigger and smaller cities and towns.

The Reserve Bank of India raised the limit on individual housing loans by cooperative banks to meet the increasing housing costs. This move allows the customers to have greater access to housing finance in rural and semi-urban areas. Rural co-operative banks were also permitted to finance small ticket size residential/ housing projects by the RBI, in response to the growing demand for affordable housing and increased access to credit facilities.

In the post-pandemic era, consumers have had to change their needs and are now looking for affordable home loans. These loans can be purchased in Rs. 10-20 Million ticket sizes. This includes people between the age of 27 to 40 years, those at the bottom of society and those with low income in non-metro areas. The rising interest rate has a limited effect on affordable housing finance customers, as they are less sensitive to it. These properties are mostly 90% to 100% self-occupied and, unlike urban markets, there is no or very less investment-driven demand.

The growing demand for affordable housing finance has prompted specialised companies to capitalize on it. They have experienced a growth rate of between 20-30% in FY 2022-23, and they are expected to continue that trend in FY 2023-24.
Housing credit costs have been more stable than other segments. The overall asset quality outcomes across all segments of housing finance were also better.

Healthy demand for affordable housing is aided by growing urbanization, nuclearization, a rising working population, higher per capita incomes, better access to credit, and increased affordability. This is especially true in tier-2, tier-3 and 4 cities.
This sector is expected to see a rise in demand as the economy recovers and inflation decreases. The government's goal of "Housing for All by 2024" will make the sector's outlook brighter.